Adventures in FeministoryKathrine Switzer, the First Woman to Run the Boston Marathon 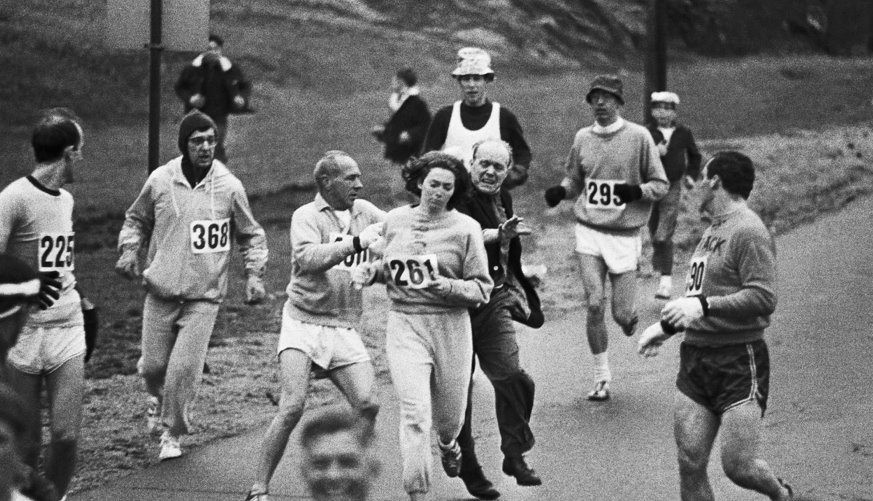 Growing up, Kathrine Switzer once told her father that she wanted to be a cheerleader because they seemed to be the happiest and most popular girls. Her father told her that life is for participating, not sitting on the sidelines watching others do things. Switzer took that advice to heart. Instead of cheerleading, she began running at a young age to help her get in shape to be an athlete—which she did initially through field hockey. Many people discouraged her from running, including her field hockey coach—not only was running not nearly as popular today as it was in the ’50s and ’60s, but women were seen as far too physically weak to handle the sport.

Switzer was still running when she enrolled in Lynchburg College in Virginia. One day, the men’s track team coach, (there was no women’s team), asked her if she would be willing to run in a meet. The event drew a lot of attention—many criticized her for trying to run with men. Switzer even received hate mail from people telling her that God would strike her dead for trying to run in a men’s race.

Switzer decided that Lynchburg College was not going to be the supportive environment she needed to be an athlete, so in 1966 she transferred to Syracuse University. She approached the men’s cross country coach and asked if she could train with the men’s team since, again, there wasn’t a women’s team for her to join. Switzer met Arnie Briggs, who worked on campus and was an unofficial manager for the team; the two started running together and he told her stories about the many times he had run the Boston Marathon. Hearing Briggs’s stories, Switzer was inspired and decided that she too wanted to run this most prestigious of races. Briggs wasn’t sure at first—many people at the time were outspoken in their belief that women were too fragile to run that long of a distance, let alone participate in sports at all. Briggs made a deal with Switzer that if she could run a practice marathon that they mapped out together, he would take her to Boston to run the official marathon. Switzer not only proved she could run 26.2 miles, she ran a whopping 31 miles in her practice race proving to Briggs that her gender did not affect her athleticism to the degree that many “experts” believed.

While there were official rules in the Amateur Athletics Union Handbook (AAU) about acceptable events for women in sports, there were no guidelines regarding the marathon and women, probably because the idea of a woman running a marathon was far too absurd to even consider. Switzer found her loophole because it was technically not against the guidelines, and she applied under the name “K.V. Switzer” instead of Kathrine.

The day of the Boston Marathon in 1967 was a cold and rainy one, but Kathrine showed up to race along with Briggs, her boyfriend, and a runner from the Syracuse cross country team. Many of the racers at the starting line noticed her and congratulated her. Only four miles into the race, however, this encouragement was replaced with heckling. At this point, the press bus full of photographers and the race directors passed Switzer and saw that (gasp!) a woman had infiltrated their good ol’ boys’ race. Many of the men on board startled yelling at Switzer and the race co-director Jock Semple for letting a girl into the most prestigious marathon in the country. Semple jumped off the press bus and went after Switzer. He screamed at Switzer to “get the hell out of my race and give me that race number.”

Jock Semple took his chauvinism to the next level when he literally tried to pull Switzer out of “his” race (cuz you know, being the organizer made the race belong to him more than it did for the actual runners). However, Switzer’s boyfriend and friends pushed Semple off of her and Switzer ran like hell away from him and the rest of the race staff—all 26.2 miles to the finish.

Switzer finished with an unofficial time of 4:20 because at the finish she was disqualified (only male runners were recognized as finishers at this time). Her story, however, managed to make a splash with national and global headlines, which further brought attention to capability of women in sports. Switzer’s finish in Boston got a lot of people questioning whether the “fragility” of their bodies really was what kept women out of sports, or whether it might have something to do misogyny…

After Boston, Switzer kept fighting for women’s rights to compete in sports. She started the Syracuse Track Club with meets that included races for women. In 1970, Switzer returned to Boston and ran the marathon again, this time shaving off nearly an hour with a finish of 3:34. By this time, the race did record her finish (and there were no mid-race attacks). But it wasn’t enough for Switzer to merely compete in the Boston marathon herself—she continued to pressure the Boston Athletic Association (BAA) to allow women to compete in long distance racing and by 1972 women were officially welcomed to run the Boston Marathon (the same year that Title IX was passed, and probably not a coincidence). One of her biggest marks on the wide world of sports, however, came from her instrumental effort to get the women’s marathon included in the 1984 Olympics.

Throughout her lifetime Switzer has competed in 35 marathons, including running the Boston Marathon eight times. She has made her career in public relations and sports marketing. She created a racing series for women called the Avon Running Global Women’s Circuit. Switzer’s work with women in running has taken her to 30 countries, encouraging women to empower themselves through running and athletics. Women’s marathons are hugely popular and accepted these days, thanks in part to the legacy of Kathrine Switzer. Women are racing in and consistently beating men in ultra marathons, (which are any races longer than 26.2 miles, some of which are races in the 150 mile range). Switzer proved that women were not too “fragile” for marathons, and that women can run the same distances that men do in marathons and ultras.

Switzer will be featured in the 2013 PBS Documentary Makers: Women Who Make America, along with women like Gloria Steinem, Hillary Clinton, and Ellen DeGeneres. Check out her website for more information about her inspiring story!

I love this perpetual self promotion. Bobbie Gibbs won the marathon in 67 68 69 long before this false profiteer came along. Btw she ran an hour faster as well. This chick is a self promoting joke never even close to a serious runner

Kathrine Switzer broke the three-hour mark in the marathon and once won the NYC marathon. if that's not a serious runner, then I don't know what is. 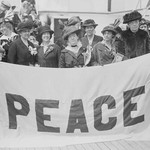 by Ariel Gore
The founder of Mother’s Day was a righteous, anti-capitalist activist.