The weekend is over and we’ve (for the most part) washed off the dust from Auditorium Shores. Check out our coverage from the third and final day at Fun Fun Fun Fest in Austin, Texas! The pared-down ferociousness you can hear on Le Butcherettes’ 2011 album Sin Sin Sin comes so much more alive in person. Teri Gender Bender struts and stretches around the stage, imploring and egging on the audience with her expressions and movements. Although there was no fake blood or flour (which she’s occasionally deployed) this time, Teri commanded with her grimacing expressions, slinking around with her guitar in a stained vintage skirt and bright red lipstick, dragging around the mic stand like a bad habit, daring the audience to give themselves over to her. She would address the audience in Spanish, purposefully sing off the mic (Pitchfork livecast be damned!), and sing into the crowd, treating the outdoor audience like that of a packed punk club. In other words, giving zero fucks and kicking serious butt. Definitely look for this trio when they come your way! —Kjerstin Johnson Asobi Seksu hit the Orange stage before the rain started up, and the windy, sunny mix was the perfect setting for this New York City band. Frontwoman Yuki Chikudate’s bright, clear vocals layer melody over shoegaze rock, but unfortunately the mixing for their show made it difficult to understand some of the words (and not just because some of their songs are in Japanese), and her already-light soprano got lost occasionally in guitarist James Hanna’s powerful droning. The set was still good, overall, and I totally saw Chikudate and Hanna scrambling to catch the opening of experimental-metal band Boris later that night. For better mixing but just as fun pop, check out their new album, Fluoresence. And while I think band Tumblrs are usually hit or miss, theirs seems like a hit. —KJ Mates of State are multi-instrumentalists Kori Gardner and Jason Hammel, and they played mid-day at FFF Fest Sunday. Their performance was made more epic by a sudden rainstorm, and Gardner and Hammel clearly loved every minute of it. They played “Palomino,” which has probably been stuck in every single head that has ever heard it, right as the rain started, and it was impossible to tell if the dehydrated crowd was dancing to the song’s energetic, anthemic chorus or to thank the clouds. Such is Mates of State’s gracious, friendly playing style that the energy was infectious and either scenario was likely. Their peppy set endeared me to them anyway, but their gush-y picture of their (ADORABLE) children with Ryan Gosling at the festival (and their whole blog in general, really) made me love them. In other news, Gosling was seen at Lykke Li, Big Freedia, YACHT, Mates of State… I think he probably wants to be a Bitch correspondent. Right?!? —Katie Presley Amanda Warner of MNDR (pronounced “em en dee arr,” not “minder” as I’d been saying it in my head) took to stage sporting black vinyl pants, platform velour shoes, a neon green streak in her up-do, and a pink t-shirt with Divine’s face on it, looking like the raddest babysitter ever, especially once she started her one-woman show. I had only heard a few of her songs before, but her live act showed that she was more than a dance-y beatmaker. Warner had a huge amount of stage presence, and performed earnestly—fist-pumping, bum-shaking, and audience-encouraging. I mean, I respect anyone who has to entertain hundreds of people alone on a stage, but she was great, and never missed a beat, even when her mic got unplugged momentarily or when it started to sprinkle. She sang some songs off a forthcoming album, “a tribute to Marina Abramović (“Wooo!” I shouted, alone),  and dedicated her final song to Occupy Oakland. I also appreciated that she gave shout-outs to Austra and Grimes, two other electronic female artists sharing the stage with her that day. Speaking of Austra….—KJ

Austra has gotten a lot of love from Bitch staffers in the past, and rightly so! The entire (touring) band is female, the lead (opera-trained!) singer identifies as queer, and the music is irresistible. Mixing dark electro backgrounds with singer Katie Shelmanis’ dreamy, haunting vocals, Austra’s was the kind of set that makes you forget that you’re tired and dirty and surrounded by be-feathered hipsters. The crowd, speaking of which, was enormous and appreciative. The band played most of their debut album, this year’s Feel it Break, which we’ve reviewed on this site as well as in the Reverb issue. (Spoiler alert: We’re fans!) This was the last show I covered at FFF Fest, and it was an ethereal, gorgeous end to the weekend. —KP Thanks for reading, and thanks Fun Fun Fun Fest!

My name is Katie Presley, and I approve this message. 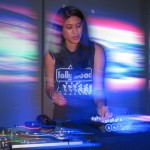