The literary world gained a valuable new addition last week with the launch of new literary journal THEM, which focuses on the work of transgender writers.

Debuting on December 13, THEM proclaims itself to be the nation’s first literary journal to specifically focus on trans* voices. While there are numerous literary journals that highlight LGBT issues and writers, and a couple trans*-focused anthologies, THEM is the first American journal that publishes only the work of people who identify as “within the trans* umbrella” (using the term “trans*” with the asterisk to include who have non-binary transgender identities). The volunteer-run biannual journal features writers from around the country, seeking to create a space that amplifies trans* voices.

Founding editor Jos Charles sees the magazine as a form of resistance, with its publication aiming to create a space where trans* folks can interact and speak their minds—even when what they have to say is complicated and controversial. “Television, porn, literary journals, personal blogs, all propagate narratives and symbols about who trans* folks are,” says Charles. “Typically, folks like to conflate our differences and squeeze us all into one discernible narrative… Cis readers seem to really like seeing us [either] happy or dead. I would like THEM to be a place where that narrative can be upset—whether by exploring other stories or contextualizing the familiar ones.”

Charles also thinks that it’s crucial to keep the journal as accessible as possible while expanding its reach. “Ideally, this would mean always having the whole issue be free online. I’m hoping for us to be able to have hard copies of forthcoming issues, if not this issue. That way folks who have money and would like to support us could buy hard copies if they could.”

THEM’s debut issue, which is currently available to read on their site, does not disappoint. The 110-page first issue includes short stories and poetry from 19 different authors. The closing piece, Van Binfa’s “Four Years,” was an especially emotive and powerful way to end the collection, telling an account of the evolution of the author’s relationship with his mother.

What happens in the fledgling journal’s second issue may be different entirely. “I like the idea of incorporating more visual art, whether that is through a magazine format or a more interactive online platform,” says Charles. “Whatever format is most conducive to the trans* folks drawn to it is what I’d like it to be.”

If you or someone you know is interested in submitting work for the next issue of THEM, submissions open again in January for their summer issue.

love & resistance to all of you!!

Relevant: Coming out as Bi When You’re Muslim and Married 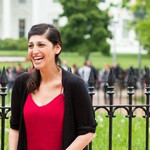 by Zahra Noorbakhsh
I was nervous to come out to my parents, but I was infuriated by pundits who kept saying Islam and LGBT identity are at odds.