Stop the presses! Science has released a groundbreaking study! According to new research at the University of Michigan, bonding with friends makes women feel good.

Okay, so definitely not hot news, right? But what IS interesting is the way newspapers and websites reported on the study. The U of M researchers found that after emotional conversations, women release progestrone, a hormone that reduces stress. But apparently mainstream press can only describe intense, personal conversation between women with one word: GOSSIP!

Check out the top ten most popular headlines via Google news about the study: Women who gossip can live a happy and healthier life, study finds. Gossiping is good for women's health Gossip is good for women's health, scientists claim Friendship is a mood uplift Good health from a good gossip? Gossiping Reduces Anxiety and Stress in Women - A Study Gossipping can be healthy: Research Now Women Have An Excuse Idle chatter makes women healthier, happier. A scientific take on female friendship.

Ouch, at 20 percent accuracy, 80 percent "Women are Gossiping Gossip Hounds" that's a failing score, headline writers. You know who describes convivial woman as gossipy? 17th century Church leaders when they put women in the stocks for talking too much. You're writing about science, people! Can you please move past trivializing words like "gossip" and "chatter" and onto big 8th grade words like "conversation"?

So personally I see two problems with using the word gossip to explain this study. First off, but summing up conversation between women as gossip, it plays into the age-old perception that women have nothing important to say. Ever since Aristotle proclaimed silence as "women's glory" media from the Bible to modern television have declared women are just too damn talkative. In the 1600s, as mentioned above and explained in Suzanne Romaine's book Communicating Gender, women were punished via the stocks or public submersion in water for talking too much. Gossip has connotations of bitchy gaggles of trash-talking mean girls. We can all agree that typical women in personal conversation do not fit that image, yes? Yes. Let's move on. 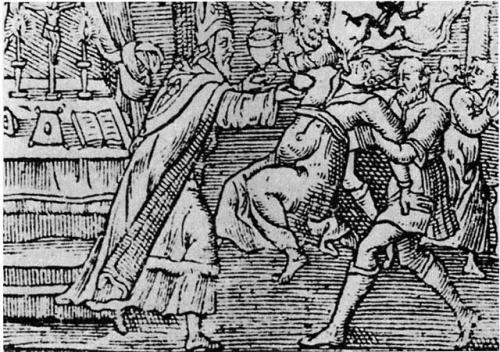 Secondly, if anyone outside the science world cares, "gossip" isn't accurate to describe this study. Gossiping is defined as "trivial, chatty talk." The conversation that released progrestrone in the U of M women was provoked by deeply personal questions meant to facilitate bonding -- hardly trivial stuff. Sadly, the only headlines that got the study right (the third one above, from SiFy and the last, from the Los Angeles Times) are pretty dense to read, jumping straight from bland opening sentences into thrilling press release quotes like, "This study establishes progesterone as a likely part of the neuro-endocrine (brain-hormone) basis of social bonding in humans."

Here's my billion dollar theory: the study's findings were too common sense to report just straight, so catching readers meant having to sex up the findings with some stereotyping. Looks like it worked - the "Women who gossip have healthier lives" is the second most-read article on the NY Post site.

Really?! A good thing like basic human bonding just isn't interesting enough unless something negative is attached to it. Nothing like a little bit of stereotyping to get the nation's attention. As if attention needed to be drawn to the fact that women bond by having deeply emotional and relevant conversations. Shouldn't all that money spent on scientific research be spent on something of substance, like, cures for cancer, AIDS, or narrow-mindedness??? Seems the University of Michigan should be deemed with a cape and tights. Thanks Captain Obvious... *smh*

I found this study and the language associated with it pretty interesting. I pieced together a small video to show the beauty in women having meaningful conversations as a response. Hope you enjoy! http://www.youtube.com/watch?v=QuX5EibzFE0