The healthcare debate this week has certainly seen a lot of fingerpointing. In an effort to quash false rumors surrounding Obama's new healthcare plan (please let's never discuss the phrase "death panels" again), the White House went so far as to launch its own "reality check" website. But one issue that's missing from the White House site is abortion. Despite the lack of an official White House debunk, the public dialogue on abortion has been just as packed with misinformation and exaggeration as the rest of the dialogue on healthcare reform.

That idea is aided by misleading statements from mainstream politicians. Representative John Boehner (R-Ohio) penned a piece in the National Review spelling out his take on Obama's healthcare plan:


"Fact: The bill as currently written will allow the federal government to classify abortion as an "essential benefit" — a health-care right that would be guaranteed to all Americans. This will make it illegal for health-care providers nationwide — even Catholic and religious-based hospitals with missions that reflect a fundamental moral objection to the killing of the unborn — to provide anything less than abortion on demand for anyone who seeks it."

But when the Denver Post ran a health care fact check, they showed that Boehner's "fact" is actually false. The Post explains that Obama's current health care plan does not override the federal law that bans Medicaid from paying for abortions except in cases involving rape, incest or when the mother's life is in danger. An amendment pushed by Lois Capps (D-CA) allows public and private healthcare plans to cover abortions in other cases, but they can't use federal dollars.

A healthcare expert on ABC's own healthcare fact check said it was still "unclear" whether public healthcare plans under Obama's plan could pay for abortions, despite noting that none of the bills under consideration say abortions should or could be paid for with federal dollars.

Although Obama has a strong pro-choice voting record, he's backed away from pushing for abortion coverage in his fragile healthcare reform plan. The Post quotes him explaining, "I'm pro-choice, but I think we also have the tradition in this town, historically, of not financing abortions as part of government-funded health care."

Personally, I find it disappointing that in the midst of the largest healthcare reform our nation has ever experienced, it looks like national abortion laws will remain where they were 30 years ago.

I agree with Obama in leaving some things as they are especially when it comes to abortion laws and such. He may be pro-choice but he has to also consider the other half of the population that didn’t vote for him (republicans) who traditionally have been Pro-life.

It’s good campaign strategy if you ask me. Given that his popularity polls have been gradually going down and with so much debate regarding the healthcare reform plan, I say let sleeping dragons lie. While his pro-choice stand may be forward thinking and pro-modern women, he is also a religious man, and as such maybe he is right in saying to uphold ‘tradition’. I think this is a never ending debate and I think to have a law to reinforce one side over the other is premature and very undemocratic.

Pro-choice or pro-life should be a right availed to every woman without shoving it down one’s throat. 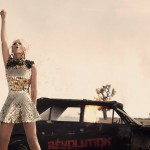 by Evette Dionne
After Weinstein, women are more vocal than ever.