A Brief List of Emcees To Know and Love | Bitch Media

A Brief List of Emcees To Know and Love

It’s popular to hate on women in hip hop. Nicki Minaj is too cocky. Iggy Azalea looks bad without makeup. Li’l Kim “sounds like she took an Ambien twenty minutes before she started rapping.”

The tendency to dismiss women in hip-hop unfortunately belittles the awesome talent and power of female emcees. The documentary My Mic Sounds Nice: The Truth About Women in Hip Hop reported that in the late 1980s and early ‘90s, there were more than 40 female hip-hop artists signed to major labels. In 2010, there were three. MC Lyte, the first female rapper ever to sign with a major label (in 1988), noted on NPR that the future of women in hip hop looks grim: “We’ve gone backwards. This is pretty much what it was like when women weren’t able to get major recording and release opportunities.”

In the spirit of recognizing artists who don’t get enough love, here is a list of five of my favorite female and agender emcees that I don’t think get enough attention.

There is an immediate accessibility to Angel Haze’s music. Angel (who identifies as agender) makes very musical beats, intertwining singing with flows. Their acoustic tracks are every bit as good as their raps, and their dark and twisted past comes forth in their poetic lyrics. You might know Haze for the remix of Macklemore’s “Same Love,” or for freestyles over Kanye West songs. But Haze’s original songs are just as great; a heavy-16th note beats rival those of Wiz Khalifa, and lyrics discuss battling depression, and coming to terms with their self-proclaimed pan-sexuality from the lens of their heavily religious upbringing.

There’s something smooth and contemplative that courses through Pacific Northwest hip-hop, and Gifted Gab is no exception. Not to be confused with Blackalicious frontman “Gift of Gab,” Gifted Gab hails from Seattle, and her fast, rhythmic flow could do laps around some of the highest paid rappers. Her sound is more melodic than most rap: she implements piano and horn lines, when so much of today’s mainstream hip-hop just turns to the synthesizer and calls it a day. Gab raps about smoking and screwing and how she’s hotter than your son’s girlfriend. She owns who she is, rather than playing the sex object.

Sasha Go Hard’s moniker aptly applies to her style. Not for the faint of heart, Sasha Go Hard’s gritty beats make you want to put on your thizz face and get your booty low. Where Angel Haze is melodic and introspective, Sasha Go Hard audibly gets in your face with a thick delivery and hard beat drops. Her most recent album, The Knockout, came out in 2013. Sasha toured frequently throughout 2014, garnering an increasing amount of attention. Her Chicago South Side roots shine through in her dark, slow, haunting beats, highlighting powerful, posturing anthems like “Give No F*ck” and “N***** Ain’t Sh*t.” Much like Angel Haze and Gifted Gab, Sasha, too, is an early ‘90s baby, but maintains a face, voice and hardened confidence that could rival Biggie Smalls in commanding presence.

Lee Mazin’s sound is a mix of original melodies with reconstituted samples of bygone hip hop days. Mazin hails from Philly, and her signature speedy flow dances evenly, syncopated over her range of beats, instantly captivating the listener. She weaves in and out of singing and rapping, and she writes and produces all of her own material—an uncommon trait in rap. Mazin still exists just below the public eye, but like her colleagues, she arrived on the scene recently and is working her way up, having performed and recorded with heavy hitters like Talib Kweli, Young Jeezy, and Rick Ross. She’ll be releasing her first EP this year, including her swift and abundant freestyles.

Kristine Flaherty (AKA K. Flay) produces beats and rhymes more obtuse and experimental than some of the other emcees from this list, but her style is clear, concise, and still approachable. K. Flay grew up in suburban Illinois, and after graduating from Stanford in 2007, she has become a part of the Bay Area indie hip hop scene. As with a growing number of non-mainstream artists, Flay is on Soundcloud with a bevy of remixes and a recent EP called Life As a Dog. Her innovative sound and lyrics are self-reflective and evocative without being overly indulgent or melodramatic. Flay occasionally moonlights as an indie songstress and her singer-songwriter aesthetics embellish her hip-hop, making her an usual hybrid. Whenever she does make a full-length album, I’ll be the first one in line to get it.

Rose Finn writes about music for the Portland Mercury and blogs about sexual politics. Check out her writing at www.rosefinn.com.

NOTE: This post originally used “her” pronouns for Angel Haze. Thanks to a reader for pointing out the error, it has been updated with the correct pronouns. 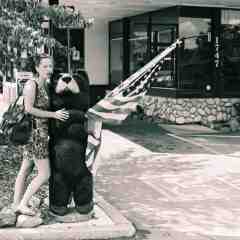 angel haze identifies as agender. it's nice that you used 'they' pronouns, but throwing them under the banner of 'female' is pretty gross. like, don't do that shit to trans people. this is intersectional feminism 101 here, bitch magazine should be getting it right by now.

I sincerely apologize for the error—the writer wasn't aware that Angel Haze is agender and we should have caught the error. This article has been updated to reflect that it's a list of female and agender emcees and the headline has been changed to be gender-neutral as well.

They also go by the name Raeen Roes now, and would like to be called that, just so you know. Although all of their music will stay under the artist name, it would be helpful to clarify that they don't go by Angel Haze anymore.

Where did you read/hear that? Their twitter still goes by Angel Haze

This is an awesome list! I look forward to listening to a few emcees on this list that have missed my radar.
I think you guys would also love Nitty Scott, MC.

You should really consider adding Rapsody from Raleigh, NC to this list.
https://www.youtube.com/watch?v=5kSoVSgWK9o
https://www.facebook.com/rapsodymusic

She's incredibly talented and speaks truth to power on all sorts of issues. Enjoy!

Watched a few of her videos & am a little in love. Thx for the tip.

Tink has also been around for a while:
https://www.youtube.com/watch?v=PV7m4c4MU9Y

Hand Job Academy isn't on this list? Criminal. Clara Biznass, Ash Wednesday and Uncle Meg are my favorite female MCs, and you should give them a listen.

Great list and wonderful tracks to listen and thanks for sharing.