How are college students fighting rape culture on their campuses? We have five great examples.

College students from across the country (and even Ireland!) entered to win the Consent Revolution Awards sponsored by art group FORCE: Upsetting Rape Culture. Today, we’re excited to announce the winners!

Two weeks ago, FORCE tricked the internet into thinking that Playboy had dramatically altered its party school list to promote consent by publishing “Playboy Top Ten Party Commandments: The Ultimate Guide to a Consensual Good Time.”  The viral hoax got millions of college students talking about good times, good sex and consent.  The Consent Revolution Awards is another opportunity for the media to give consent the platform it deserves.

Students entered their consensual-sex promoting actions by posting photos and descriptions to FORCE’s facebook.  The posts with the most “likes” won.  You can see all the entries here.

Here are the five winning actions that will get you fired up for consensual sex.

With a brilliant graphic, multiple approach, and over 1,000 Facebook likes, UCLA’s 7000 in Solidarity takes first place! UCLA’s 7000 in Solidarity gets its name from the recognizing the reality of sexual violence. Stats show that one in thrre women and one in six men will have survived sexual violence in college. That means 7,000 Bruins will be survivors of sexual assault by the time they leave the university.

Students who want to stand in solidarity with their peers can to only engage in consensual sex, to be an effective bystander in preventing others from acting without consent, and to support survivors of sexual assault.

#2  All Students For Consent at Whitman College
Students at Whitman college turned the victim-blaming phrase “asking for it” on its head to promote consent. The campaign leaders write: “The purpose of the campaign was to put a twist on the insulting phrase that has often been used in victim blaming, such as, ‘She was asking for it by wearing that miniskirt,’ in which the ‘it’ is sexual violence. However, we wanted the ‘it’ to mean ‘consent’ so that when people are asking for ‘it,’ what they are asking for is consent!”

On “Ask For it Day” students chalked up sidewalks, poster-ed up bulletin boards and gave students consensual kisses (chocolate of course!).  The event culminated in students sharing their consent stories and receiving “I ask for it” temporary tattoos! SWAT is doing so much to promote consent, they couldn’t pick one action to enter.  We pooled their likes to give the team fourth place.  From consent-promoting coaster campaigns to videos highlighting sex-positive communication, these undergrads got it going on!

One of their campaigns spoofs the tired “That’s what she said” joke. The “10 prevention tips guaranteed to work” were printed on coasters and distributed to bars and restaurants throughout Eugene as part of the campus Women’s Center’s Redzone campaign. The Redzone refers to the first six weeks of the fall term when sexual assault is statistically more common on college campuses. The coasters change the common message that tells people to avoid getting raped, and instead tells potential perpetrators to not rape. “We know that is rare to actually see people having honest conversations, and we wanted to show our peers that getting consent and talking about sex doesn’t have to be awkward!” writes the group.  A variety of ways for college students to negotiate sex can be seen on SWAT’s website.

#5: I Always Get Consent at ASU
According to their entry, “For the past four years, this program has educated the largest campus in the country about what sexual assault is, how to prevent sexual violence, and the importance of defying rape culture.” Last year, “I Always Get Consent” got over 1,000 college students like consent in person with consensual cardio classes, movie screenings, T-shirts, an interactive presentation about challenging rape culture. They say, “Consent is sexy, and we’ve made it our job to spread the word.” 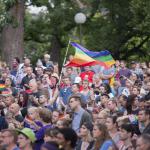