Some of us Bitch staffers went to see Magic Mike on Friday. (So did a bunch of other people, but weirdly not as many as went to see Ted. WTF?) As we said in our podcast review, we all liked the movie and, though it is just as chocked full o’ beefcake as the trailer would have you believe, we were still surprised by a few things.

It’s rainin’ spoilers from here on out, folks!

McConaughey as Uncle Sam? Not all that surprising.

The female characters don’t suck. Call me pessimistic, but I went into this movie fully expecting the female leads, Brooke and Joanna—played by Cody Horn and Olivia Munn—to be walking stereotypes who existed only to serve the males, both plot-wise and sex-wise. It was refreshing, then, to hear Olivia Munn talk about her schoolwork while booty-calling Channing Tatum and proudly hitting on both women and men (not because he asked her to but because she felt like it!) or to see Cody Horn be both rational and irrational in her interactions with her brother and his newfound gang of merry strippers. Yes, this is a movie about men and the women are most certainly play supporting roles, but at least they aren’t tropes on top of that.

It isn’t a romance. Promos for this film make it seem like a rom-com with some butt action, but at its heart Magic Mike is about students and teachers. The primary relationship in the film is between Mike and his protege “The Kid” (Alex Pettyfer), and I’d argue that the secondary relationship is between Mike and Dallas (Matthew McConaughey). Romantic relationships come in at a distant third, or maybe even fourth after the camaraderie among the Xquisite male strippers. Overall, the centrality of the mentor/mentee dynamic makes this more of a Karate Kid or a Training Day than a gender-swapped version of Pretty Woman. Who knew?

Not everyone is white. Are most of the characters white? Yep. However, one of the “Cockrockin’ Kings of Tampa,” Tito, is Latino (played by Adam Rodriguez), as is the crew’s DJ (played by comedian Gabriel Iglesias), and Olivia Munn, who is Asian, plays Joanna. It’s depressing that three non-white characters who have names and speaking roles would surprise us, but when it comes to big-budget releases we’ve seen much worse.

Mike never opens a custom furniture store. Of course the stripper-with-a-heart-of-gold at the center of this movie, Magic Mike, has dreams that extend beyond the “thumpa thumpa” bass of the stage at Xquisite. In the first five minutes of the movie we learn that he’s saving his money to open a custom furniture store, and later we see him apply for a bank loan to try to make it happen. Later still, though, we see Mike give his savings to a drug dealer to bail out his protege—and we never see him get paid back. In fact, we’re led to believe that he never will be paid back. The film ends with him jobless and broke, sans furniture business or anything close to it. We don’t even know if he and Brooke will make it beyond their first kiss! So much for a happy ending, right?

A depressing, drugged-out barf scene can be made adorable if you add a miniature pig. Of all the man meat in this movie, the standout star just might be Herman the Pig (played, IMDB tells me, by Maynard the Pig). The pet of Nora, The Kid’s no-good love interest, Herman steals an otherwise bummer of a scene by snacking on a pile of party-induced puke. It’s supposed to be a turning point for Magic Mike and The Kid, but the pig is so cute you hardly notice that the humans have hit rock bottom! Bonus: One Thing That Definitely Won’t Surprise You About Magic Mike

Matthew McConaughey plays a mean shirtless bongo. McConaughey not only plays and sings an original song called “Ladies of Tampa” in the movie, he also plays the bongos in a scene that he apparently requested be added to the script. “That was my idea,” said McConaughey. “Well, I’m introducing this guy, played by Kevin Nash, a WWF wrestler, and he’s Tarzan, he’s one of my guys and he plays Tarzan, so it’s a jungle theme that he comes out to. So I said, ‘I wanna get the djembes and really make a jungle beat and call him out.’ Now it’s a pretty good scene but it probably won’t be as well remembered as my October, 1999, get-arrested-for-playing-the-congas-in-the-birthday-suit scene.”

I wouldn’t be so sure, dude. Now you’ve just got to start practicing for the Broadway musical version.

For our review of Magic Mike, check out our Bitch Popaganda podcast!

This is what the movies are for – two hours of escapism in whatever way the audience most wants it. The objectification, celebration of “casual” sexual encounters, and other male “fantasies” that have been normalized and then flooded throughout my psyche by the media since I was born, has been reversed in ‘Magic Mike.’ Every day of our lives, we are bombarded by images of skinny/tan/rich/blonde/whatever-“perfect”-is women, and this is two hours of the opposite. So shouldn’t I be thrilled to enjoy it, while men have to deal with the objectification, for a change?

But instead of settling in for two hours of salivating over Channing Tatum’s hip thrusts, I started thinking about how this would make the man I love the most feel. And don’t get me wrong, he has the most beautiful everything, he’s absolutely perfect to me in every way—he’s my Channing Tatum only better. But as I sat watching tan, hairless men with six-packs fulfilling the female fantasies of, (as the fabulous in this one Mathew McConaughey says,) “the husband they never had, that dreamboat guy that never came along…” I couldn’t quite relax. I don’t want any man in my life thinking that what I want is a 22 year-old muscled and hairless male dancer. I don’t want him to look down at his body and his “moves” and think, “If she likes that, how could I ever be good enough?”

So why did I start feeling like crap? I responded en masse at womenwellloved.com (Article: NOT SO MAGIC MIKE: ARE WOMEN BECOMING THE MEN THEY DESPISE? http://wp.me/p20oFA-6e)

I dunno, my husband doesn't think that I want a guy like the ones in Magic Mike, because if I did, I would be with a guy like that. Besides, he also knows that humans aren't attracted to just one person, or just one type of person, and he's comfortable knowing that I think other men besides him are attractive, and that I'm comfortable knowing that he thinks men besides me are attractive.

"I don’t want any man in my life thinking that what I want is a 22 year-old muscled and hairless male dancer."

But why would you think that by seeing this movie, your partner would think that you want a man like the ones portrayed in the movie?

"I don’t want him to look down at his body and his “moves” and think, “If she likes that, how could I ever be good enough?”"

Then don't let him think that. If you think he thinks that because you saw a movie with attractive men in it, then it sounds like there are some issues that you need to resolve with him. Don't feel like crap for finding other men attractive.

Some husbands do feel that way though - and it has everything to do with the amount of energy spent in women's circles talking about the movie, planning date nights for the movie, getting babysitters, etc. I mean my wife works hard to meet my needs, but she has never worked "that hard." She's never gotten a babysitter for a night just so she could enjoy herself or let herself go in enthuasistic bliss in the bedroom.

My advice to the ladies is real simple - enjoy the film. Bring the extra libido home. Plan a night of hot sex with your partner, you'll find that he doesn't look poorly upon the trip after that. In fact, he we secretly be hoping that a similar movie comes out real soon for a repeat performance. 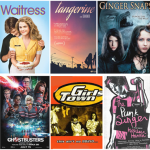