For Realz?: A Large Family Show for the Blue States | Bitch Media

For Realz?: A Large Family Show for the Blue States 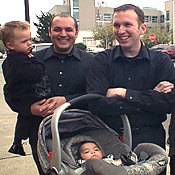 Move over, Jon and Kate, and scoot down the bench, all you Duggars -- there's a new big family reality show on the block! It's called Fostering Love, and it's got a uniquely Californian twist on the genre: a same-sex couple expanding their family through pretty much every type of reproductive technology available. Also, they move to an alpaca farm. It's awesome.

Okay, I think a lot of these series about big families start as hour-long specials on Discovery, and if that's so, this family's got quite a lot of material to work with! So when the show starts, dads Mark (a former foster child) and Jim are raising Mark's biological son Andrew (16), a two year old son named Dillon they adopted through the California foster care adoption program and who's been diagnosed with muscular dystrophy, and an infant girl named Olivia that they're fostering and hoping to adopt. Two other foster children had just been taken away because their biological parents had requested them back, and Olivia had almost been reclaimed by her parent too. The family is also in the middle of moving from the San Francisco suburbs to a farm outside Sacramento to raise alpacas.

As the show goes on, the following series of events occur: it turns out they ended up getting not just alpacas but an entire farm of livestock, including two pregnant llamas. Dad Jim is considering fathering his own biological child with a childhood friend, who is considering moving in to help them raise the kids. Son Andrew meets a friend at his new school who's in foster care himself and his fathers agree to adopt his friend too. Jim and Mark get married in San Francisco City Hall before Proposition 8 passes. They finalize Olivia's adoption. And at the end of the show, the credits reveal that two more foster teens have moved into their house. Wow, that's a lot of activity -- because man, sometimes a whole episode of Jon and Kate plus 8 is just them trying to get all 8 of the kids' shoes on.

I would totally watch a show about Jim and Mark -- though I did look online and it sounds like they ran into some trouble after the show aired and have now moved somewhere else, which made me a little sad. I hope they took the livestock with them, though -- on top of everything else, the baby alpacas and llamas were adorable.