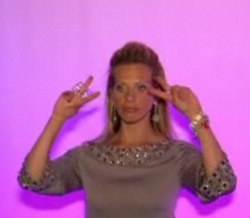 Did you watch the preview of the Real Housewives of New Jersey yet? Five women, three of whom are related by blood, marriage, or both, and all of whom are implied to have possible mob connections (or at least mob pretentions). One of them, Dina (at left), is married to the younger brother of her sister's husband, and works in the combined family's event planning business. Dina spends most of the RHONJ preview episode telling everyone how rich she is, how unpleasant she is to work for, and terrorizing her assistants and family, all of whom "affectionately" refer to her as a bitch. Dina's response: "If you think I'm a bitch, then bring it on." Intriguing, right?

Like RHONY Bethenny, this is not Dina's first time on reality TV. So, if you're as intrigued by Dina as I am, may I alert you that the WE network will be replaying Dina's first reality TV show this weekend? Namely, they're showing her episode of My Big Fat Fabulous Wedding, where she spends over a million dollars on her wedding as a passive-aggressive way of getting back at her now-husband for cheating on her during the engagement. Yikes!

As Sopranos watchers already know and RHONJ watchers will soon, the classic mob (or mob-acting) wife asserts sexual power (or lack thereof) through a particularly abrasive type of domestic materialism. (I'm thinking not only of Dina, but also of one of the NJ wives, who says, with the accent, "happy wife, happy life," when discussing the purchase of million-dollar jewelry.) I'm looking forward to seeing how this dynamic ends up playing out on RHONJ this season. Well, either that, or I'm just coming up with lame justifications for the fact that I deeply enjoy watching TV shows about people I don't like! Ooooh!! I love it!!!

I am from NJ and live in NJ and will probably always live in NJ. While there is certainly basis for this stereotype of a NJ woman, we're certainly not all like this! In fact, most "Jersey girls" that I know and love are independent, hard-working, conscientious, and don't give a hoot about manis and/or pedis.

I would hardly agree that the wives in the Sopranos assert any sort of sexual power, given that their husbands all have "goomars" and don't rely on their spouses for sex. The only power that I see they have is domestic--they do all the cooking, cleaning, and practically all the caring for children, excluding the lavishment of expensive gifts that the men usually take care of. Tony Soprano eats salsa out of a jar when Carmela kicks him out of the house.

Relevant: The Brilliance of Effie Brown 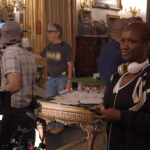 by Amy Lam
Effie Brown is the only reason to watch Project Greenlight. But she is a dang good reason.