Why is it always a race war on America's Next Top Model?? Natalie, the contestant who got booted this week, has a spiteful interview up on the E! website, where she says she must have lost because Tyra is giving preferential treatment to the two remaining African-American contestants, Aminat and Teyona.


"Tyra definitely has a soft spot for Aminat and Teyona. I think she just loves [their] personalities. I feel like they're most relatable to Tyra, since Tyra was a black model struggling. I think she has a hidden emotional connection with the black girls, and I think that's where a lot of favoritism comes from. I'm not accusing her of it, but that's just my opinion.

Well, yes, the whole point of the show is to find people whose personalities Tyra likes! Natalie's departure couldn't possibly have anything to do with the fact that 1) Natalie seemed really disoriented by Brazilian culture, 2) arguably looked pretty vapid in all her pictures, 3) has already made a number of racially-awkward statements, and 4) seems kind of boring. Or the fact that Teyona takes lovely pictures and Aminat is totally adorable.

Or the fact that plenty of other African-American contestants have already been eliminated on this season, and a not-always-the-most-photogenic Caucasian girl is still in the game too. Or that white models have won slightly over 50% of the time over the life of the show. (6 white winners, 3 African American, 1 Hispanic, 1 biracial). No, it must be racism favoritism, because how on earth could two African-American models possibly be better than Natalie?? Sarah Palin, is that you?

And why did Natalie come off so badly in the show this season, if she's so awesome? She blames, as always, editing. Yes, that must be it. Editing.

Let's not forget that infamous astonishment of being in the poor part of Brazil. She seemed to not quite believe that such a thing where true. This show actually colonizes on the"drama" that prevails throughout this house, from the racial divison within the house to the insecurites of not being up to Tyra's standards. I, sometimes wonder why Tyra never mentions the pressure and divison amogst these girls after the fact?

i totally agree with you. but thought you would like to know that the season two winner is also biracial (Canadian and Mexican) I believe.

I think if anything, Tyra is a self-loathing black woman who constantly goes out of her way to look more white and follows a caucasian standard of beauty. Tyra had a show celebrating black models on her talk show and not one of them looked anything darker than very tan, and all had weaves.

There IS a lot of editing, but it's a reality show and you can expect for anything you say to be edited into whatever narrative they want to sell. It's happened every cycle, so she should have known. On one hand I agree that they edit things out of context, but on the other, she came up with the original material and gave them something to work with.

i really love this magazine, and all the blogs within it, but this really got my hackles up. this is a really snarky article. it might be the 'Sarah Palin, is that you?' but really, this is just picky and self-righteous read.

It is about personality. Don't you guys remember the season with the twins? She said EXACTLY that personality is more important than modeling ability.

Watching the show right now, and several of the offensive bratty comments Natalie made... were in fact, a full sentence that needed no editing at all.
She made herself look like a bitch. I wish someone would have knocked her down a peg.

Relevant: Our Nails Will Shine Forever 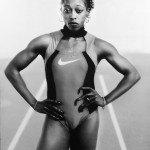 by Brooklyn White
Nails are emblems of honor.