For Realz?: It's A Noun, It's A Verb, It's The Amazing Race Next Week | Bitch Media

For Realz?: It's A Noun, It's A Verb, It's The Amazing Race Next Week

As your feminist reality TV blogger, I’ve got the standard (short) list of complaints about The Amazing Race to run through: why hasn’t an all female team ever won in the 14 seasons the show’s been on, are the women being unfairly edited to look more shrewish under pressure than the men, etc etc., but I’ve got a new one for you!  Looks like we’re going to have a discussion over the impact of the word “bitch” next week!! You can hear the whole Bitch magazine staff now: “AGAIN?” [Note: I would have also linked to Andi’s awesome CNN snippet on the same topic with Rick Sanchez, but I can’t find it on YouTube! Well worth watching.]

In the previews for next week, Luke (deaf son) and Jen (African-American younger sister) look to be competing hard to get to the clue box, and at some point, Luke shoves Jen. Jen says, “Bitch.” Later, at the next clue box, Jen shoves Luke. Luke then appears to sign the word for “bitch” back at Jen. It’s not clear to me where this all ensues, due to the artful editing, but it sounds like there’s some kind of confrontation in. as Phil Keoghan, the host, intones at the end of the teaser clip”…a pit stop you won’t want to miss.” So, to sum up, Jen says she’s calling Luke a bitch because “it was a bitch move” to shove her. Luke appears to be calling Jen a bitch for calling him a bitch.

Okay, let’s go over it again! There is the use of the term “bitch” to mean “uncool” in a particularly pejorative way (see Jen’s explanation of her comment). There is “bitch” meaning “an unmanly man,” which appears to be how Luke is taking the term. And there is “bitch” meaning “mean lady,” which appears to be how Luke is using the term to refer to Jen. (There’s also the meaning of “complaining,” but I don’t think anyone is doing that here, except maybe for me.)

I do find it fascinating that the term “bitch” has moved from disempowering women to disempowering men – someone once mentioned to me that it’d be interesting if Bitch did an issue dedicated to prisoners’ rights. I don’t think that’s what Luke was talking about, though. Based on these clips, I’m thinking Jen’s statement is gender-neutral and therefore just kind of mean, but Luke’s statement was intended to be gender-specific and therefore – well, kind of a bitch move.

Whew! I was not expecting that debate to break out at minute 57 of the Amazing Race broadcast Sunday night! I’m just going to move onto the next show on my TV watching list, Groomer Has It (season 2 premiere of the dog grooming competition show!) – which is, come to think of it, involves yet another completely different type of bitch. 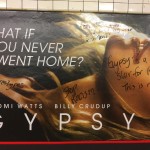