For Realz?: Mayim Bialik, Still Not a Dag | Bitch Media

For Realz?: Mayim Bialik, Still Not a Dag 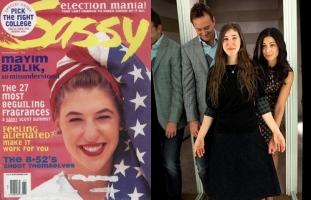 Most folks think of Mayim Bialik as TV's Blossom, but I will always think of her as the November 1992 Sassy Magazine cover girl, in an article titled "Mayim Bialik Is Not A Dag" (where she revealed that she did not go on a date with Neil Patrick Harris. Well, sure.)

After Blossom was cancelled, Bialik, who always seemed very grounded, went to (gasp) college at UCLA, and stayed through to her Ph.D. in neuropsychology, which she received last year. She's also had two children (one 3, one not quite a year old), is practicing attachment parenting, and is deepening her "Conservodox" commitment to her Jewish faith. So naturally, what's the best way for her to get back into the public eye? Ambushing her onto the show What Not To Wear to say hurtful things about the way she dresses, of course!

Really, it seems like Bialik's had a lot going on in her life lately, not the least being that it looked like her baby was not quite six months old when they filmed this episode -- it doesn't really seem right to tell a new mom who was obviously still sensitive about her baby weight that she dresses like a homeless person or to mock the sweater she wore because her grandmother loved it. Plus -- though I am not really one to talk because I dress appallingly -- she didn't actually look that bad to me. So she's got on a hoodie and a denim skirt! So what if the shirt isn't nipped in the waist at the right place? She still looked pretty cute!

All that said, it's also true that, as the What Not To Wear hosts said very kindly, Bialik as seen through her wardrobe, seems to be in a place where she doesn't seem to know what to do with herself. And sure, that seems right -- new mom of two kids, just finished her PhD but doesn't want to go into academia, trying to break back into acting (reportedly because she needs the money), that's gotta be kind of hard on anyone's sense of self-identity. Well, I hope the makeover helps Mayim figure things out and get to where she wants to go in her career, I definitely wish her the best. She's never been a dag!

.....and with that, that finishes up my two-month stint as your reality TV Bitch blogger. It's been fun! See you guys on the Bravo chatboards!

ha!! hilarious, Sassy is so early 1990s. "Dag" was a Sassyism for an uncool person. The whole point of the Sassy article about Mayim Bialik was that she was much cooler than the Blossom TV show and looked like a well-grounded person who was going to turn out pretty well in life - which turned out to be true!

Thanks for posting this!! This particular issue of Sassy was one of my favorite Sassys!

I am willing to state that a professional <a href="http://quality-papers.com">custom writing</a> service can be a good assistant on the way of sample essay composing. Therefore, all people can use it every time they want buy an essay.

I agree that this issue is ok and usually they really help people to find their style.
But I remember a poor girl when they didn't listen to her requests, what's she going to do if an acting job requires her to wear something that she can't? I'm sure in most cases it would be easy enough to adjust an outfit for her, but not every time.

Love your work, have always been, keep impressing us!
Chris Harris