For Realz?: No Cougars, Just Wild 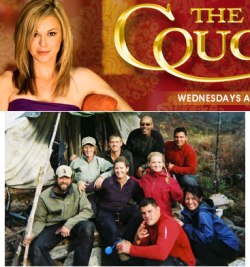 I know I should probably be writing about the latest older-lady-younger-man dating reality show the Cougar, but if you want to see an impressive 40-something woman on reality TV, I’d recommend you change the channel from Stacy the needy feline and watch Penny Jo Johnson instead.

Penny Jo, along with eight other people, is starring on the Discovery Channel’s Out Of The Wild, where they drop nine people with no backwoods experience into the Alaskan wilderness and see if they can hike their way back to civilization. A sensible, tough 47-year-old “body piercer and landlord” from Kentucky, Penny Jo is also the only one on the adventure with any real hunting experience.

In the first episode alone, Penny Jo packs up a 60-pound backpack, goes hunting, starts the fire, saves someone else’s boots from catching on fire, goes 3 days without eating (not for lack of trying, though!), and generally keeps a level head when everyone else is losing theirs. If you want to fetishize the value of “experience” in a woman like these cougar chasers keep talking about, that’s what you should be looking for, not a weirdly immature 40-year old woman who keeps cheerfully mentioning about how she feels “powerful” because a bunch of 20-something year old men are trying to feel her up (and make terrible metaphors about felines versus various male animal predators. I can’t wait until the first man on the Cougar analogizes himself to an orca.)

Spoiler alert: stop reading if this description of the show has made you so excited you’re going to run off and put it on your Tivo right now!

I’m sorry to say that at the end of the first episode, Penny Jo was sufficiently sensible to realize that, like you probably have, this is an insane idea for a reality show and bails. Dude, all they had to eat for three days between the nine of them was one mouse. (they are not very good hunters on this show.) I don’t have a good feeling about the rest of the inexperienced crew’s ability to make it through the show (though I’ve now got my eye on 36 year old school bus driver Trish to step into the “saving everyone from themselves” role) – but Penny Jo did have a good piece of advice that I think maybe Stacy the Cougar should consider as well: “You should be careful what you wish for, because you might get it – and I thought I’d gone through a lot of things before, but this was really hard.”

I really like to follow the "out of the wild's reality show"...I can hardly ignore what these guys felt when they were hungry and had only limited means. Their spirit and mind is quite strong, but because of lack of food, their bodies wanted to surrender.I can hardly wait to watch the next episode... This show is a wonderful family movie and worth watching!
Thanks a lot for the post!