For Realz?: In the Middle of the First Episode of The Fashion Show | Bitch Media

For Realz?: In the Middle of the First Episode of The Fashion Show 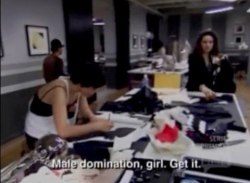 Okay, as your feminist reality TV blogger, I was so excited by this exchange on Bravo's new Project Runway ripoff The Fashion Show that I had to stop watching in the middle so I could run down and put up this post!

So for the first challenge, the designers have broken up into teams, with one team featuring (among others) the flamboyant Merlin (introduced to the show wearing a red catsuit and a red hat with a huge feather hanging from it) and recent fashion school graduate Daniella, who are clashing. (it doesn't really matter why.)

Anyhow, so Merlin, the team leader, makes a decision that Daniella isn't happy with, and Daniella objects. A fight ensues. The fight ends with Merlin storming off and saying "Male domination, girl. Get it." (the subtitled still from this fight is the graphic for this post. Wow, they've already got the episode up on YouTube!) I see this is going to be a feisty show for gender relations!

Most intriguingly, Daniella's response: she doesn't look too upset, and snaps back, "Male? Where?" While you know I don't approve of using the word female as a pejorative, I gotta say that's not a bad rejoinder. I'm keeping an eye on those two.

Okay, back to the show! Don't tell me who gets kicked off! I hope it's Merlin!

Yes because male domination is so going to help a gay man get ahead in this world. (I only assume by the fact that you called him flamboyant...which is usually code for gay.) I'm surprised he hasn't realized that our male dominated society supports a heteronormative viewpoint and is rather unfriendly to those who don't fit that.

But then again, he probably only said it to get people talking and paying more attention to him than the other contestants.

I recorded the first episode, which is good because I fell asleep during the first 10 minutes. Every contestant just seems like a pale impression of Project Runway's most interesting/outlandish characters: Guy in the samurai ponytail is Jay McCarroll-ish; guy with Japanese sock/sandal combo and crabby expression is the Asian Christian Siriano; pretty boy with highlighted bob is Daniel, etc. So I kind of wonder if the gender commentary/sniping is going to be paler and less interesting than on PR as well. Based on Merlin's knee-jerk (or just jerky) comment, I'm thinking yes.