For Realz?: The First Woman Admiral on TV? | Bitch Media

For Realz?: The First Woman Admiral on TV? 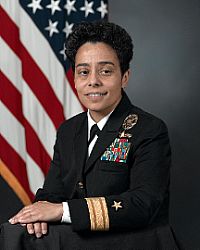 In the wake of this week’s news events, Spike TV has announced that it’s launching a reality TV show following the U.S. Navy’s anti-piracy forces near the Horn of Africa, tentatively called Pirate Hunters: USN.

Well, I hope Pirate Hunters USN will note that the current head of the U.S. Navy’s anti-piracy task force is Rear Admiral Michelle Howard (pictured at right), who in 1999 became the first African-American woman to command a US Navy ship, and in 2006, became the first woman second African-American woman and first female Naval Academy graduate to achieve the ranking of Rear Admiral.

It looks like Spike TV will have cameras on the USS Boxer, where Rear Adm. Howard is currently stationed, so I’m hoping to learn more about her if the show ever hits the air!

Quite true. Rear Admiral Grace Murray Hopper was the first female admiral. She was heavily involved in some of the abosulte earliest iterations of electronic computers. I had the distinct pleasure of attending an event sponsored by my engineering college in which she gave an address on the difficulties of early computing. She pioneered in ways most would never know about. Sadly she died very soon after her address. What an amazing woman.

Dear Captain S -- Thanks for the clarification!  This is exactly why I'm hoping this new show will give us more information about Rear Adm. Howard!  I'll change the post accordingly.  (Incidentally, who &lt;i&gt;was&lt;/i&gt; the first woman admiral, just out of curiosity?)

Admiral Howard is the real deal. I saw her speak two years ago at a conference for women service academy grads. She's smart, focused, understands leadership, and did some hard male-dominated jobs early in her Navy career--doing well through a positive attitude, humor, and hard work. She talked about the need for self-evaluation and planning in order to improve professionally and balance work and family life--specifically how she methodically planned how to spend more time with family members after years of being a workaholic. I was very impressed, and I'm an Army person. :-) I don't trust Spike to get this right, but I am sure Admiral Howard will be every bit the professional throughout the process.

Thanks for all the help on this, everyone!  I'll re-correct.  <a href="http://en.wikipedia.org/wiki/Lillian_E._Fishburne">Lillian Fishburne</a>and <a href="http://en.wikipedia.org/wiki/Grace_hopper">Grace Hopper</a> are very impressive as well. (I had absolutely no idea Rear Admiral is what you call a Commodore now either!) All this talk about the various awesome people in the Navy is getting me pretty psyched for this new show, by the way -- I hope Spike doesn't make it suck.

I can't stop admiring this example of outstanding, hardworking, dedication and honor! I can imagine how proud are all women and even more black women. Frankly speaking she has become an inspiration for me, and I think that not only for me. I hope one day a producer will turn Michelle Howard's story into an interesting movie!

<P>Sorry to prolong this, but the first female admiral in the navy was RearAdmiral Alene Duerk, Nursing Corps. She was promoted to adminral in 1972.</P>

Just for history: The first woman with the rank of admiral was a heroine from the Greek War of Independence (1821), Laskarina Bouboulina. http://en.wikipedia.org/wiki/Laskarina_Bouboulina
The rank was awarded posthumously by the Russian Navy, however Bouboulina was a de facto admiral in command of war ships that belonged to her.