For Realz?: This Week In Reality TV Catfights | Bitch Media

For Realz?: This Week In Reality TV Catfights

Hello! I’m the new reality TV blogger for Bitch! Please be warned in advance, these posts won’t be terribly deep. Also, there are some spoilers.

Just me, or has this week on reality TV just basically been women arguing with each other? A terrible affront to feminists everywhere, or the very reason why reality TV was invented in the first place???? We’re ranking ‘em (on a scale of 1 to 5 doorslams), here! 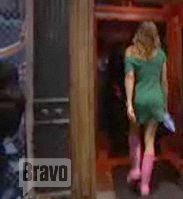 –The Real Housewives of NYC: This show is basically an exploration of the mathematical question, “If you have five self-centered TV subjects, how many different fights can they get into?” (The answer, incidentally, is 32). This week, Ramona’s husband Mario calls Jill self-centered, Alex and Ramona accuse each other of sluttiness, and, in the fight they’ve been promoting all season, Kelly and Bethenny have at it at the Brass Monkey. I’m giving this fight three doorslams: I have to reluctantly admit that every single person had at least one good point in their confrontations, but the fights were too petty to really enjoy. This would ordinarily get two doorslams, but I liked Kelly’s pink knee-high galoshes enough to give them one more.

–America’s Next Top Model: Now, here’s a good fight! After squinchy-eyed Celia tattled to Tyra at panel that burn victim Tahlia felt ambivalent about being on the show, World War III breaks out in the models’ apartment. The uncomfortably racialized atmosphere of the fight (minority models against Caucasians) was somewhat leavened by the complete inanity of the argument (starting at around minute 1:00 in clip above), the highlight of which was Aminat shrieking at Natalie: “You. Are. STUPID. S! T! U! P! I! D! (3:45-4:17). Take a note, Real Housewife Kelly, that is how you should’ve played it with Bethenny at the Brass Monkey. Even more satisfyingly, Celia gets served at judging panel, with Tyra telling Celia that she’s been the victim of female-on-female sabotage before and she will not put up with that on her show. (5:30-6:35 in clip). I don’t usually say this, but GO TYRA. I love it when the moral is “women have to back up women!!” Five doorslams!!

–Pretty Wicked: Ugh. Pretty Wicked is a new reality show with the premise of humiliating overly confident women. Well, they call it “teaching narcissistic girls to become beautiful inside,” and there’s certainly plenty of fighting, but the “simmer down, sweetie” message of the show is making me awfully uncomfortable and I’m not going to watch it anymore. Negative three doorslams.

–And Project Runway. Here’s some real-life reality TV conflict for you – the lawsuit between Bravo network president Lauren Zalaznick and Lifetime network president Andrea Wong over who gets to air Project Runway was resolved, quote unquote “amicably,” with Lifetime agreeing to pay Bravo’s overlords at NBC an undisclosed amount of money to take over the show. The moral here: women, if you’re going to fight over reality TV, be the president of the network. No doorslams – just a handshake will do!

I'm not sure if this is the right venue to admit this, but here goes. I watched The Girls Next Door and I actually enjoyed it. And it hit me one day why: the girls never fought. Usually on reality TV the sole purpose of shooting a show around numerous women living in close quarters (ok, a mansion) and competing for something (a man, a job) is to showcase the competition and cattiness of women. But here we saw three women who genuinely seemed to be friends. They didn't beat each other up, throw drinks in each others faces or any of the other horrible behavior we're used to. When they had arguments it was more like "real" women may have with a sister or friend. Now as for that old man who wears a bathrobe all day and collects blondes like toys and gives grown women a 9 pm curfew.....That's a whole other thing.

I watched the show too, and I don't think the women were the best of friends, and they admittedly did express to the camera in their solo time how much so-and-so were getting on their nerves, but the women on the Girls Next Door were mature and very sure of themselves. They weren't so unconfident that they felt they had to put others down (Kendra admitted that she had really bad acne but that didn't send her into a hating and bitching spree). I just think that Playboy has really high standards for how their employees act (which they pretty much were), and if there was even some yelling, I don't think they'd be with Playboy much longer. Playboy has an image that they want to uphold of gorgeous, classy women. And classy women don't fight (well classy people in general don't fight).

Anyways, regarding the catfights on national TV, I can't help but feel sorry for these people. Some are just always looking for a fight, and they have such low self-esteem that they feel they have to pick on others (men are not exempt from this). I think there should be more shows about confident people who feel good about themselves. Also, most reality competition shows deliberately cast people who have emotional or mental issues regarding narcissism, low self-esteem, sociopathy, etc, for ratings.

I second the notion that Girls Next Door is watchable because the girls are surprisingly nice and real. I also second the feeling that its feels wrong to admit that, given that there is so much about the show that makes it unwatchable (i.e., Hugh Heffner's strange obsession with young blond women and his sometimes paternal, sometimes sexual behavior toward them).
I also agree with the idea that they behave themselves because they are effectively Playboy employees, with the addition that this is a novelty for reality TV. TV generally seems to love the idea that anywhere women gather they will be compelled by their nature to become overly emotionally connected best friends. Reality shows like the ones mentioned in the blog seem to love the idea that when more than 2 women gather in one place their periods sync up and they become a mutually dependent hive mind ready to implode at any moment. If Girls Next Door is technically a workplace show, I really can't think of another that focuses on a group of women who are noncompetitive and basically nice to one another.

What about the "Bad Girls Club"???? How could you not say anything about that monstrosity? The premise is that they get a handful of girls with borderline personality disorders and major anger management issues, they stick them in a house (more about the sex toy machine on the first floor later), and then they give them unlimited amounts of alcohol and let them kick the shit out of each other and anyone else unlucky enough to be around, usally while wearing very little. I might add that this show is on Oxygen, "The Network for Women." I have yet to figure out how the producers of this show figure in any way that this is a show designed for anything other than a male audience. I am also mystified as to how the "bad girls" are supposed to come out at the end of the experience having changed their ways. I am pretty sure that alcohol, random drunken sex, and violence are not APA approved treatment methods. The reunion show this week, hosted by Perez Hilton, was more of the same. Perez actually explicitly encouraged them to fight, getting up and moving out of their way at one time so that they could pummel each other. I have to say, at least he didn't pretend that they were all there for anything else other than gratiution exploitation. I am not sure if doorslams are bad or bad as in good, so I'm just gonna go with three restraining orders and a hair pull for this show.