For Realz?: Why Do I Always Root For Females? | Bitch Media

For Realz?: Why Do I Always Root For Females? 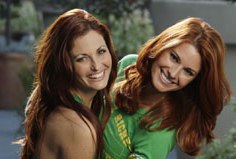 Okay, I didn't like Cara and Jaime very much either, what with all the ugly American behavior all season, but why can't an all-female team win the Amazing Race? It's frustrating!

Of course, it's not particularly helpful to feminism to reduce it all to "girls rule boys drool," particularly when it comes to tallying reality TV contests winners by gender -- but still! Why is it so hard for women to win these shows? It's gotten so the only show where I can consistently see women winning is America's Next Top Model. I was rooting for Stephanie to become the first female Top Chef two seasons ago, and I was pretty pleased for Project Runway had the all-female final runway show. I'm pulling for Shawn Johnson on Dancing with the Stars too!

What is it about reality TV contests that make it break down into a gendered thing anyways? For goodness sake, I'm watching Leader of the Pack, a show on HGTV where a family is picking a dog, for crying out loud -- and this last episode featured the 7 year old only daughter in a three-child family weeping disconsolately to her mother that she didn't want the family to eliminate Annie the white Maltese mix "because she's the only girl left."

And why do I always fall for this? Now I'm totally rooting for Annie, even though the boy dog Piper seems like a much better dog for the family, and I don't actually even like Annie. And I didn't even like Cara and Jaime! Is it always going to be a gender war on reality TV?

I just have to LOL about the fact that someone other than me watched leader of the pack! And I noticed when the girl made that comment too... did you also notice that one of the kids said that Annie always gets picked on because she is a girl?

Just proves that gender socialization (positive or negative) is always happening, whether we want it to or not!

And PS- I was totally rooting for Lil Kim... too bad she got eliminated :(

I totally agree. I recently started watching previous seasons of The Amazing Race on YouTube (I don't have TV so I take what I can get when I need my TV fix) and was so happy when Chip and Reichen won and even more happy when TK and Rachel won b/c they were just really great people. it also makes you (as the viewer) happy that sometimes marginalized people DO come out on top, esp when the people they're competing against are just wretched! But then my happiness is always dashed when assholes win, like that really racist model couple in season 6 and the a-little-too-close-for-comfort duplicitous brother/sister team in season 13.

That's my long-winded way of saying, yeah, I wish an all-female team would win. I think it just reinforces this idea that women/girls are weak when they consistently lose out to male or co-ed teams.

Being a big Amazing Race fan, I've also watched the Asian version, and they had an all girl team win the first season out. Not sure why it hasn't happened yet with the original.