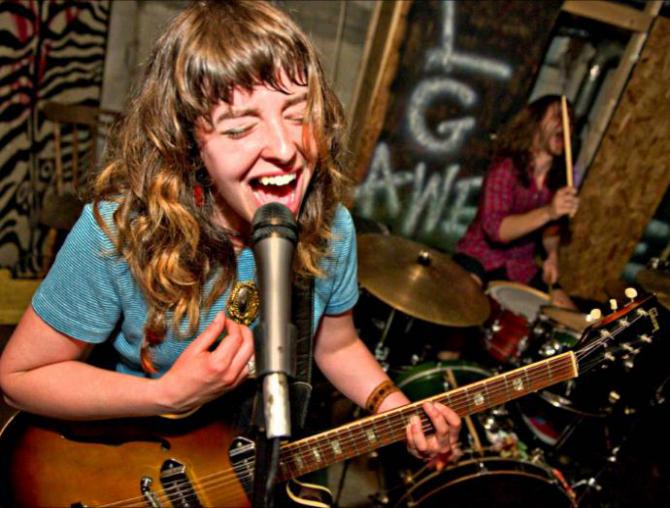 Hop Along wasn’t a band I was ready for—every track on their latest album, Painted Shut, gutted me. At first listen, the songs from this Philly four-piece sound like rallying anthems. A lot of that sound is thanks to vocalist and guitarist Frances Quinlan. In each tightly syncopated track, Quinlan’s voice—at times a powerful rasp, in the same stanza a hopeful, soaring sound—was captivating in a way I hadn’t heard since I can’t remember when.

But once you dig deeper—as I did, as much as you can “wear out” an mp3—you realize they’re not so much anthems as stories. Quinlan’s songs are about hard-won gains, bittersweet victories, and making peace with terrible situations. Take the deceptively upbeat single “Powerful Man,” where Quinlan recounts the day she witnessed a father beat his son in broad daylight. Quinlan was 18 at the time, and in under four minutes the song captures a fractured matrix of power and responsibility.

On other tracks, she weaves memories, history, and literature together into a story that may start out desperate and urgent but always ends in redemption. Good luck putting the record on as background music—each song is wretched and beautiful, the band’s instrumentation as exacting as Quinlan’s words, which wash over you right before they jolt you awake again.

There’s a political undercurrent running throughout her music—the album was partially influenced by the oft-forgotten and troubled musicians Buddy Bolden and Jackson C. Frank. Quinlan has an eye out for the underdog: In a Paste interview she amends her love of The Grapes of Wrath with an anecdote on Dust Bowl journalist Sanora Babb, whose nonfiction was overshadowed by Steinbeck's success. And she gave an uber-feminist take on stagediving and punk-show etiquette in Noisey.

I was so lucky to speak with Quinlan from the road and see her perform in Portland. Below, she talks about songwriting, the modern political song, her influences (which run from Flannery O’Connor to Joni Mitchell), and what inspired her to stick with guitar as a teenager.

I think we’ve grown used to songs about love and relationships. But Hop Along’s songs are specifically about power—imbalances in power, lack of power, people who have more power than they think they do. Can you talk about that more?

I don’t want to say someone can’t write a love song if they want to, or can’t write about heartache, but songs speak differently to me and my level of experience. I look for other things to talk about in songs besides the “insert lyrics here” approach.

I’m more disappointed when bands don’t even think about the power of words. I think a song can be political without being overt. There are political Neil Young songs but they’re not talking about any one event in particular. I think the most important thing is being in touch—in touch with what’s going on around us, and writing with compassion and awareness. I mean, didn’t Prince write a song about Baltimore?

I get tired of those “We Can Do It” songs that you hear on the radio. It sounds mean spirited, but it’s like, “Yeah you can do it, you’re rich.” I keep thinking of when Bob Dylan said “All my songs are protest songs.” I don’t know. I think there’s something to that. He wrote aware of hypocrisy and unfairness that we’re living in.

Yeah, these days that kind of lip service isn’t really enough. We need something that can speak to reality.

You’ve talked a lot about “Powerful Man,” which recounts the day that you, as an 18-year-old, passed by a man beating his young son. You’ve talked about how you felt conflicted writing it—if you were doing the right thing, even now.

A lot of these songs were hard to write. One thing is that I didn’t want to make “Powerful Man” about me. The awful thing happens to that kid—he’s the one getting beat up. I just saw it, I was just there.

There’s part of me that thinks, is anyone going to care if I yell at this man? He wasn’t kidnapping him, he was just beating him. There is something about parents hitting their kids, it’s just such a weird thing that we allow. Like… it’s not our business and people are being abused. The craziest thing was he saw us, looked us in the face, and had no reaction. It just didn’t register that we were any threat. And then he said “She’s not gonna help you.” He felt nothing that we were there. It in no way affected his behavior.

And then there’s also this theme of adulthood and childhood. In his eyes, to any little kid, anyone who’s older than 16 is a grown up, that’s what my memory is like. But also you hit 18 and suddenly you’re no longer a child. [The song] is a poor apology from me to him.

You’ve said the album is influenced by Bob Dylan’s Highway 61 Revisited. What were some non-musical songwriting inspirations for Painted Shut?

I was watching a movie last summer and that immediately became a song. Hud, a Paul Newman movie. He’s this really self-serving person, and it made me think of our issues with excess today, how certain people talk about climate change saying it’s “not going to happen in their lifetime” so it’s not their problem. So that became a lyric [in “Texas Funeral”], people have interpreted that lyric in other ways, but I wrote it about that, the incredible sin of not caring about anyone else’s future.

A lot of my writing comes from reading. I love Grapes of Wrath, Flannery O’Connor, Italo Calvino, I got drawn into poetry recently. I just love to read.

Writing is always a little different for me. I take so long to write something, it can take years to flesh something out. Some of these songs have existed for a long time but then they’ve changed over time. Or I had to let lyrics go because of song arrangements. That’s a big challenge—trying to write a story to a song. It can’t just sit on the page as is.

What’s one heartening thing and one troubling thing you see happening right now in the music industry?

I think women artists are getting a lot of attention, but it’s attention they should have gotten a while ago. Women are feeling more encouraged to play their own instruments and play their own songs. I would say that we’re finally dealing with body image in a realistic and positive way. Like, the pictures in Guitar World are pretty troubling—half-naked women posting with equipment. But more people are seeing the ridiculousness of that now. Everyone has the capacity to do something brilliant, and I’m seeing people begin to wake up to that.

One troubling thing to me is that people are getting more and more insular. We’re not talking about our shared experience as much as we should. Sometimes I worry about that—you talk trash on Facebook, and we make these worlds that could be so big, so small. I mean, Twitter was used in Egypt as a vehicle for protest, and it worked, that’s amazing. But it’s also used to demonize people and for gossip.

Now you can share your thoughts easily, you can tell the world about your day in second. That can be an asset but it can make your life and world very insular. I think we’re becoming selfish in ways we don’t even realize, myself included. Like, now we can obsess over what people think of you in a way that wasn’t a concern before. And I think we miss a lot of things, we miss bigger things that are going on.

Who are you listening to right now?

I think the new Alabama Shakes record, Sound and Color, is amazing. There’s a really great band in Philly right now, Sheer Mag—they’re terrific. There are a lot of women I know who have been making music for a long time but are finally now getting more recognition, like Waxahatchee. At the same time I’m always listening to older records: I listen to Joni Mitchell all the time, the Breeders, Karen Dalton. It seems like people are embracing character in voices again. It’s not this reverberant ghost voice, it’s people with weird voices—I mean that in a positive way!

When did you first start playing guitar?

I begged my dad for an electric guitar when I was 13, and he got me one for Christmas. But then I decided it was too hard, and didn’t touch it for three years. But my older brother got me into female artists: Lauryn Hill on cassette, Patti Griffin, Ani DeFranco, just a bunch of women artists playing their own instruments and making their own music. So when I was 16, I tried again and it was hard, but I eventually got it.

I picked up the bass guitar in high school because I thought the guitar was “too hard.”

And it is hard—but when you finally get it it’s like magic. You have to get over the first couple months of hating it. I was very lucky to have encouraging people around me. My mom was extremely encouraging, always telling me that I can make it myself. She gave me a Cat Stevens CD and said “I think you’ll like this.” There weren’t too many people telling me I couldn’t do it.

That’s so important. What can people do on their own to stick with their craft?

I think it’s important to listen and to read as many things as you can. I think we think things have to be done a certain “right” way, and that couldn’t be less true when it comes to art and music. I think so many people think they need to be as good as somebody else when they start—I mean, I did—but it’s impossible. You need to remember that it takes time to get good and you need to take to time to learn. We just have so much capacity to learn. The first song I learned on guitar was “She Don’t Use Jelly” by the Flaming Lips. It’s a very simple song, it’s as simple as you need to make it.

Write a song that has two strings in it. Write a song that you can play. I mean listen to to Daniel Johnston! His songs are so simple—they’re out of key, but they’re great. I heard when Radiohead started their demos were just awful. I think people assume that success is 90 percent raw talent and that’s simply not true.

I mean, I get so starstruck when I listen to records and read books that I love, I romanticize it, but I never think about what actually went into it, I don’t think of people sitting at desks. I think we’re taught to romanticize art, but there’s nothing more unglamorous than the life of a writer. It’s lonely and tedious and boring. It takes practice. I hate practicing but my band makes me do it [laughs] and it’s why we’re able to do any of this at all.

Kjerstin Johnson is the editor in chief of Bitch magazine.

Relevant: BitchTapes: Punk's Not Dead, It Just Got Better 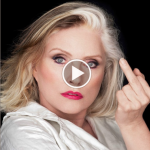 by Annalise Domenighini
Punk has been alive and well for decades, and this playlist is chock-full of delightful songs.