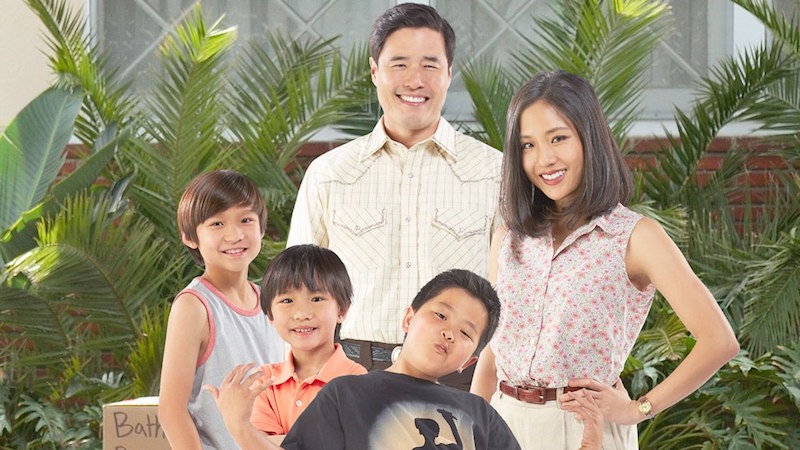 The cast of Fresh Off The Boat (Photo credit: ABC)

Last night’s premiere of Fresh Off the Boat was a relief.  Since the ABC sitcom based on chef Eddie Huang’s memoir was announced last year, many people have closely followed its development. For many Asian Americans, our anticipation stems from growing up in front of the television and not having our faces reflected back at us. I have vivid memories of jumping off the couch when I saw an Asian person appear on screen and hollering for my entire family to come look. Sometimes if you didn’t turn your head fast enough, you’d miss seeing the character entirely.

Even before a single episode of Fresh Off The Boat aired, the show courted controversy from some who found the show’s name offensive and Huang’s own admission that he had momentarily regretted selling his story because it was watered down into a neatly packaged sitcom for a majority white audience. And just last week, ABC tweeted and quickly removed an offensive promo ad for the show.

All of this scrutiny felt necessary, not just because of the immense lack of representation of Asians in mainstream outlets, but also due to the marginalization of the immigrant experience in the ongoing narrative of what it means to be an “American.”

Will this 22-minute sitcom get it right? Will we find a show’s premise relatable? Will we see ourselves in a story about a hip-hop loving, Taiwanese American kid and his immigrant parents who move from the familiar community of Washington, D.C.’s Chinatown to suburban Orlando, Florida where they are seemingly the only Asian family in the neighborhood? Will it be funny? Will it be watchable? 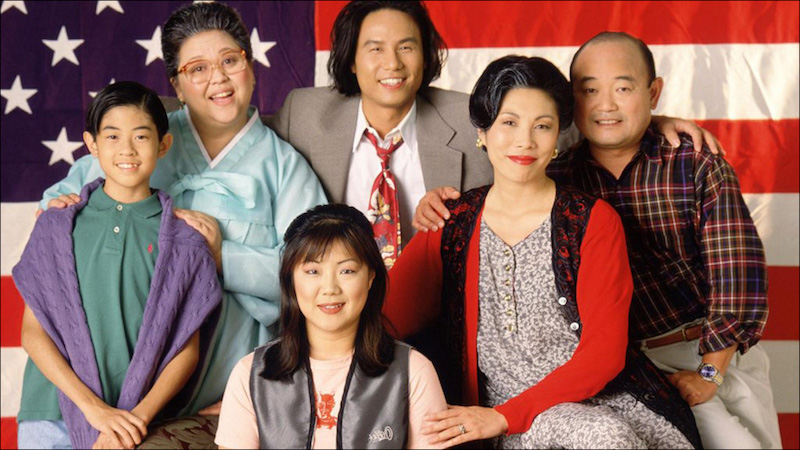 Critics and Asian American audiences alike asked many these same types of questions 20 years ago. In the write-ups about Fresh Off The Boat, there is always mention of the first Asian family to claim a sitcom slot: Margaret Cho’s All- American Girl premiered on the same network in 1994. The show was critically panned and quickly faced harsh judgment from some outspoken members of the Asian American community. (In an interesting twist, one of critics was writer Jeff Yang, who said Cho looked “like a P.O.W. who’s been tranqualized and forced to recite propaganda by her captors.” He’s now the father of Hudson Yang, who stars in FOTB as young Eddie Huang.) Even with all of the criticisms, it was historical in putting Asian faces on television at a time when even seeing Asians with speaking roles was a rarity. We can’t talk about Fresh Off the Boat without looking back at All-American Girl to see what’s changed about our culture—and what unsurprisingly has remained the same.

Margaret Cho broke into the industry through the popularity of her stand-up; she had unique and hilarious perspectives about growing up with Korean immigrant parents in the melting pot of San Francisco. She was considered groundbreaking for her openness in addressing race, gender, and sexuality. American audiences had not seen a comedian like her on television before. I watched All-American Girl when it aired live for a single season beginning in 1994 and remember savoring the novelty of seeing so many Asian people on-screen. But my connection to the show ended there because the storyline and characters on All-American Girl felt like odd two-dimensional ideas of what assimilated Asian Americans should look like. The show mostly focused on a fictional Margaret Kim and her random dating life while balancing stereotypical expectations from her Korean parents. This didn’t mirror the realities of my working-class upbringing and my refugee immigrant parents. It’s sad that the sitcom didn’t embody the edgy spirit of her act, even though it claims to be based Cho’s stand-up act. As the final credits of the show roll, there’s a line saying “Based on the stand-up comedy of Margaret Cho”… but, tellingly, in the DVD commentary of the season, Cho scoffs when the line appears on the screen (she’s refuted the claim in print, saying that the sitcom bore almost no resemblance to her comedy). 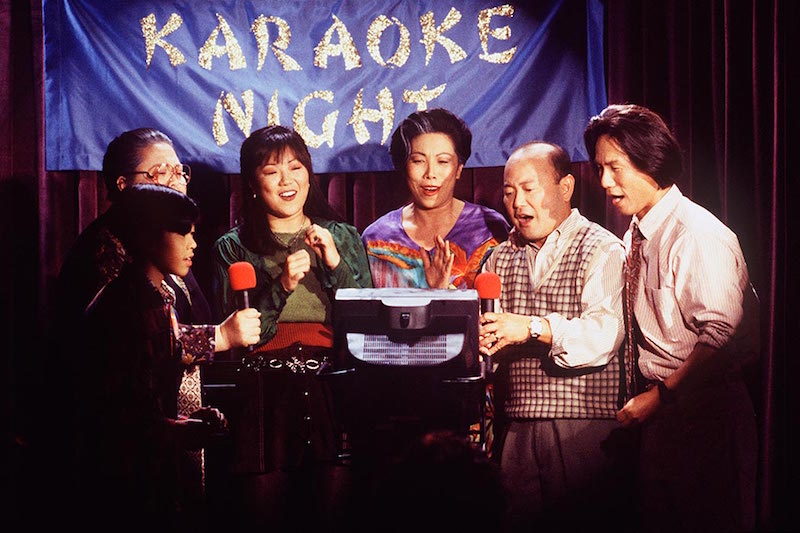 Recently, I re-watched the entire season of All-American Girl, and found that my nostalgia has forgiven the show for its shortcomings. The show wasn’t great—with its unfocused storylines and flat jokes—but were shows like Growing Pains and Step By Step that much better? Family sitcoms of the 90s were all cheesy and “character development” was limited to having an annoying catchphrase. But shows like Full House and Home Improvement, which were overwhelmingly white and middle-class, didn’t have to deal with the pressure of having to represent an entire population of people. All-American Girl faced scrutiny for issues that would be unimaginable for other shows. There were questions about the appropriateness of accents and whether it was suitable to cast non-Korean Asian actors to play Cho’s family.  Margaret Cho herself faced an extra set of challenges as a young woman in the entertainment industry. Before the show filmed, she was told she needed to lose a lot of weight in a short timespan. On a commentary track of the show’s DVD collection, she admitted that the drastic weight loss left her feeling famished and unable to concentrate during tapings. She recounts a moment in her on-set trailer where she urinated blood as her body broke down. Cho not only sacrificed her personal voice for the show, but she also put herself on the line physically.

Ultimately, Cho’s show didn’t work because it wasn’t really about Margaret Cho. It was about what TV executives wanted Margaret Cho to be. But the show offered us a glimpse of what could be possible. Where All-American Girl wasn’t able to find its footing, it looks as though Fresh Off The Boat has already been able to build off the foundation that Cho’s show built. 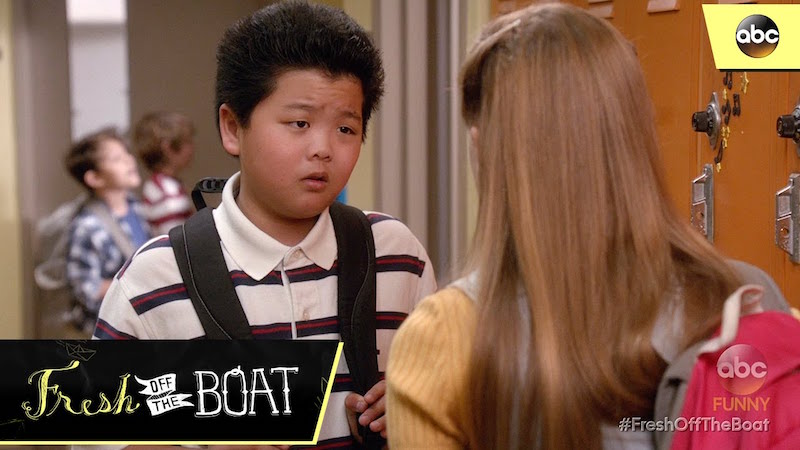 Just the titles of the two shows say a lot about the current representation of Asian Americans.  The “All-American” idea reinforced the model minority myth of the good Asian immigrants who have arrived onto the shores of the United States to excel in math and serve chop suey while quietly going about their lives. Rather than highlighting the immigrant experience, All-American Girl’s title shot focused on red, white, and blue ribbons unfolding. The shot effectively told its viewers, “Hey, ya’ll, we know you’re about to see a whole cast of Asian folks, but don’t worry, they all speak English and won’t be too ethnic-y.”

Contrast this with Eddie Huang fighting for the title of his memoir to remain the name of the show. While some feel that the term “fresh off the boat” is a pejorative phrase used to dismiss recent immigrants, many of us who were raised by FOB parents have embraced it as a term of endearment that acknowledges the deep sacrifices they’ve made to raise us here. Calling the show Fresh Off The Boat immediately feels like its speaking to Asian viewers and centering our stories. In the first episode, I found an unexpected satisfaction in seeing the Huang family frequently point out the myriad odd behaviors and preferences of white people. Jessica, Eddie’s mom, doesn’t quite understand the gaggle of white moms who roller blade together, how white parents could be satisfied with their kids getting straight-Cs in school, or the sterility of a suburban big box grocery store. Jessica and Eddie go to the market because he’s pleaded to have her buy him “white people food” to bring for lunch at school. Even hearing a family say “white people” over and over again is a refreshing departure from most TV.

It was glaring in All-American Girl how Cho’s character repeatedly referred to white characters  (and herself) as “American,” as if calling someone white was disparaging. Fresh Off The Boat’s unabashed othering of a white culture that has been deemed the normative felt so real coming from this immigrant family. Maybe it’s too real? A New York Post review of the pilot episode remarked that jokes about the “predictable weirdness of all white people” felt trite and “the show’s view of Caucasians is certainly not going to entice anyone to stick around for Episode 2.” I appreciate that Fresh Off The Boat isn’t made for a white television reviewer who threatens that “Caucasians” may not follow the show.

The first two episodes of the show make clear that the Huangs don’t feel concerned with assimilating by leaving their ethnicities behind. Fresh Off The Boat feels promising with its 90s nostalgia, hip-hop references, and even the takes on cringey Asian stereotypes of Tiger parenting didn’t feel hackneyed to me. The strength of Fresh Off The Boat is that it’s centered around the real lived experiences of an immigrant family. Lets hope that the rest of this inaugural season will keep telling their stories with the same swag and flair like that of young Eddie’s strut.

i watched the first two episodes and loved them both. the characters are real people with their own individual and family idiosyncrasies, and i haven't laughed that much watching a sitcom in a long time.

i didn't read the original ny post article, but this: "jokes about the 'predictable weirdness of all white people' felt trite"

OH REALLY. buck up, buddy. this is why people don't like jokes written by (overwhelmingly) white writers in all media about the predictable weirdness of [insert minority].

even though the 'fresh off the boat' family isn't mine (or even the real eddie huang's) exactly, i love that it doesn't mind making white people feel like the other.

i was happy about the idea of this program but concerned to see a child of African American heritage treated badly. This child was already friendless and the protagonist kicked him and threw pudding at him. This is not humour. What is the subtext here- that it is okay to treat African Americans badly to get ahead in America?

Let's not forget that he called Eddie a "ch**k" after shoving him out of the way and telling him that he was on the bottom rung of the social ladder now. Lateral oppression at its finest. The message here is that oppression is toxic, and no one is free of it. Eddie fought back for being insulted by someone who he did nothing to harm, other than wanting to sit with the people who pretended to want to socialize with him (the racist white kids who thought his food smelled bad)