“Fresh Off the Boat” Takes on Sexual Harrassment and Consent 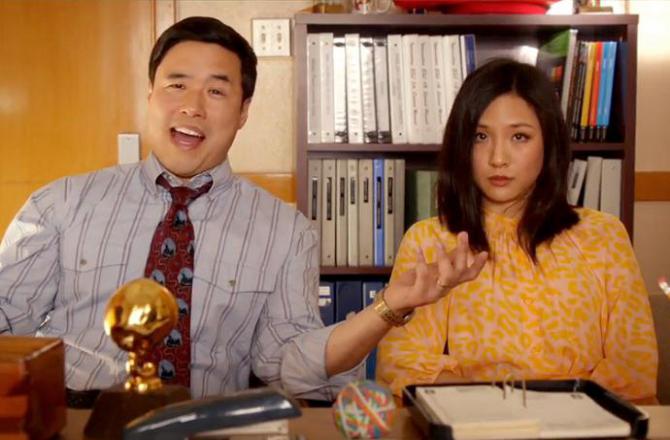 When was the last time you saw date rape discussed during a primetime sitcom? New ABC sitcom Fresh Off the Boat tackled the issue last Tuesday, February 17th, in a scene where the show’s mom expresses concerns about date rape and makes an effort to ensure that her son doesn't grow up to be a rapist.

Fresh Off the Boat is based on the memoir by Eddie Huang growing up as the kid of Taiwanese immigrants in suburban Florida. The fictional Eddie (Hudson Yang) grapples with identity, music, and being a the only Asian kid at school while his parents Jessica (Constance Wu) and Louis (Randall Park) face their own struggles with suburban life and trying to run a steakhouse.  To be clear—date rape is not the focus of the episode, “Persistent Romeo,” that aired last week. Instead, the episode focuses on Eddie's continued efforts to fit in with the boys at his predominantly white middle school. The boys are having a sleepover and, being adolescent boys, are excited about the prospect of looking through the “dirty magazine” of one of the hosting boy's older brother. The “dirty magazine” that has them all excited is the swimsuit issue of a 1995 Sports Illustrated. Eddie changes the sleepover to his house with promises of a dirty movie. Of course, Eddie doesn't actually have a dirty movie, but when they arrive one of the boys mistakes an instructional videotape about sexual harassment for an X-rated movie.

The video spawns an epidemic of sexual harassment at the school with the boys doing their best to imitate all the examples that the video warned them against. Their attempts are more ridiculous than creepy. Most of the girls having absolutely no idea what the boys are talking about and, it's made clear in one instance, the boys don't really understand either. But the rampant, poorly done dirty-talk does make the school principal realize that his students know nothing about sex. He calls in the parents, including Eddie's, to ask that they talk to their children about sex. To help with the talk, he gives them a textbook that uses flowers and watering cans as confusing metaphors.

Sexual harassment is certainly on Jessica’s mind because, not having a social life in Florida, she spends every night watching the local news. Each headline is cause for concern. One night, the headline reads: “Are you at risk for date rape?” Cut to the next night, wear we see Jessica once again sitting on the couch watching the news. But this time she's wearing a “No Means No” shirt. 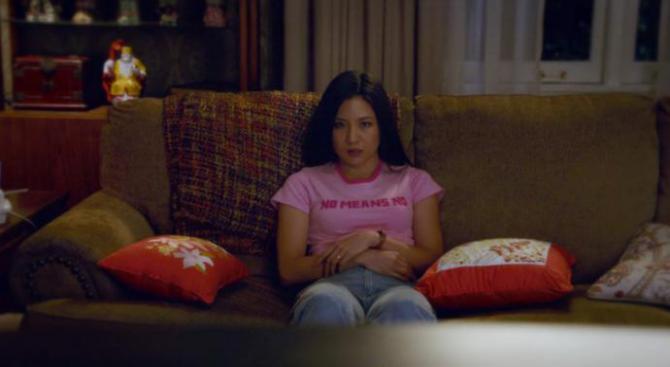 The point isn't picked up again until the end of the episode after her husband tells her that his sex talk with Eddie went well. “Did you tell him not to date rape?” she asks. When the answer is no, she takes matters into her own hands. She pounces on her son, hitting him with a gigantic stuffed animal bunny. “You like that?!” she shouts. “No! Well girls don't either! No means no! Respect girls!”

The scene is comic and it struck me for two reasons. First, I'm amazed that a primetime family sitcom is addressing date rape at all. Sure, a family sitcom will inevitably have an episode in which the parents have to talk to their kids about sex, complete with all sorts of uncomfortable, laugh-inducing situations and blunders. But how many of these situations do you recall that included a more serious message about date rape and consent? Or any message about date rape and consent?

Second, if we saw more parents in pop culture actually telling their sons not to date rape, we'd start to broaden what we think of when we think of sex to include ideas about consent. For kids watching the show, it would mean instilling in them at an early age (and in a non-preachy way) that they need to take “no” seriously. For parents, it would remind us that we need to include consent, respect and boundaries when we talk to our kids about relationships and sex. If consent and respecting the word “no” were considered just as important as how to put on a condom or whether a girl should go on birth control, perhaps we would not be at the point where we are outraged and shaking our heads at the constant stream of high school and college rape scandals hitting the headlines.

Jessica’s “don’t rape” talk isn’t perfect. But heck, if more mamas pretended to smother their sons with stuffed bunnies while shouting “No means no!” and “Respect women!” we'd probably still see many fewer boys growing into men thinking that it's acceptable to rape. While it probably wasn't the intent, Fresh Off the Boat shows that issues of consent, boundaries, and date rape can and should be included when we talk about sex to the kids in our lives.

These were my thoughts exactly while watching. I immediately wanted to share this video and I couldn't even find a clip of the scene! Thanks for putting this into words!