This morning’s Entertainment Weekly PopWatch blog featured a “Made Us Think” comment that provides us a choice topic for discussion over here at Bitch; particularly considering our recent discussions about women directors.

“Today’s Made Us Think comment comes from “Elly,” who writes in response to Missy Schwartz’s interview with Jane Campion,

I suspect a large reason there are so few well-known female filmmakers may be that so many female writers, directors etc. are too focused on the lack of “just for women” entertainment, and so tend to turn out stuff with distinct agendas for distinct female audiences — i.e. the ‘empowerment’ Campion spoke of — instead of just focusing on making a good product. I see it all the time in books – I rarely read sci-fi or fantasy by female authors, because the story is usually just there as a weak afterthought to help move the rant along, the real point of the book being to obsess over what patriarchal pigs men can be. Case in point: Margaret Atwood.

That’s one theory, and it certainly got us thinking. What about you?”

As to be expected, responses in the comments section ranged from ignorant to sound:

“I don’t see much women empowerment in the Harry Potter books. I thought both genders were portrayed well without isolating one group or the other.”

Right, because empowerment, self-confidence, agency, and independence are isolating; and the lack of these qualities should produce something that is successful with the masses. Sigh.

“I would argue that women are only allowed to make movies when they have a clear cut “women’s” agenda. A studio is not going to allow a woman to direct something they want men to go see for fear that they will girl the movie up. There are mainstream movies that have been directed by women, but nobody ever expected the films to be mainstream.”

Girl the movie up?!?!? Allowed to make movies?!? A women’s agenda!?!? This comment touches on every excuse the Powers That Be in Hollywood use as to why we don’t see more women making film/starring in film: women as an entire sex/gender have agendas/tastes that won’t resonate with men; movies made by and for men will naturally appeal to women; women destroy the projects they are allowed to direct, but when they are allowed no one expects them to succeed anyway because they are just girls.

Fortunately, there were also some surprisingly sound comments as well:

“One thing I’m noticing with women directors is that there’s very little hype when one of their films comes out. The Hurt Locker was the first Kathryn Bigelow film that I’ve seen receive any real attention from the media. Mimi Leder directed a few large budget films like “The Peacemaker” and little was made of that. Darnell Martin directed “Cadillac Records” last year. Kasi Lemmons has made some good films like “Talk to Me.” None of these directors make movies that are like what Elly described but most haven’t done all that well at the box office, whether or not they deserved it. It’s too easy for the usually narrow-minded powers that be in Hollywood to blame that on the directors’ gender. If we want more women directors we’re going to have to start seeing their films when they do come out.”

Agreed. And since there is such little hype for movies directed by women (except, it seems, for Jennifer’s Body) I recommend signing up for the blogs Women and Hollywood and XX Cinema – both will let you know what’s coming out and when so that we can go and support movies made by women.

“I think that theory is full of crap. First of all, THE HANDMAID’S TALE is a good book that has sold a ton of copies — a ‘message’ doesn’t necessarily get in the way of entertainment. Second, there are many women who create mainstream entertainment and are successful, so it’s not some systemic thing. But I think there is still a big belief (more on the part of marketers than the public) that movies about women are “for women” and movies for men are “for all audiences”! If women write/direct about their own lives, they are seen as pandering to a niche market; if guys write/direct about their own lives, people are more likely to take it seriously whether the project deserves it or not… .”

Hear. Hear. So, besides speaking with our wallets, what can we do to combat these preconceived notions about audiences? Discuss away!

By the way, this is my last official post as the Grrrl on Film. I want to thank Bitch, and especially Kelsey and Andi for the opportunity to be a guest blogger. I also want to thank everyone who commented, sent me lovely email, and signed up for announcements about my forthcoming book, Ink-Stained Amazons and Cinematic Warriors: Superwomen in Modern Mythology. I hope you’ll follow me over at my blog – and if you do, I promise to be better about updating it! I also plan to attend and/or speak in 2010 at WonderCon, Emerald City Comic Con,The Slayage Conference on the Whedonverses (yes, I AM a Buffy Scholar and Critic!) and San Diego Comic Con International where I hope to be promoting my book, as well another that I’ve contributed a chapter to (it’s an anthology of essays on the Batman television show from the 1960s - I talk about the women, natch!). So be sure to say “Hi!”

Great entry! Thanks for your time spent here at Bitch.

i hate that you can't purchase from their film catalogue. there's so many films i would order.

I love so many of the posts written by the women at Bitch Magazine. Whether it is pointing out trolls and douchebags, or giving us open minded feminist viewpoints unafraid of sexually diverse subjects, Bitch is great. I love your advocacy for the development of female super-heros whether real life or comic characters. Hope maybe you will still post here somehow once in a while even if it isn't the Girrl on Film series?

There are many reasons films made by women don't do well in terms of the movie industry goals of making tons of money and earning enough "critical acclaim" to fill a trophy case: Sexism in film schools, sexism in the film industry as a whole, the desire to display femininity in flat, two-dimensional characterizations rather than creating spectrums of its portrayals, and the ability to raise capital for truly worthy projects being just a few. Filmmakers that strive to tell stories or change people in positive ways - female AND male - often lose funding to those intent on following the Hollywood formula for success [murder/rape/kidnapping + hypermasculine protagonist = more muder/rape/money for the studio]. Another huge reason female filmmakers don't fare well commercially is because when they do get projects greenlit for production, people don't go to watch the films in theaters and don't buy them when they come out.

Example: I am involved with a youth group for LGBT teens, and one of the things I like doing is loaning them movies by, for, or about LGBT issues. I loaned a 15 yr. old girl the film "Go Fish," written by Guinevere Turner and directed by Rose Troche. She loved it - as I suspected she might - and asked me why she had never seen it at any of the rental places near her. I told her it was because (1) they probably never heard of it and (2) nobody had ever asked for it. She thought it was sad and has since sought out other films by Turner and Troche as well as other women filmmakers.

WAKE UP, GRRLS! Money talks and bullshit walks; if you want more films by women, SEE more films by women. And don't just be a passive audience member - if you really like a film, hold free showings in your home, start a fan site, organize larger showings with the collaboration of community/campus groups, or write the creator herself. Go to film festivals and help generate buzz about films you adore. And if these things seem like too much for you, start simply by keeping up with your fave female filmmaker's projects and request - with a bunch of your friends - that local theater chains show the film, and that when they bcome available on DVD/VHS, you buy them or express a desire to do so at a store or rental place near you.

Don't we want to see diverse depictions of women on film? Don't we want to see women winning Oscars and Golden Globes as writers, directors, and producers? Don't we want young women to feel like their stories are good enough to be translated onto the big screen? If you answered 'yes' to any of these questions, then go out and DO something about it!

Remember: It's not a 'chick flick' unless a chick made it.

Relevant: The Final Girl Is Still as White as Ever 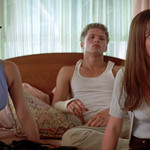 by Vanessa Willoughby
A Final Girl’s whiteness is unchangeable.