As most of you are aware, a few of us from Bitch Headquarters traded gloomy Portland for sunny Austin last week where we spent six days burning our Pacific Northwest skin to a crisp and listening to some bands at SXSW. The highlight of the week for me, without a doubt, was GAYbiGAYGAY, a fabulous backyard party filled with queer bands and artists (and the queers who love them.) 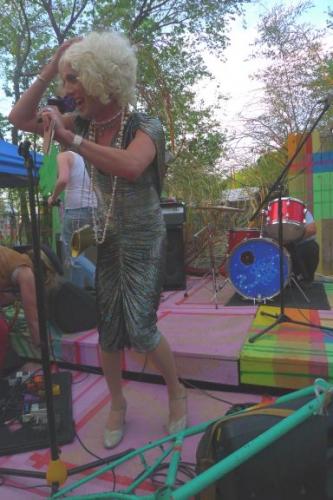 The queer crowd was noticeably absent from the SXSW crowd-at-large (or maybe I just wasn’t looking hard enough?) and fighting the mobs for a week in that Texas heat just to get up front really drained me (or maybe it was the cans of Lone Star beer I decided to drink like water while I was down there?), but in any case, I was quite delighted on both fronts to end the week surrounded by delightfully colorful handmade sets and a delightfully colorful crowd of queers and weirdos of all sorts.

Our little plastic table stockful of fancy-ass Bitch buttons, coloring books, and temporary tattoos had a revolving posse all day long that I had a hard time ignoring (I’ll never pass up an opportunity to run my mouth off about feminism on a sunny afternoon), but every time I turned my head up to the stage, somebody great was doing his/her/their thing. The hilarious Southern belle Rebecca Havemeyer (see photo above) emcee’d the event with equal parts sass, class, and trash. And if you, like us, showed up early and stayed for the whole damn thing, you also got to see Dangerous Ponies, Btox Store, Gretchen Phillips, Polka Dot Dot Dot, BUTCH County, Dave End, Storm Shelter, Purple Rhinestone Eagle, Maple Rabbit, Shunda K of Yo Majesty, Romanteek, Excuses for Skipping, Sissy Bounce: BIG FREEDIA, Dj Fucci, and Lynne T.

The first band I saw was Dangerous Ponies, a really fun dance pop sing-along band from Philadelphia. The music was really sweet–raw sugar sweet, not high fructose corn syrup sweet–and the band’s seven members were all oozing with good vibes. Although their early time slot meant not a lot of dancing from the audience, it turns out that this band is also fun to watch while sitting on a blanket in a backyard. 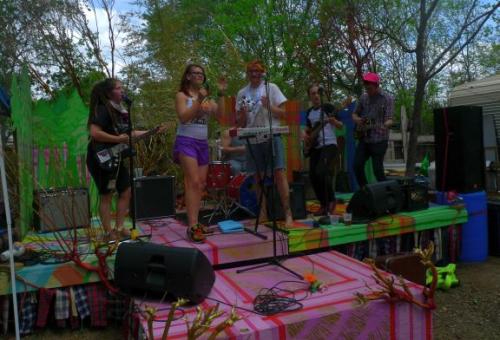 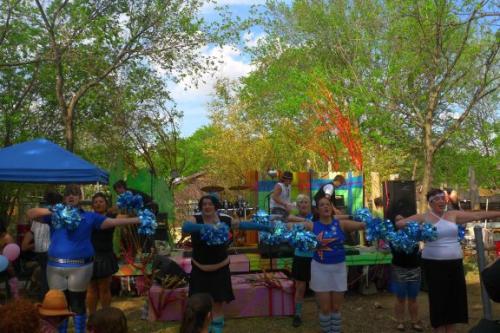 Something else that got me excited was seeing all the fellow Portlanders at the show. One of my favorite Portland bands Purple Rhinestone Eagle played a psych rock set that was nicely accompanied by the rad forest and electric plaid backdrops. And recent Portland transplants Forever, who played at last year’s gay-bi-gay-gay, also made an appearance. Both bands are on tour right now so you might have a chance to see them in a town near you. And it looks like Purple Rhinestone Eagle is meeting up with Dangerous Ponies for a show in Philadelphia on April 3, so you east coasters should go see it! Tell them Bitch sent you. 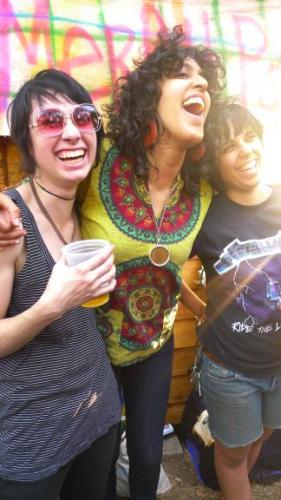 The Pacific Northwest continued to show off its gayness with two other bands, Polka Dot Dot Dot and Romanteek, both from Olympia, WA. Polka Dot Dot Dot played an a capella (minus some occasional ukulele and knee-slapping action) set that kind of reminded me of Jolie Holland’s or the Be Good Tanyas’ music, in a completely original way, of course. I kind of just wanted to crochet their music into an Afghan and wrap myself up in it and lay on the ground smiling. And the Bitch ladies and I couldn’t help but shake our asses when Ruby Valentine from Romanteek took the stage. Their recorded stuff is great, but seeing them live is something else entirely. And they’re on a cross-country tour right now! So go treat yourself right and use some of that unemployment money to go see a fun show. 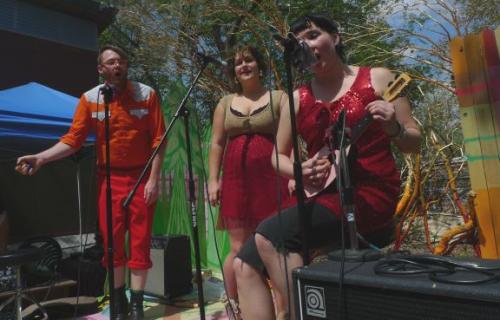 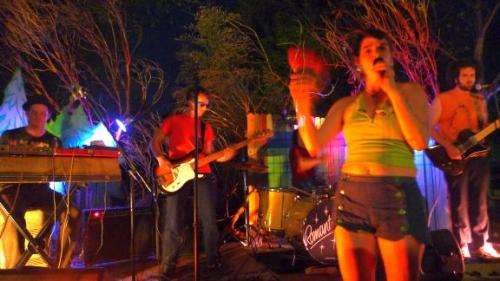 The night rapped up (pun intended!) with some Sissy Bounce, which I hadn’t heard of but is apparently something of a phenomenon in the New Orleans queer scene. Big Freedia is one of the big names of this gender-bending genre and definitely sold me on it. Let’s just say that Big Freedia had no problem getting people bouncing.

Damn! I’m so nostalgic for gay-bi-gay-gay already. If somebody told me I could live anywhere in the universe, I’d say, “I want to live at the intersection of music and activism!” Because it feels so good being surrounded by people are making great music, building inclusive communities, and making people a little uncomfortable at the same time. Thanks so much to Hazey and Ray for opening up their backyard to us. Check out some more photos from the day below! My lovely friend Devaki Knowles accompanied us down to Texas and took all of these exquisite photos, so you should go to her site and give her some loving! Also keep an ear out for our upcoming podcast–we interviewed a bunch of the performers for our Vox Populi segment. 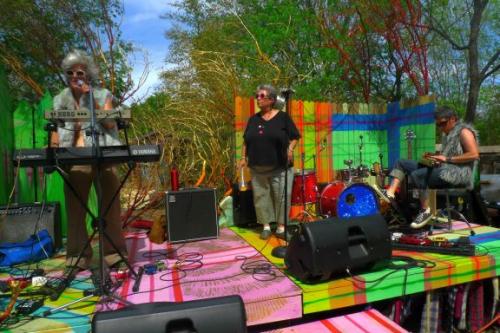 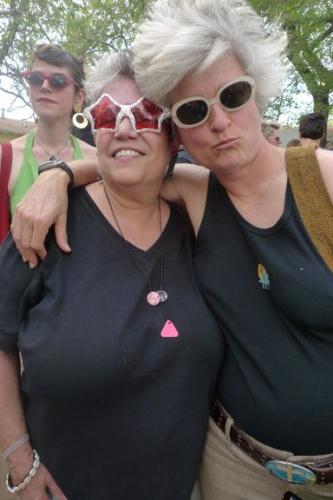 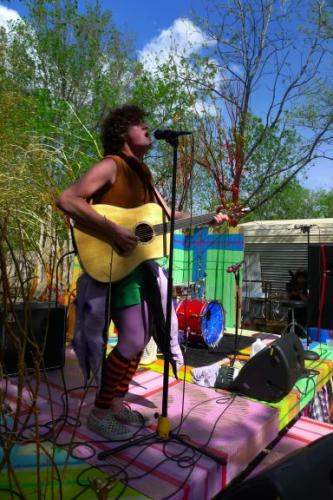 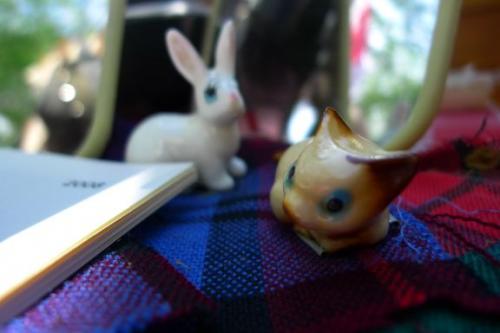 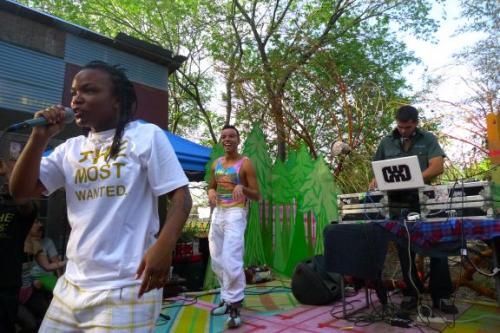 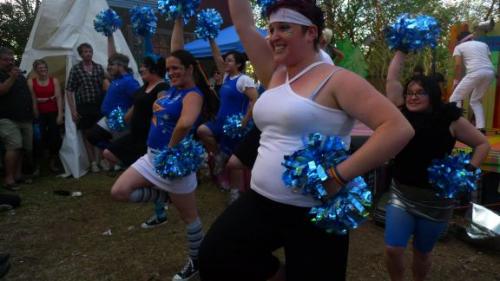 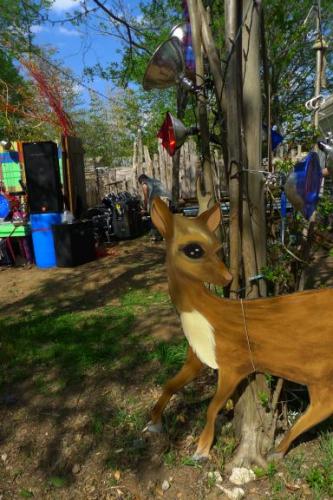 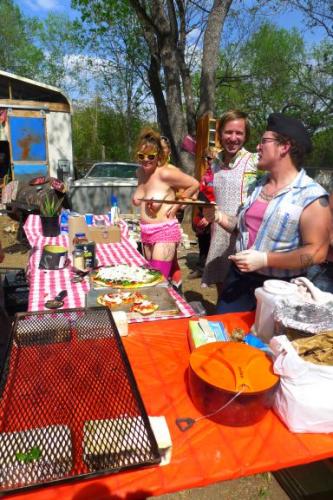 This is so super awesome! Thank you Bitch magazine! 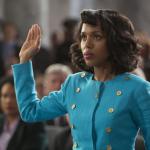