First up is Ozomatli’s new single, “Gay Vatos in Love,” off of their fifth studio release. The hip-hop/Latin/rock music band have tackled political issues before, but this is the first time they’ve addressed gay issues. Raul Pacheco, the lead singer said that the band was inspired to write the song during the Prop 8 debate. “We felt that [gay rights] is just another in a long line of underdogs, so I think we connected to it on that level. It was totally natural for us to take that stance.” Some fans have already made an unofficial video that shows gay couples or friends and family of gay couples.

Within the lyrics, which include anecdotes about “Javi and Kike,” the second verse ends with “Juan Gabriel says amor es amor/But Angie Zapata is lying on the dance floor,” significant because it’s one of the first pop culture references to the 2008 murder of a young Latina trans woman, but also can potential confuse the message of “gay vatos” (vato means “guy” or “dude”).

But Vivir Latino’s Bianco Laureano pointed out, the reference doesn’t necessarily confuse the message of GLBT acceptance since because the reference is

…not a fully convincing recognition to what transmisogny is and how this led to her murder…I interpreted their mention of her murder as not confusing the fact that Angie was a heterosexual Latina, but rather challenging our collective belief that if “amor es amor” then why are we burying more and more transgender women of color each year who are murdered through violent and horrific acts perpetuated intra-racial/culturally?

The band has found the song to be polarizing at concerts, but Pacheco has began prefaced it at shows with a rousing “Do you believe in love?” And well, no one can say no to that.

For more gay vatos in rock, check out a new comic book out from Micocrosm, Henry and Glenn Forever, a comic book featuring one panel gags in a universe where Glenn Danzig (of the punk band Danzig) and Henry Rollins (of the punk band Black Flag) are the kind of “roommates” that have “scare quotes” around the word “roommates.” 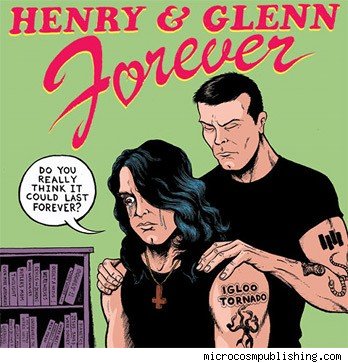 More than a political statement, this looks like a fun fantasy where Danzig and Rollins are an out and proud–but hardcore–Burt and Ernie. One reader described their comix companionship as “a loving, committed relationship. Henry loves Glenn dearly, even if occasionally his anger issues get in the way. Glenn keeps a journal about his ambitions and projects, like being in a band wearing corpse-like makeup (‘Just be yourself!’ recommends Henry).”

What I appreciate about the idea of Henry and Glenn Forever is that it goes beyond the tired and obvious bromance genre. We all know that bros love their bros. But this time around, Rollins and Danzig are reimagined not just as punk icons, but as gay ones. Yes, it’s a funny idea, and it plays into the inherent homoeroticism of early mosh-pit man piles, but it also acknowledges that just as fans are at the mercy of our idols’ creative whims, musical heroes and legends are also subject to the imaginations of the listeners.

Would the real rockers approve? Rollins approves to the point that he contributed a blurb on tha back, but it’s one that reads, “Has Glenn seen this? Trust me, he would not be impressed.”

I have to own this comic. It reminds me of a Japanese dojinshi I once saw about the forbidden love of Thom Yorke and Jonny Greenwood.

the possibilities are really endless.

by Marya Jones
From Yoko Ono and the Supremes to women in punk and hardcore.