While newspapers at home struggle to stay relevant and profitable, reporters abroad struggle to stay alive. Dedicated to exposing the truth, protecting their sources, and improving the quality of life for those living in war-torn nations, the men and women (especially women) reporting intenationally frequently find themselves targeted. Since the Committee to Protect Journalists started keeping track in 1992, 972 journalists have been killed. In her new gallery exhibition of oil portraits, “Frontline Heroines,” Seattle artist Judith Larson puts faces to some of those numbers.

“This represents my return to art, because I had a motive,” says Larson, who herself has spent the last 20 years working primarily as a reporter. Seattle’s Fountainhead Gallery is filled with the large portraits of women killed while working as journalists.

“I’m a world news junkie, that’s what I do,” says Larson. “They aren’t just casualties, this is intentional targeting, and often it’s targeting women because they are women. When we reached a peak—88 just last year—I went down to my studio and cranked it out. I just thought, ‘These people need to be remembered.’”

Larson speaks about the subjects of her portraits as if she knows them. And, in fact, in a way, she does. She’s researched each and every one of them, giving detailed histories of the work they did, the uprisings they were covering, and the often-brutal ways they were killed.

The women’s stories span decades and countries and wars— Mexico, Afghanistan, Iran—but they’re all powerfully similar. There’s Dickey Chapelle, an American photojournalist whose photos of World War II and Vietnam became iconic images, who is widely recognized as the first female war correspondent killed in action. There’s Marie Colvin, an acclaimed reporter for The Sunday Times who died in Syria when her outpost was shelled. There’s Anna Politkovskaya, who was shot in her apartment building in Russia for exposing humanitarian crimes. Shaima Rezayee was a popular host and music presenter on Afghanistan’s version of MTV, who was shot in her home, simply for being a female television presenter.

“They’re soldiers who go into war without a weapon,” says Larson. “They need to be recognized.”

But, says Larson, simply mourning the loss of brave reporters won’t do much to protect those in the future—the show is also about curiosity and awareness and the necessity of a free press.

“These women are keys to either keeping democracy alive, or to put it into progress. And we need to think about that.” 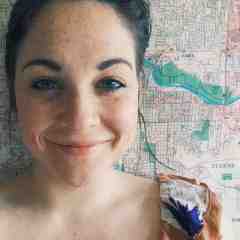 Hanna Brooks Olsen is a freelance writer and consultant who lives in Seattle. Her work has been published in the Atlantic, the Nation, Pacific Standard, GOOD Magazine, Upworthy, the Huffington Post, and a few other places.