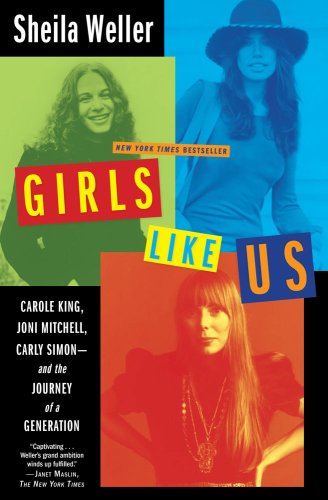 That journalist Sheila Weller’s NYT Bestseller, “Girls Like Us” also features Carole King and Carly Simon is a nice extra, of course.  I haven’t even finished this book yet, but I just have to gush about it.  It’s music history, it’s women’s history, it’s American pop culture history…what’s not to love?

The best description I’ve read so far of “Girls Like Us” is “scholarly and dishy.”  The name-dropping and sometimes-scandalous stories from those in the know are delicious, without making any of the three subjects out to be complete divas, nor saints, for that matter. They are presented as what they are: supremely talented and supremely human, complicated, vulnerable, ballsy, self-deprecating, ambitious, egotistical, long-suffering, emotionally distant, and emotional needy. (You’ll have to read the book to find out who’s what!)

At the same time, the book offers thoughtful commentary on the history and evoluvtion of popular musical forms in the U.S. (doo wop, pop, jazz, rock, R&B; on the racial and sexual dynamics at play in the commercialization of these forms; on how these forms really were the soundtrack to a generation and to entire social movements; and on what life was like for many American girls coming of age in the 1960s.

As the back cover touts, this alternating biography really does “[read] like a novel”.  Even though the prose is engaging when read chronologically, I can’t help thumbing through the book randomly.  On any given page, I can get another great sex, drugs, and rock ‘n roll tale, or some revelation about the political and social backdrop of the era.  Speaking of which…

Weller’s book has given me a first glimpse at Joni Mithell’s personal racial politics.  She romanticized being black, and is rather proud of her “black voice.”  She has reportedly written the first line of her autobiography: “I was the only black man in the room.”  She once dressed up as a stereotypical caricature of a black pimp, complete with black face.  She named the character Art Nouveau, and the image of her in this get up graces the cover of one of her albums Don Juan’s Reckless Daughter.  Considering herself “a painter first”, Mitchell painted portraits of a number of her lovers.  But only her black lover, Don Alias, is painted wearing an open bathrobe with his erect penis fully on display.

Needless to say, my standom is now qualified.

Whether you stan for Joni, Carole, or Carly, or simply love good music and/or a good read…get this book!

Thanks for this post! I've debated buying this book a few times because I'm a fan of all three of these musicians (especially Joni!) but have been disappointed in band/artist histories in the past which is why I avoided it. I will definitely pick it next time!

Speaking of great books about women in music, I was recently vacationing in Portland and visited Powell's Books - I found a great read called "She Bop: The Definitive History of Women in Rock, Pop & Soul" by Lucy O'Brien. Haven't read it yet, but here's the description for anyone who is interested in the rich history of women in music (taken from Amazon):

"What do Madonna's navel and Billie Holiday's eyebrows have in common? They symbolize the "self-definition" and "self-awareness" that British music journalist Lucy O'Brien saw in female performers trying to make it in the male-dominated popular music industry. Drawing on 200 interviews in the U.S. and Britain between 1984 and 1994, O'Brien has written a top-notch, impressively thorough history of women in the industry, including not only performers but producers and sound engineers, even female consumers. O'Brien's definition of pop is very wide, which allows her to riff widely on rock, soul, jazz, world, reggae, rap, country and folk music. Though tied together through O'Brien's strong, feminist voice, She Bop is loosely organized. It opens chronologically, moving through prewar jazz and blues; the "Dream Babes" of '50s pop; the proliferation of female artists in every genre in the '60s; the '70s "rock chick"; and finally, to the ascendance of the girl guitar bands and singer/songwriters in the late '80s and early '90s. Subsequent chapters consider issues, trends and themes, from what Suzanne Vega termed the "cleavage question" to "protest" pop to androgyny and sexual orientation. O'Brien doesn't gloss over problems: she wrestles with the complexities of using sex for success, the impulse toward self-destructive behavior and the lack of solidarity among female musicians. Overall, though, the message of She Bop is straightforward and positive: You've come a long way, baby."

Thanks for this recommendation, Cassandra! The breadth alone of this one makes it a must-read for me. Adding to my wish list...

Listen live as Frankie “Avenging Angel” Russo conducts the ultimate talent show of the nation’s top female performers! Each show Frankie and his panel of New York theatre and entertainment co-hosts are building an impressive performance team that will be judged on their appearance, performance of a special talent, and personality.

Frankie will ultimately host a live performance in the tri-state area where you can see the girls in person.
Friday’s at 10pm-11pm EST
Call in at 877-CHAT-212

This sounds great! I am a big fan of Chataboutit.com...if you're not up on it yet you should check it out. There's something for everyone =]

I have an embarrassingly limited familiarity with the music of any of these 3, but I do remember my dad listening to Joni lots. I think I was too young to respond and I've always meant to return to her on his recommendation. I remember that her style was completely her own. So before I read the book, I better get to listening...thanks for the reminder!

Briar: Some will disagree with me probably, but start with the "Court and Spark" album by Joni Mitchell. You will love it!

<a href="http://feministreview.blogspot.com/2008/06/girls-like-us-carole-king-jon... Review</a> wasn't entirely impressed w/ this book; the writer wanted it to be more of a history and felt like he got the gossip pages.

<i>Scholars of classical music probably won’t be picking up this book, so it’s a littly mystifying that Weller is trying to win over potential critics of her “light” subject matter by casting Simon, King and Mitchell as cultural icons, representing their generation of women; doing that, Weller misses the whole point – it’s not the women themselves, but their music that partly represents their generations (no one thing can represent a population as diverse and complex as millions of young women).</i>

Huh. I wonder if this same reviewer quibbles like this with the assertion that Bob Dylan is "the voice of a generation."

The music didn't make itself, and the women who made this music didn't spring from thin air, nor did they exist outside of the social context of the times. I thought it went without saying that no one thing can actually represent millions of people, so the hyperbole "voice of generation" is generally understood by the average reader.

<i>Again, it’s unfortunate that Weller doesn’t really delve into the music too much...</i>

Wow. Admittedly, I haven't finished it yet, but I'm thinking we didn't read the same book, lol!

It's always interesting to me how people take such different things away from what they're reading. Now I'm going to have to read the book myself. LOL!

I read an excerpt last night from this book in Vanity Fair. Looks great. Hard to believe there was so few women prominently in the music business back then. These three paved the way.

I'm also sending thanks for the book review. This is going on my (already long) must-read list.

Deesha, you describe the singers as "ballsy." I agree, but may I suggest other words that don't equate courage with maleness???? Unless we start a "titsy" revolution, I suggest gutsy, nervy or just plain old courageous.

I'm a real fan of this this book. I love Sheila, the cover and the women it's written about! When I just read the title of the songs the music began playing in my head blowing my mind away through the memories and nostalgia. This music was a huge part of my life, especially Love Song to a Stranger. Even now, I'm using it as a source of inspiration while writing something romantic.
Thanks Sheila....

The grating self-aggrandizement of that dedication aside, the reality and the relief of this book is that it doesn’t set out to scold us. Weller, a journalist whose other books include the 2003 memoir “Dancing at Ciro’s,” is more interested in exploring how these three distinct yet dovetailing artists bucked the expectations that had been laid out for them by previous generations and blazed a new path for women to follow.

Female pop culture icons don't elicit much sympathy. Because they seem to have it all like money, fame, rewarding careers. it's hard to believe they'd ever be as insecure, lovelorn, unfulfilled, or downright needy as ordinary schlubs like you and me.