To the three or so people out there who did not dress as Sarah Palin for Halloween last year: Fear not. This year you can go as Sarah Palin, bestselling author! That’s right, the former governor of Alaska and perpetual wackjob has a book out on November 17 entitled Going Rogue: An American Life. It will undoubtedly be available at a corporately-owned and homogenized chain bookstore near you in time for the holidays. What a maverick! 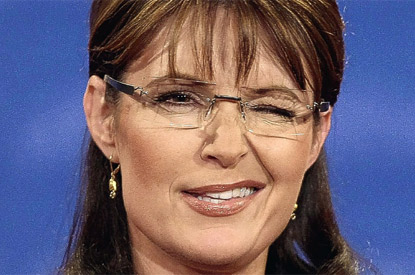 Only the rogue-iest of rogues would publish a memoir with HarperCollins!
It is no secret that Sarah Palin is anti-feminist (and we’re not so fond of her, either) so we don’t feel a bit bad speculating a bit as to what the gun-loving, God-fearing pages of Going Rogue will have to offer. Feel free to make as many guesses in the comments section as you’d like! There’s probably still time for our suggestions to make the final print run. (Which, btw, is starting at an unbelievable 1.5 million copies. Do that many people really want to read about beauty pageants and rape kit price hikes?)The first thing to keep in mind is that the entire book was written in only two months, with the help of former World Magazine editor Lynn Vincent. World is a conservative Christian publication, so we can count on that influence playing a major role in the memoir. No surprise there.We can also count on Ms. Vincent exercising a heavy hand in the actual writing of the memoir. After all, does anyone remember this “rogue” (read: insane) speech of Palin’s?

Yeah. She’s not the world’s best sense maker, so she’s going to need some help in that department.In addition, Palin plans to focus the book on the “grueling interviews” and frustrations she experienced as a Vice Presidential candidate. She claims she was treated unfairly by the liberal media (where does Bitch fit in to that equation? Do you think she thinks we’re too liberal?) and now is her chance to tell 1.5 million people about it. This will probably involve a lot of confusing colloquialisms and weird finger pointing. Translators will perhaps be necessary, so book your folksy Alaskan now to avoid the rush.Of course, this description of Palin’s “American Life” will no doubt include many details about her personal politics and family life. Pregnancy, snowmobiles, and hunting will abound (maybe even at the same time). Hopefully there will be some shirtless photos of Levi Johnston in the mix at least, right? Or maybe Palin will address Johnston’s statement that she let he and Bristol sleep in the same bed together while they were dating. You know, before they had a baby (but probably while they were making one). And speaking of Johnston, it might be a tad unrelated but we would be remiss if we did not include this gem of a Johnston video clip:

Hilarious. When is his memoir coming out?
So what are your predictions for Going Rogue? Will anyone read it? Will we learn anything new about Sarah “Barracuda” Palin that actually matters? Will she ever get out of the spotlight and stop driving us insane? Only time, and a massive print run from HarperCollins, will tell.

I have had penchants for humiliation and am one of the three or so people who have not dressed up as Sarah Palin on Halloween. Even though I went out in full drag on many Halloweens in the past, I think donning a stars and stripes bikini and hunting rifle (she posed by a pool for a photograph in that outfit) would be too bizarre even for me. Fortunately there are people like Tina Fey and Sara Benincasa who can lampoon Sarah Palin with the seemingly endless supply of material that results from her insatiable quest. Yes, Sarah Palin is trying to run for a position of national power (shudder). No, I will not (choke, puke) be reading the sickening tripe being marketed (passed off) as a partly Sarah Palin authored "book". Yuck. It's hard to type this after watching that jaw droppingly ludicrous Kathy Griffin - Levi Johnston appearance. It would all be incredibly hysterical if Palin weren't so narrow-minded, mean, lacking in conscience, and almost psychotically dangerous.

The photo you mentioned above was a photoshop hoax.

<p>I was totes Sarah Palin for Halloween last year Kelsey! Gawd, you know your readers so well.</p><p>On a related note, I'm a little terrified of<i> Going Rogue</i>.</p><p><i>Take note: Opinions expressed are those of their respective authors, not necessarily those of</i> Bitch. <i>Dig?</i></p>

What a horror show right before Halloween. I was just doing a little reading on the subject of Sarah Palin's "Going Rogue" over at the Huffington Post. On a positive note, there is more humor to be found in it. Had you seen "Sarah Palin's Top Ten Tips For Writing A Book" on the David Letterman Show? The video is posted at
http://www.huffingtonpost.com/2009/09/30/sarah-palins-top-ten-tips_n_304... On another positive note, The Huffington Post ran a short article today about Palin's lectures not selling. Apparently big lecture buyers think she is a "blithering idiot". Unfortunately the well-oiled Reptilian machine has bulk-bought copies of the printed Palin "Going Rogue" manurefest and and the right-wing-nut media clones may try to hold the refried turds under our collective nose (ugh). Will we be spared some of the Palin propaganda by Michele Bachmann is horning in on right-wing crazy-fest media coverage? She got her own "Big News" page over at the Huffington Post. Is Sarah Palin get out-crazied? I got some laughs checking out http://www.huffingtonpost.com/news/michele-bachmann but it's sobering to realize that Michele Bachmann actually proposes and votes on legislation.

I totally love Bitch, but in the last two posts there've been some instances where Christians were (seemingly) criticized solely on the basis of their faith. True, there are a great many people who claim to be Christians (or who are) who are conservative, close-minded, and sometimes just plain ignorant. But could we insult/criticize them for *those* things, rather than blaming it on their faith? You could call me a Christian (though the word is so twisted now) in that I try to follow Jesus and the Bible; but I'm a liberal, open-minded feminist who believes that what both of the aforementioned teach are love for everyone at chief importance, and the people who misuse those teachings are doing just that- misusing. Just because someone is "God-fearing" doesn't automatically mean they're ignorant assholes, and just because some Christians are fighting for sheltering the hell out of kids in schools with "don't have evil, dirty sex, period" others are awesome people who are quite reasonable, and fighting for the same things the rest of us are. Thanks.
~tabitha~

Well there really is only one comment I have about this...this monstrosity of a "book" and that is, that I'm not so concerned about the "book" itself but rather how much it will sell.

and oh yes there will be book sales.

A madwoman can only talk, the true madness lies with those that take whatever lunacy she is spewing then goes and applies it.

So, Im not really concerned about the "book" itself, but rather when it becomes a best seller and gets put on the Opera book list or whatever...because lets face it ladies chances are its going to happen. Womp Womp.

you people are evil!

My AP English teacher read this out of curiosity. One day she was reading while we were working and started laughing uncontrollable... Palin had actually used "mavericky" in a sentence.