Fox News is giving half the story again, this time in a report about bra sales in Australia and the cup sizes associated with them. The message the Fox story sends is that these giant-breasted women got that way because of birth control, obesity and artificial hormones. In a story from The Daily Telegraph story, which Fox links, the causes are defined as age, estrogen from plastics and cosmetics and the reality that even smaller women have larger breasts these days, in addition to the obesity and birth control arguments. And that is just the beginning.

While the Telegraph story is a bit more diplomatic in its assessment of why bra sizes like J and K exist now in Australia, both stories offer up a few statistics to paint a picture that is not exactly the reality. For example, both stories juxtapose the average bra size in the 1950s (a B-cup) against numbers like an 8% increase in DD-cup sales in five years, which would lend itself to the notion that breasts are getting out of control. Yet recent research suggests that people are getting evolutionarily larger and taller in general. A Daily Mail article from 2007 supports that theory and also scoffs at the claims that birth control hormones could be a factor, because the hormones in todays pills are no where near as strong as they once were.

But you're right, Fox; it's probably just due to those over eating, over sexed ladies. Thanks for the update!

Of course, some of it may just be that women in Australia and Britain get the correct cup sizes for their bodies, and now that attractive options are available in larger sizes, people may also be expanding their ligerie wardrobes as they didn't back when pretty styles topped out at a C cup. Meanwhile, here in the US, legions of larger-boobed women wear ill-fitting bras because of a lack of access.

Speaking for myself, I'm really around a J cup, but typically wear DD or DDD with a much larger band, because that's what goes on sale and is try-on-able here in the states. The internet is great, but after having paid a bunch of hefty return shipping charges, I'm saving up before I try, once again, to find a bra that will fit as it's 'supposed' to. Until then, I'll make do with what's available, artificially narrowing the bell curve of boobage here in the US.

whenever i hear boob statistics, i am filled with questions. for instance, if, as they say 80% of women wear the wrong bra size, how can we accurately assess an average boob size anyway? where does that research come from?

and the other important question i think was where did the statistics from the 50's come from? i remember reading in newsweek long long ago that the research for average age of menarche was based not only on all white british girls, but specifically girls in one particular place. maybe that isn't true, but it's important to find out what the samples are like in studies like this, since in a white supremacist patriarchal society, you can expect pretty much anything like this to be skewed somewhere along the line. when they counted 'averages' in the 50's, were they including samples from diverse ethnic backgrounds? because i am willing to lay down good money but in the 50's we're lucky if they were counting non-northern european girls, not to mention non-white girls.

which is not to say that british women have smaller breasts than other women or any nonsense like that, but there are phenotypes associated with growing up in certain places and/or having ancestors from certain places and if it were the case for any group not previously included in the sample that that group's averageor mean boob size was larger than the average or mean of the previously less ethnically diverse study, without any external factors being involved, the supposed all over 'average' could totally change.

I clicked over to the full Daily Telegraph article and thought it was interesting that they pointed out the correspondence between bigger breast size and decreased physical activity. Maybe if more brands started making bras for D cups and bigger (and made them more affordable) breast size would start to reduce as women were able to participate in physical activity more (as someone who is in the D-DD range, I can attest the the awkwardness/uncomfortable-ness of trying to exercise without a good bra not to mention the difficulty of finding one that doesn't break my budget).

Furthermore, what is 'wrong' with bigger breasts? When I toned up and got to a healthier weight, my bust size only went from a DD to a D, no silicone or hormonal birth control involved. Sorry Fox, I'm just a big busted gal. I don't think there is such a thing as an average (read normal) breast size because there is no such thing as an average (also read normal) female body. 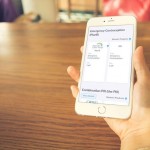 by Hilary Saunders
The company aims to make contraception easy and affordable—just like it should be.