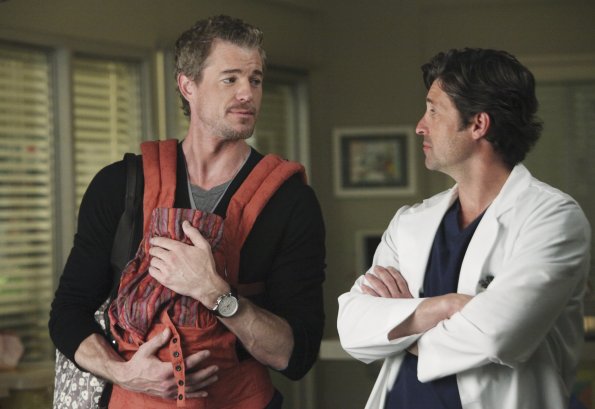 s.e. smith: What kind of attitudes about international adoption came up in this episode? How do you think Grey’s is handling this storyline as it unfurls? Snarky’s Machine: Grey’s is making a real mess of what could be intriguing analysis, by refusing to have conversation about trans-racial adoption. They’re playing a dangerous game if they truly think blacks have a monolithic experience and Zola will be all right with white parents because they work with some POCs (none of which have been identified as being from the same culture as Zola). Redlami: I was wondering why the adoption interviewer didn’t address the race issue with Meredith at all. The whole adoption storyline really has me perplexed. For example, why is Meredith suddenly worried about finding time to be a parent? Did she not consider this during all the months she spent trying to get pregnant? Everett Maroon: I did like the depiction of the interview with the social worker, who was more than capable of seeing good parenting capacity in its many forms than Meredith thought she would, and it was nice, for a moment, to see relief on any of the character’s faces, because this has been one hell of a stressful season. Once again, however, Grey’s is moving through these plots very quickly, and perhaps the usual 24-episode season would have worked better for this storyline better than the abbreviated 22-episode schedule—I don’t know anyone who gets to the interview stage of adoption that quickly! And we really do seem to be glossing over the trans-racial, trans-national aspects of this adoption process. s.e. smith: The work/life balance for parents in surgical careers can be grueling. Has Grey’s done a good job of depicting this in the past, and how do you think it will be handled in the future, especially considering the fact that Zola has disabilities? Snarky’s Machine: If anything, I think having parents who are doctors would be worse for any kid regardless of their ability status. Growing up in a family with clinical folks we didn’t have so much as a band-aid and we were at the mild end of the spectrum. I think Zola would be better off with a family who weren’t so used to seeing illness, injury and trauma—they have a tendency to diminish all but the issues they deem most serious. Redlami: I don’t think the show has begun to scratch the surface of the transracial or disability elements of the Zola adoption storyline. But Callie’s difficulty in letting go of Sofia in order to break some bones gave a good suggestion of the conflict that highly driven professionals might feel when trying to find balance between work and private lives. Everett Maroon: I think we’ve seen a good amount of lonely, young Meredith stuck at the hospital, but we’ve also seen Miranda making time for her child, so there’s some model of how it can be done. It does strike me as unusual that so few of the doctors on the show have raised kids, but hey, the ensemble is about as big as it can get already. As far as Zola’s disabilities, they’re really only brought up in terms of how challenging she’s going to be, which is at once understandable given their medical perspective, but really dehumanizing. At least nobody’s talking about how they make her extra special. 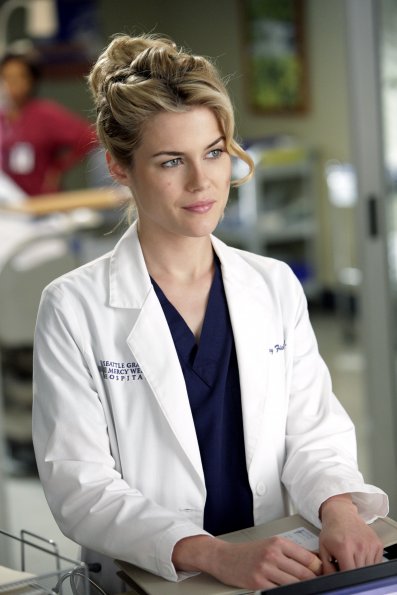 See you next week with “Unaccompanied Minor”! About your bloggers: Snarky’s Machine is the founder of the pop culture site I Fry Mine in Butter. Everett Maroon is a Seattle-based writer, focusing on popular culture commentary, speculative fiction, and memoir. His interests include the interrelationships of characters on Grey’s Anatomy, Dr. Bailey, behind-the-scenes politics, and Dr. Bailey. Tasha Fierce blogs about sex, dating, relationships and body image at Sex and the Fat Girl. s.e. smith is a cantankerous, cat-wearing, pop culture-loving, pants-eschewing philistine from the wilds of Northern California with a compendium of largely useless random knowledge and a typewriter that doesn’t know when to quit. smith writes at this ain’t livin’. Redlami turns numbers into stories and is the resident tech geek at I Fry Mine in Butter.

Bailey wasn't chief resident her year, Callie was because the Chief thinks Bailey is a better surgeon than administrator, the same reason Christina won't get the position. My money is on April.

Callie was the Chief Resident! Wasn't Bailey the CR in the first season?

Callie was chief resident but she couldn't handle it so she quit and the job went to Bailey :)

At the end of season 3 Callie was named Chief Resident. (episode "Didn't We Almost Have it all") However, after Callie made a slew of mistakes the Chief realizes his mistake and removes Callie from the position and gives it to Bailey. The first year of the show Bailey was a Resident and the rest of the characters (who weren't attending physicians) were interns.

Not sure what you're correcting, because you are wrong.

"In season four, Miranda decided to be Callie's "number two," as Torres was lacking of competence as Chief Resident. The Chief saw Bailey pick up the slack, and delegate exceptionally well, and eventually realized that Miranda was covering for Callie. He terminated Torres from the position, and told Bailey that he made a mistake in not giving her the job in the first place. He also apologized for taking Dr. Bailey for granted. "

<i>Did she not consider this during all the months she spent trying to get pregnant?</i>

I didn't actually find this unrealistic. You'd think it'd be one of the first things to address, but I've known a surprising number of women who seemed to separate "pregnancy" and "baby." I've been on the receiving end of many an "aaaaahhhh! I have a baby now! What do I do!?" conversation.

So, for me, it was a facepalm moment, but it didn't ping as unbelievable to me.

<i>If anything, I think having parents who are doctors would be worse for any kid regardless of their ability status.</i>

While my parents weren't doctors, my mother was a nurse, and frequently got called in to work because of emergencies. Holidays and birthdays were frequently either minimal affairs or they were rescheduled to a day that Mom had off. While I would certainly never say that two doctors can't be good parents, or that they shouldn't be allowed to adopt, the issue of quality time with the child is definitely something that shouldn't be ignored, especially with both of them being in an especially intensive field of medicine. (At least, I'd imagine surgeons get tapped on call more than your average general practice doctor.)

I'd also agree with the "diminishing issues" assessment. I remember having to fight with my Mom to go to urgent care when I dropped a glass and ended up with a two inch gash in my foot. Compared to what she'd seen, it wasn't serious, we could just use butterfly closures and steri-strips, it'd be fine! I actually have a permanent hip injury because I fell out of a swing, and my parents didn't deem it serious enough to get checked out. (Granted, I was an active, clumsy child who fell <i>a lot</i> but when I was still having trouble from the hip months after the fall, it really should have been checked out.)

Re: Chief Resident frontrunner... my money is on April or Alex, I see them both as being fairly likely. I'd edge towards April because it's pretty obvious Alex has been doing a lot of things he has simply to edge forward in the race, whereas most of what April has done is simply because that's the kind of person she is and the kind of things she does. So if they're paying attention to the motivations behind actions, I'd hope it would go to April. (I also think April would handle the management side a lot better than Alex would. She's a lot more organized, and I'm put in mind of the scene where Alex is scrambling because he's got all these kids coming in from Africa and he totally doesn't have everything in order.)

Re: folks moving on... I won't be sad to see Teddy go either. It's not that I dislike her, but she's never really caught me the way some of the other characters have, and the whole love triangle thing has just been more facepalm-worthy for me than anything else. I'm probably more sad to see Lucy go, although I think her one-upmanship of Alex was pretty awesome, considering that's the kind of move he would make. Nice to see the guy get a taste of his own medicine.

Re: finale predictions... I've no idea, but it's Grey's, so I thoroughly expect to be screaming at my tv screen this time next week. :P