Grand Rounds: Dissecting Grey's Anatomy: It's A Long Way Back 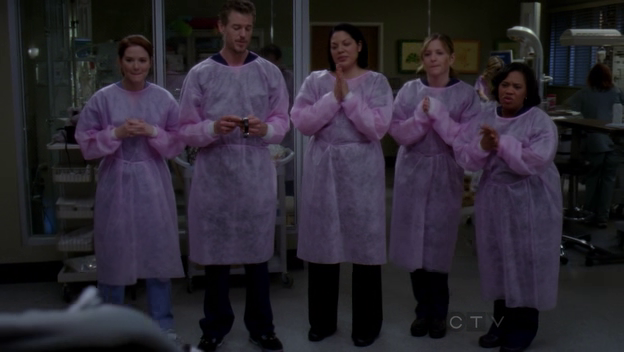 Everett Maroon: A month can’t seem to go by without the residents making a major ethics violation. Tonight we saw Meredith and Alex both break major rules/laws; what do we make of their justifications as they did this?

Snarky’s Machine: Technically, Alex didn’t break any rules. Lexie was conflating the rule about clinical staff serving as executors of wills and such. It was definitely in bad taste and probably worthy of a strong talking to, but wasn’t on par with what Meredith did, which completely undermines the clinical trial. I was actually surprised Grey’s would go there. People already tend to view clinical trials with unmasked suspicion and it seemed a huge character leap for Meredith. Since when does she care about Richard or Adele? Hasn’t Meredith spent the better part of seven seasons telling Richard to stop acting like a father to her? Yet now she wants to play daughter.

s.e. smith: Colour me unimpressed. We saw Meredith’s rulebreaking coming up, and it illustrated the importance of double-blinding that study, which they should have done in the first place. There’s a kind of tradition of docs bending the rules for each other/family and Meredith’s actions have just invalidated a major clinical trial. As for Alex, well…it seems very true to form that he’d get in over his head, and get bailed out in the end. He was probably the only character bold enough to push through on that project, though.

Redlami: In all cases—including the residents sneaking Callie down to NNIC to see her baby—it seems that good intentions led into shady territory. When Adele mistook Meredith for Ellis, I understood this to mean that Meredith is carrying some guilt for Ellis’ affair with Richard and that might be part of her motivation. I was exceptionally troubled by Meredith’s switcheroo to ensure Adele didn’t get the placebo. It could invalidate the entire study, destroy both her and Derek’s careers, and it is most certainly going to create a problem in their relationship down the road. It was interesting that Alex was too preoccupied with his own ethical lapses to figure out what Meredith was up to. But while Alex’s actions may have been just as unethical, they don’t seem to be creating any ongoing problems for him or Seattle Grace/Mercy West. Yet.

Everett Maroon: Some of the patients presented tonight were on healing courses, and some were spiraling down. In light of the theme for this episode, what, if anything, is Grey’s saying about journeying back when people are progressing toward death?

Snarky’s Machine: I found this episode not to have much to say on either, honestly. It was a mishmash of storylines that didn’t add up to much or intersect in interesting ways. This is the lull before some minor event becomes the catalyst for the season finale.

s.e. smith: It seemed to reiterate common themes of the cyclical nature of life, with Adele rapidly failing even as everyone is celebrating the new baby. I think what it really underscored is that life goes on, even in death, and that grieving people are not actually wandering around being unilaterally sad all the time. I hope that the show touches on this more, and embraces the complexity of death and grief more than it’s done in previous seasons.

Everett Maroon: What do we make of the relationships that haven’t quite connected, like April & Robert and Adele & the Chief?

Snarky’s Machine: I think Adele and the Chief connected, otherwise they probably wouldn’t have gotten married. However, his work life overtook his personal life and it seems he never made time for Adele or made his relationship to her a priority. If anything, this is being framed as a punishment to the Chief for not taking his marriage more seriously, rather than a nuanced examination of Adele’s condition.

s.e. smith: One of the problems with an ensemble cast is the issue of trying to fit in way too many characters and storylines without boring or frustrating viewers. I feel like some of these folks have been poorly served by the show’s need to keep Mer-Der in the spotlight. It’s hard to know what to make of those relationships because we’ve seen so little of them in recent episodes.

Redlami: Even with his apparent softening in tone with everyone else, Dr. Stark (I can’t bring myself to call him Robert) is still chilly toward April. I’m interpreting this as an expression of his hurt feelings that she rejected him. And while at first I took it at face value when he told April he was only interested in sex, now I’m not so sure that he wasn’t just using that as a cover. Stark seems to represent an older generation of male who had to hide any hint of sensitivity and gentleness behind a gruff, professional exterior lest he be seen as less of a man. Perhaps he too is on his “long way back” from whatever life experiences created the hard shell Stark is hiding behind. 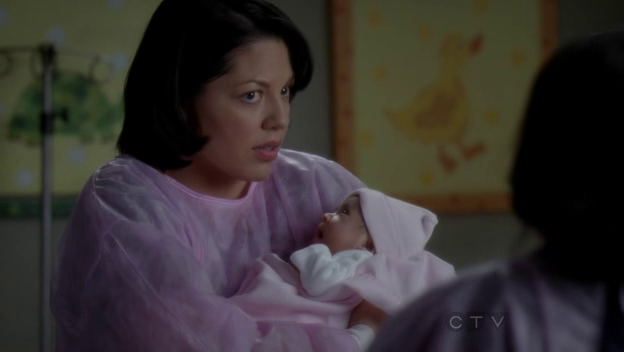 Everett Maroon: After the “long way back” that Cristina took through most of this season, talk about the 3 months in 60 minutes in which we watched Callie and the baby’s recoveries. What impressions do you have about these recoveries tonight, and what parallels did you see with how PTSD was presented earlier in the season?

Snarky’s Machine: What I took from the swift recovery was that physical pain can sometimes heal more quickly than emotional pain. Or maybe the writers got wise and decided not to drag it out for months. Most likely, the writers were uncomfortable with the idea of allowing the audience to see Callie as disabled any longer than they had to, which I find rather offensive.

s.e. smith: The long, slow recovery at the beginning of the season created a nice counterpoint to this crunched storyline; what viewers really took away from that was that recovery is boring, on a day to day level, a lot of the time. Focusing on milestones in the compressed storyline worked so well here because viewers already knew from earlier in the season what daily experiences are like, and what kinds of battles the characters were fighting internally while they were offscreen. I suspect Callie may have PTSD from the accident, and I am interested to see if that gets overwritten as “new mother nerves” and she misses getting the treatment she needs as a result.

Redlami: I appreciated the compressed timeline, which was probably only possible because several stories were being told in the same time frame. Callie’s recovery could have been just as excruciating to watch had it been stretched out over multiple episodes. If anything, we saw how pushing yourself too hard as Callie did could have consequences even more dire than avoidance.

Everett Maroon: Teddy’s freezing out Cristina from her service, and in her personal life, it’s fakey husband vs. fly-by-night therapist. What’s going on with Teddy, and what do you want to see happen with her character?

Snarky’s Machine: Teddy smells like she’s going to be written out. She had no interactions with the main characters; not a good sign.

s.e. smith: Ugh! I want to see Grey’s stop throwing her character away, is what I want to see happen. I’m so tired of seeing her bounce around from man to man like that’s all she knows how to do when the woman is a heart surgeon with experience in high stress situations. I want to see more of Teddy in the OR, kicking ass, and I want to see Teddy growing into herself more instead of being depicted as clingy and needy. 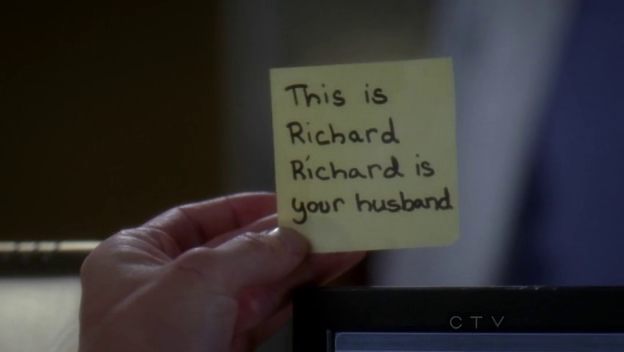 We’ll see you next week with “White Wedding,” directed by the fabulous Chandra Wilson!

More about your writers…

Snarky’s Machine is the founder of the pop culture site I Fry Mine in Butter.

Everett Maroon is a Seattle-based writer, focusing on popular culture commentary, speculative fiction, and memoir. His interests include the interrelationships of characters on Grey’s Anatomy, Dr. Bailey, behind-the-scenes politics, and Dr. Bailey.

s.e. smith is a cantankerous, cat-wearing, pop culture-loving, pants-eschewing philistine from the wilds of Northern California with a compendium of largely useless random knowledge and a typewriter that doesn’t know when to quit. smith writes at this ain’t livin’.

Redlami turns numbers into stories and is the resident tech geek at I Fry Mine in Butter.