Welcome to Grand Rounds: Dissecting Grey’s Anatomy, a roundtable on Grey’s Anatomy featuring Snarky’s Machine, Tasha Fierce, Everett Maroon, Redlami, and s.e. smith. This week’s Grand Rounds is hosted by the incomparable Tasha Fierce. Without further ado, let’s begin! Tasha Fierce: In Meredith’s voiceover in the beginning of the episode, she talks about gambling. How do you think this theme played out? What are some examples of gambles taken? s.e. smith: Hrm, I actually didn’t feel much of a connection between the voiceover and the events of the episode. I felt like a lot of characters, I guess, were gambling in terms of seeing how far they could push it before the other characters would snap and lay down the law. Everett Maroon: We seem to have come full circle to the beginning of the series in some ways with the return to focus on Alzheimer’s and Meredith’s mother’s legacy. Certainly the study patients are gambling that they’ll get the trial medicine and not the placebo. Maybe the meta narrative here is the big question of whether a person will lose their sense of self at some point in their life. In terms of the single episode, Teddy certainly took a chance repairing the baby’s aorta in her 30-minute window, but I’m not sure what her alternative was in this case. Redlami: The whole idea of clinical trials are of course a bit of a gamble, very poignantly displayed with the Alzheimer patient. The slingshot guy also was clearly engaging in risky behavior, which Owen slapped down for not being worth the payoff. Snarky’s Machine: Meredith took a gamble on her mother’s legacy. While it seemed as though she was setting aside to allow the Chief the closure he’s clearly seeking from Ellis, I think it was interesting that she opted not to continue her mother’s work, given much of her self concept is wrapped up in Ellis Grey’s opinion of her. Still, it demonstrated some growth on her part, though after the fuss she made to join McDreamy’s study last week it seemed a waste of story arc. Now Callie asserting herself with Mark and Arizona; that was amazing. Tasha Fierce: Karev gets in trouble with the obstetrics doctor and Arizona over calling a brain-dead baby a “turnip”. Although brain death is probably not something that you would classify as a disability, did you feel there was a certain level of ableism in his comments, or was he just insensitive? s.e. smith: He was both ableist and insensitive. Referring to human beings as ‘vegetables’ is ableist and while a person with clinically demonstrated brain death is no longer capable of consciousness, that person has a family. Not to mention that people who are capable of cognition are often dismissed as ‘vegetables.’ I get that Alex was eager for transplant material, but I wonder if he’d have been so callous if he’d known from the start he was talking to a doctor, not a nurse. Everett Maroon: He was certainly insensitive, and there’s a slippery slope associated with his comment—at what point is it okay to dismiss a human life? When it’s in a persistent vegetative state? When it’s profoundly mentally limited? On the other hand, isn’t Alex just saying—inarticulately—what doctors are trained to think? That when brain death occurs, we should think of people as organ donors? If I were the doctor in earshot, I’d have been ticked off, too. Redlami: It’s probably difficult in a field like medicine to avoid seeing patients as a collection of symptoms, and organ donors as just so many raw materials. And face it, Alex has always been a bit of a jerk. At least his character actually seems to learn from the women who give him the smackdown like Lucy did in this episode. And let me add that I like the Lucy Fields character, particularly how she managed to recognize Alex’s progress without going so far as to encourage his advances in the slightest. Snarky’s Machine: Karev was so blisteringly problematic with the lady doctor I was stunned when they didn’t immediately shag in the supply cabinet. Isn’t that the way of Grey’s. The writers did a sloppy job of demonstrating what ultimately Arizona had to explain to us: Alex is a bad person who is great with patients. 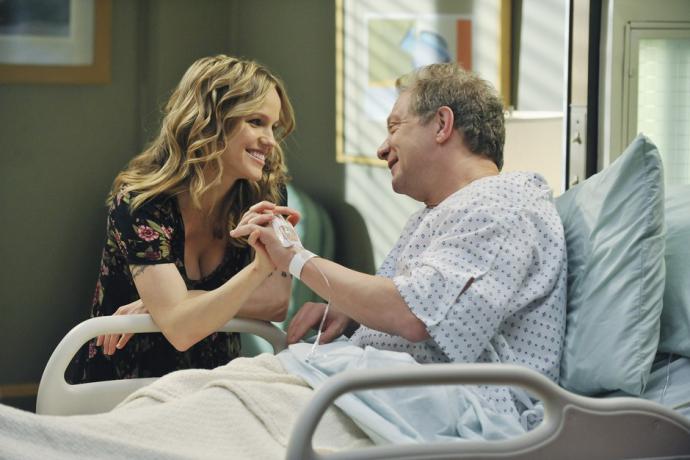 Tasha Fierce: Is anyone else highly amused by Mark luring Avery to run reconnaissance on Lexie by promising him surgeries? s.e. smith: Eh, I was more interested in the ‘you’re pretty, so you should work in plastics’ lecture. Doesn’t surprise me to see Mark engaging in high-school level shenanigans to try and win his girl back. Everett Maroon: I loved it! I’ve had it with Avery as a plot device—sex object, punch-thrower, leftover from Mercy West—and I want to see him be vulnerable and have others engage him on that level. I especially enjoyed that even though he did as Mark asked in talking to Lexie, he didn’t reveal what she’d said. It gives his character a very interesting nuance. What will he do with this information now? How much more connected does he feel to another resident because of their conversation? Redlami: Mark has clearly demonstrated that he is willing and able to draw on his arsenal of beauty, charm, and privilege in the service of getting his needs met. What I find more problematic is the weird parent/child dynamic between him and Lexie; at this point I have a hard time figuring out who’s enabling whom. Snarky’s Machine: I guess I figured they were giving Avery something useful to do. Don’t understand the point, unless they are hastily trying to slap together a story arc for him. Tasha Fierce: The sad effects of caffeine addiction were on display in this episode as Callie is forced to go through withdrawal because Arizona and Mark won’t let her drink coffee due to her pregnancy. Share your stories of caffeine addiction! s.e. smith: I drink a lot of tea? I’m interested to see how this dictating to Callie ‘for the baby’s health’ storyline works out and I was glad to see her put her foot down at the end of the episode. Her and her extra special vagina vote. Everett Maroon: Thank God Callie laid down the law with those two! If every vagina in the US had its own vote, it would be smooth sailing for our political system. As far as caffeine withdrawal goes, I suffered through a three-week headache when I was 35. My blood pressure was out of control after three grande lattes from Starbucks a day. I haven’t actually bought a Starbucks drink now for oh…three years or so. Life is much better. Redlami: More than just being about coffee, I saw this episode focusing on Callie claiming dominion over her own body. She started to process this out loud when defending the human slingshot’s rights. It came to a very satisfying conclusion when she declared that her three votes (for her, the baby, and her vagina) could overrule Mark and Arizona’s diet choices for her. Snarky’s Machine: I can’t imagine why they would deny a surgeon - even a pregnant one - the substance they need to survive. Maybe that was one of the gambles Meredith was talking about! 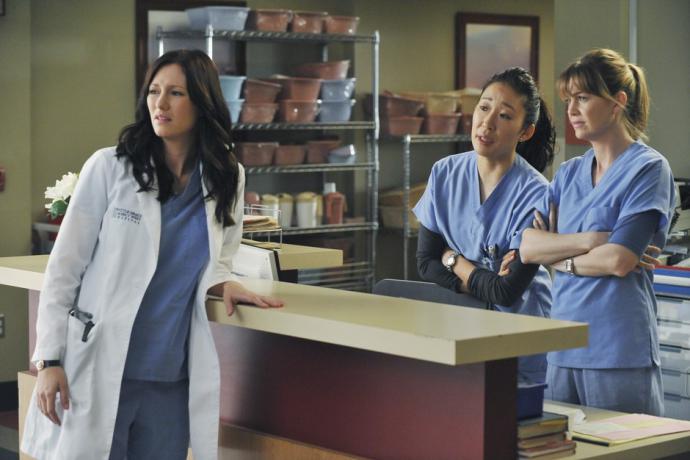 Tasha Fierce: Meredith and Lexie’s father shows up with kidney stones and a woman Lexie’s age on his arm. Lexie is outraged because of the age difference and dismisses her as a “mid-life crisis.” Are older man/younger woman pairings always the result of some mid-life crisis? How are older woman/younger man relationships treated differently? s.e. smith: Ugh, if Lexie had harped on Danni’s tattoos one more time, I would have reached through the screen and thrown a pie at her. I feel like older man/younger woman relations are, yeah, always depicted as mid-life crisis (which doesn’t mean they are), and younger woman/older man is often framed as ‘sad older woman who needs to bribe a boy to be her playtoy.’ As Lexie demonstrated, people tend to be quite judgmental about age differentials. It’s interesting coming from her, given that she’s just getting out of a relationship with an older man herself. Everett Maroon: I believe ABC already has a version of the older woman/younger man relationship, over on Cougartown. There was a lot of anger directed at the couple in this episode, as opposed to mockery, which is what I think happens more often when the woman is significantly older. Gasp within a comment at the woman in question outing them as AA members who met in group. I thought they weren’t supposed to do that! Redlami: I think this situation was less about older man/younger woman pairings than about Lexie’s inability to recognize that this is what Thatcher does when a woman leaves him: He starts over with someone new and abandons his connections to the old relationship. Meredith seemed to recognize this right away, having lived through it before. Snarky’s Machine: I thought this was another example of how Grey’s struggles when portraying relationships the characters find odd. While it’s true that Lexie would have that kind of response, the classism made it pretty difficult to care about her feelings on the topic. I was kind of stunned that Meredith’s lecture wasn’t more of a smackdown. Tasha Fierce: Do I detect a romance brewing between Avery and Lexie? Discuss! s.e. smith: Hrm, could be! There were some sparks in the changing room, that’s for sure. It would be awfully nice to see Lexie not running back to Sloane. Everett Maroon: You may detect it, but Shonda herself went out on Twitter last night saying we all need to hang in there for Mark and Lexie, so I’m betting whatever amore she shares with Avery will be short-lived. Redlami: It’s hard to tell whether Jackson is being opportunistic or is actually developing some feelings based on what Lexie shared after he plied her with sweets. In either case I don’t think it will end well, as Lexie is sure to find out eventually that Jackson was running recon for Mark. Snarky’s Machine: Finally! 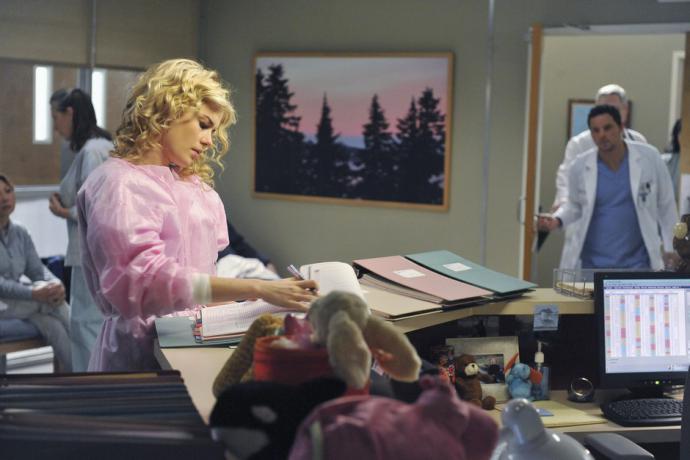 We’ll be back next week with “Golden Hour”! About your bloggers: Snarky’s Machine is the founder of the pop culture site I Fry Mine in Butter. Everett Maroon is a Seattle-based writer, focusing on popular culture commentary, speculative fiction, and memoir. His interests include the interrelationships of characters on Grey’s Anatomy, Dr. Bailey, behind-the-scenes politics, and Dr. Bailey. Tasha Fierce blogs about politics, fashion and whatever she wants at Red Vinyl Shoes. s.e. smith is a cantankerous, cat-wearing, pop culture-loving, pants-eschewing philistine from the wilds of Northern California with a compendium of largely useless random knowledge and a typewriter that doesn’t know when to quit. smith writes at this ain’t livin’. Redlami turns numbers into stories and is the resident tech geek at I Fry Mine in Butter.

1) Cougartown has completely changed Everett Maroon. She is 42 and her boyfriend is 40. Not much cougar hunts happening on that show anymore. Plus it's great. 2) AA members aren't supposed to tell who is in the group to outsiders. Most family members know if you yourself are in AA AND if they had been dating that long, I am sure the couple (Dani and Thatcher) discussed telling Lexie and Meredith that they met in AA 3) You are all right about the lack of actual gambling occurring.

Thanks for the clarification, Lang!