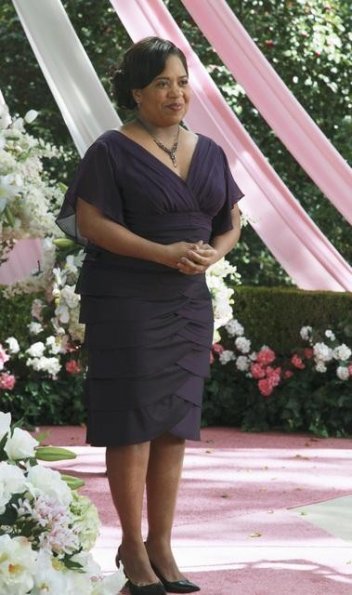 Snarky’s Machine: Fluff first: What did you think of the wedding dresses? Was confused by Callie’s sleeves, but overall thought they both looked wonderful. Redlami: Callie had the more traditional dress, complete with the veil which I don’t think was selected just to mollify her mom. This made sense to me, since Callie said she’s always dreamed of being a bride. Arizona’s dress was a bit more modern but I agree both were tasteful and gorgeous. s.e. smith: I liked the flowers in Arizona’s hair. Everett Maroon: I liked the dress, and apparently Grey’s was onto something, because I just went to a lesbian commitment ceremony in Seattle last weekend, and one of the brides had that dress on! Just in blue. And Callie’s hair looked really good the whole episode, if I may mention that. Snarky’s Machine: Privilege fail seemed to be the name of the game in this episode. Even Bailey managed to erase the real concerns of folks who are unable to legally marry in a cloud of well-meaning woo woo. What did you think of how the marriage equality was explored on this episode? What do you think the purpose of juxtaposing Callie and Arizona’s wedding versus Meredith and Derek’s rush job at city hall? Redlami: When Bailey popped in to deliver the mind-changing monologue I thought for a moment I was watching a David E. Kelly show. I understood the message to be that MerDer’s legal marriage between a man and woman, done in haste without wedding dresses or rings or lots of friends, was actually less traditional in many ways than Callie and Arizona’s gay marriage. That marriage comes in all kinds of shapes and sizes, just like people. The two brides atop the wedding cake was a nice, if overused, touch. s.e. smith: I think that a lot of folks want to position themselves as “allies” by focusing on support for marriage equality, like this is the only thing that matters to LGBetc folks, and this episode really reminded me of privileged self-flagellation at its finest. Wake me up when you’re done Making Statements, Grey’s, and you’re reading to talk about issues like homeless queer youth or the rape of trans women. Everett Maroon: So they’re in some rush to do adoption paperwork and they just have to take that moment to go to city hall? That’s pretty shitty in my book. Plus, people never get a same-day appointment to get hitched, so I don’t buy it, and I don’t buy the yawning delivery of the judge. In all of the shit things that justices of the peace have to go through, the marriage stuff is generally a high point, so I think they’re a bit off the mark on that exchange. But hey, nice way for Derek to squeak in and get half ownership of Meredith’s house, since Washington is a common property state. I only bring this up because I think it’s a strange erasure—at the same time we’re focusing on the right to get married in terms of how important it feels for the people involved, we really missed out on considering some of the ramifications, legal and otherwise. The whole marriage thing felt rushed to me, especially as it’s only been what, three episodes since Arizona even proposed? 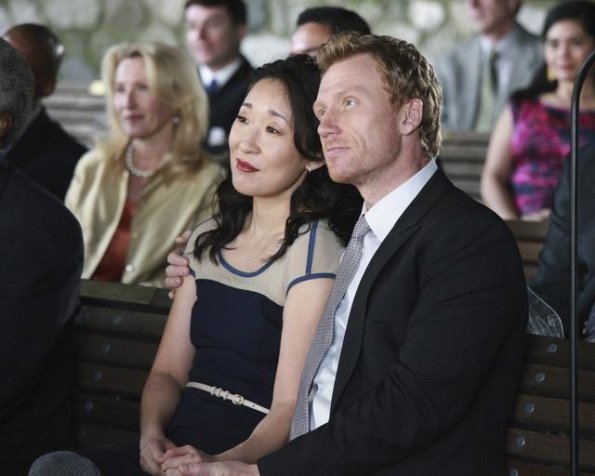 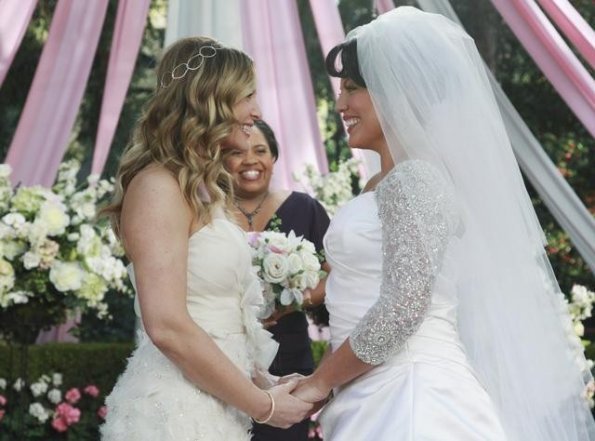 See you next week with “I Will Survive”! About your bloggers: Snarky’s Machine is the founder of the pop culture site I Fry Mine in Butter. Everett Maroon is a Seattle-based writer, focusing on popular culture commentary, speculative fiction, and memoir. His interests include the interrelationships of characters on Grey’s Anatomy, Dr. Bailey, behind-the-scenes politics, and Dr. Bailey. s.e. smith is a cantankerous, cat-wearing, pop culture-loving, pants-eschewing philistine from the wilds of Northern California with a compendium of largely useless random knowledge and a typewriter that doesn’t know when to quit. smith writes at this ain’t livin’. Redlami turns numbers into stories and is the resident tech geek at I Fry Mine in Butter.

I took the juxtaposition of the two weddings to be a way of highlighting straight privilege: Derek and Meredith don't really want to do it and treat it as just a formality, since their post-it is the real thing to them; it is a means to an end in the adoption procedure. By contrast, the scenes with Callie and her mother make clear that even though Callie and Arizona really want to get married, there is a lot of heartbreak involved and, despite Bailey's efforts (and I agree with Snarky's Machine here), what they get is a ceremony that is, yes, lovely, but does not involve some important people Callie wanted there: her mother and a minister/priest to go with the mother. I also didn't get whether, in the GA universe, Callie and Arizona's wedding will be legally valid in the way that Meredith and Derek's will be.
I discovered this periodic discussion of the show quite recently, but I enjoy reading it, thanks! 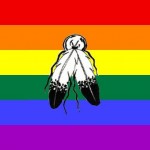