The Grassroots Media Justice Tour is starting soon and might just be coming to your town. Check it out and spread the word! Bitch is proud to be a sponsor. In fact I was supposed to participate on the tour, but... well, as you all know, we need all hands on deck to sustain our beloved organization. I'm there in spirit...

The tour has two primary functions; First, to get information out - to communicate about current struggles for justice and liberation, from criminal justice organizing in Jena to sex worker activism, from resistance to imperialism in Iraq and Latin America to resistance to school privatization, from immigration rights movements to post-Katrina organizing in public housing.

The tour also seeks to connect communities of resistance, and to build relationships between grassroots activists and independent media.

Participants:
Most presenters on the tour come from communities traditionally underrepresented in corporate media.

Hosts:
The tour will include areas often ignored by the media, with less of an emphasis on the coasts, and with a special effort to reach out to community colleges and historically Black colleges and universities.

Sponsored by Left Turn Magazine, ColorLines Magazine, Bitch Magazine, $pread Magazine, Free Speech Radio News, Make/Shift, and other radical and independent media projects from around the US, the Grassroots Media Justice Tour is an exciting movement-building opportunity. Beginning in Fall of 2008, the tour will bring performances, workshops, and inspiration to frequently underserved and underfunded areas of the country, beginning in the South and Midwest. 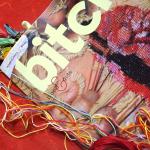 by Andi Zeisler
It's been almost 20 years since we started Bitch. I'm as proud to help lead this organization as I was when we printed the first issue of the magazine and distributed it out of the back of a Toyota Corona in 1996.