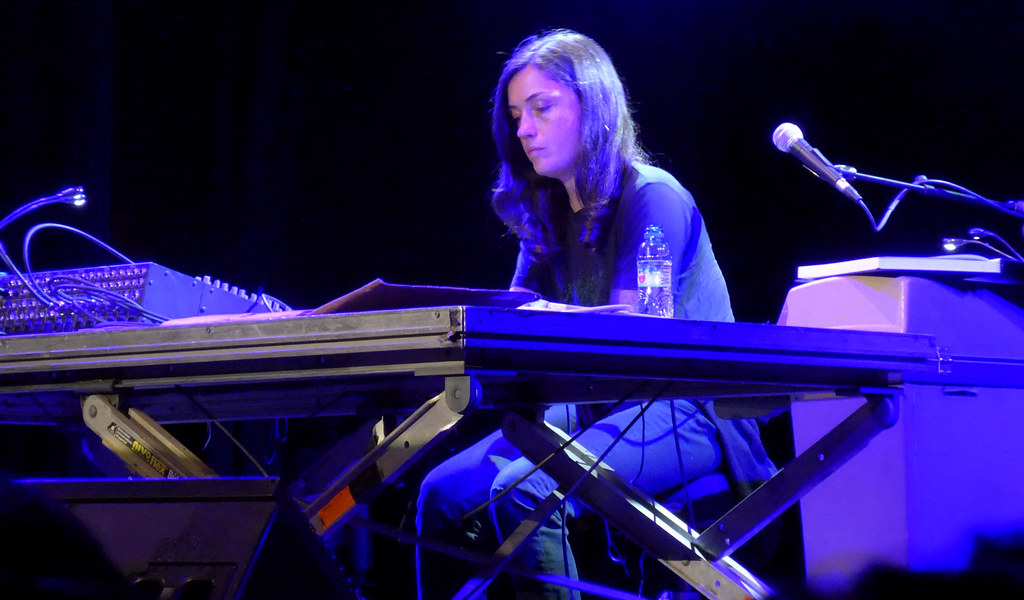 Liz Harris has made 10 albums of ethereal electronic music. Photo by Denis Denis.

Under the pseudonym of Grouper, musician Liz Harris creates mysterious, multi-layered sonic landscapes. On her 10th studio album, Ruins (which debuted on Kranky Records at the end of October), Harris’ voice floats delicately above a mass of sounds: twinkling piano notes and low-octave synth drone and swarm like a hive of busy bees

Grouper’s style is fairly minimal, with acoustic guitar, piano, and her own vocals at the base. An organ might bellow beside delicate piano keys as a thick foggy layer of vocals shifts in and out, all beneath a slight buzz and reverb. Each of Grouper’s ten albums is immersive, expansive, and meditative in its own way  and many consider her one of the best ambient artists of the past decade.

In late 2011, a friend who gave me a mix with early Grimes, Juliana Barwick, and Grouper, all pretty formative figures in my electronic and ambient music taste. I quickly became obsessed with her two-part album A I A: Dream Loss and Alien Observer. Grouper became the music I listen to on rainy days when I need to lay in bed and disconnect for a while. Her emotional, earthy vocals ground the ethereal albums—ambient music can often feel distant or unemotional, but Grouper is anything but that.

I had the chance to see Grouper live at Reed College’s Elliot Hall Chapel in early 2013. Since she lives on the Oregon coast, Grouper has a big following in Portland’s music scene and the chapel was packed—standing room only. The room was cavernous, with beautiful exposed beams. Harris stood at the altar with a film projector set-up and began her show with just a guitar and a tape loop pedal mixer. It felt like an odd ceremony as Harris sang gauzy lyrics to video footage of ocean tides washing in and out behind her. The show felt transformative.

On Ruins, Grouper continues to create engaging soundscapes. However, this album is different and defined by refreshing simplicity. Harris recorded the album in its entirety during her time doing an artist residency in Aljezur, Portugal, near a nature preserve. The sense of place is palpable on Ruins. Harris says that the album came from her time spent taking a daily walk.

“When I wasn’t recording songs I was hiking several miles to the beach. The path wound through the ruins of several old estates and a small village. The album is a document. A nod to that daily walk. Failed structures. Living in the remains of love. I left the songs the way they came (microwave beep from when power went out after a storm); I hope that the album bears some resemblance to the place that I was in.”

Sounds of nature run through the album. The song “Made of Metal” starts us off with frogs croaking and birds chirping, setting the scene for the vocal melodies that follow. On “Clearing,” Harris’ voice lingers between the piano chords, but this is the most audible she’s ever been. The song is pretty shattering, and shook me into remembering my own heartache as Harris sings, “Every time I see you/ I have to pretend I don’t.” Rather than looping sounds, Harris complicates the scene with her own voice, which is more or less audible at any given moment.  “Holding” is a testament to the beauty of simple, unadorned music. The piano melody is understated and you hear wood creak as Harris whispers about “the morning when the sadness comes.” There is something oddly warm about this sadness, it feels familiar and begs you to lean into the vocals’ pull. What impresses me is the evocative, lingering quality of Harris’ voice. The vocals never overwhelm the instrumentals, everything is in balance. On tracks without vocals, Harris sustains most notes and any seemingly straightforward melody becomes shrouded in echo.

This is quiet, completely disarming music. I suggest listening to this album alone, maybe in the dark, on very good headphones or speakers so you don’t miss any details. Though this is a bit different from the Grouper I’ve come to love, I think this may be my favorite album in her catalogue. Every moving part of this album feels deliberate and elegant, from wood creaking to the accidental microwave beep on “Labyrinth.” I cannot stress enough how artful this music is, and how it may perhaps be a nice introduction for any ambient music novice or a pleasant surprise for any steadfast Grouper fan.

Not to be a pedant, but labeling Grouper an electronic musician when the core of the album (and her previous work) is piano, acoustic guitar and voice is a little misleading. Ambient does not necessarily mean electronic, and Grouper's work is in a different sphere to ambient musicians like Eno or Boards of Canada.
Phenomenal album though, my 8 week old daughter loves it. Glad to see Harris is getting more press.

WOW! What an awesome surprise! I love reading your stuff, keep rocking!!!