Guy Who Wore a “Pregnancy Suit” Expects Us to be Impressed. Sorry, Dude. | Bitch Media

Guy Who Wore a “Pregnancy Suit” Expects Us to be Impressed. Sorry, Dude.

Last week, novelist Benjamin Percy was interviewed on the TODAY show about his experience of being “man pregnant.” Percy wore a Japanese-engineered pregnancy suit for nine weeks in an effort to be a better father by gaining an understanding of what women go through when they’re pregnant.  When I saw the story (and the smug interview), I was uneasy. Not only was the interview tediously unfunnny, Percy’s pregnancy suit struck me as a rude, half-baked attempt to figure out what the hell women have been complaining about since the beginning of time. But Percy’s story, originally written for GQ’s humor section, isn’t the first “dude tries to approximate pregnancy” experiment we’ve seen lately.

A few months ago, Dutch TV hosts Dennis Storm and Valerio Zeno made news when they hooked themselves up to electrodes in an effort to experience “the worst pain there is”: giving birth. Their two-hour simulation left them cursing, screaming, and saying it was “torture.”

I appreciate that these guys are aiming for empathy. Percy’s experiment and that of Dennis Storm and Valerio Zeno show that men are considerably more sensitive to women’s experiences than previous generations. That’s a good thing. I mean, can you imagine your grandfather willingly undergoing a birth simulation? I sure can’t. Still, I can’t shake off the clinging sense of resentment and weirdness I’m feeling about the experiments. The media stunts reinforce dual perceptions of pregnancy in our culture: as a horrible, painful biological process and as something special that must be protected and put on a pedestal.

Obviously, Percy’s experience with the pregnancy suit is only a small part of the actual condition of being pregnant. There’s a myriad of other physical symptoms he didn’t deal with, from nausea and sleeplessness to swelling, heartburn, and increased urination—to name just a few. Not to mention the mental and emotional impact of pregnancy, having to think doubly hard about everything you eat, drink or do. Oh, and the teeny tiny consideration of actually getting the baby out of your body. Let’s also not forget the fact that each woman’s body experiences being pregnant in different ways, and that a pregnancy changes your body over time: it’s not just one stagnant weight, one big unchanging belly.

Percy briefly touched on the infuriatingly-common policing of pregnant women’s bodies, writing of his memories of his wife’s actual pregnancy: “When you’re pregnant, you become public property.” But it’s important to keep in mind that the pregnancy suit he wore made him a topic of public interest because he looked strange, not because everyone and their mother think they have the right to touch and talk to a pregnant woman  (“Wow, you’re so big you look like you’re having twins! “I hope you’re going to breastfeed.” “Let me tell you about my friend’s induction….”)

The pregnancy suit GQ article purports to come out of a desire to both become a better father and to beget an understanding of pregnancy. But he writes of how surprised he was at the negative reactions the suit garnered from women he encountered: He expected to get a “pat on the back” for his efforts. Call me crazy, but that expectation doesn’t seem like it’s coming out of any real desire to empathize. When he was interviewed on the Today show, the host seemed to have a better understanding as to why women took issue with the suit. Benjamin Percy’s humor fell flat when he told the leery-looking host he did it to “make up for my mouth-breathing, hairy-chested, caveman deficiencies.” Surprise, surprise—Percy has no future plans to spend any more time in the pregnancy suit.

Percy also told the show that wearing the pregnancy suit proved to him that he’s not “man enough to be a woman.” Yikes. Way to cancel out your apparently good intentions. Ultimately, gimmicky stunts like this one and the labor simulation by the Dutch TV show hosts only prove that simulation of pregnancy and birth experiences just serve to provide a man with a story to tell—a man’s story that doesn’t bring anyone, not even the men themselves, closer to empathy. 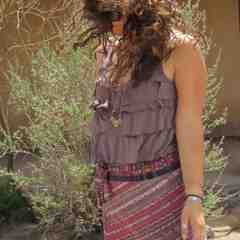 I think this is a really good example of a privileged person thinking he has to validate the experiences of a minority. Rather than accepting stories of pregnant individuals that yes, carrying and giving birth to a child is a difficult process, he had to experience it for himself, seemingly to give the claim validity.

It's the same story played out over and over; a white woman wears a hijab to experience islamophobia, a wealthy white man lives on minimum wage for a month, and here we have men simulating pregnancy and birth in an effort to validate the stories of others. I do appreciate that they tried, but isn't it enough to listen to and believe the stories of minority groups?

I just needed to say one thing: Preach.

Well said. What also bugs me about stunts like this is, they suggest that we can't possibly comprehend another person's emotions to even the smallest extent without experiencing the same thing (or something similar) ourselves. That's a really limited understanding of empathy. Any person with some imagination can understand why others might feel the way they do. I've never lost a parent, for example, but when friends of mine have lost a mom or dad, I am capable of imagining what that might feel like and to have compassion for them.

If a man is around a woman as her body changes throughout a pregnancy, birth, and all that comes after that--which the pregnancy suit guy has!--and can't fathom why it's difficult and intensely emotional, he's an idiot. But then again, as a culture, we tend to talk about men as if they ARE emotionally stunted idiots; if you CAN comprehend why a woman feels the way she does about something happening to her body...dude, are you, like, gay or something? Gag.

It does not have to be this way. And we do not need stupid experiments with labor pains and pregnancy suits to change that. Compassion has no gender.

Also, let's just look at the term "man pregnant" for a second. Do we need to have a "woman sweaty balls" or "woman erection in public during unfortunate times" experiment in order to understand what men go through? No, because women don't need to experience what men go through in their daily lives, just like I don't need to experience what a deep-sea diver or a tow-truck driver or a dental hygienist experiences daily in order to empathize, validate emotions, and offer support when asked for it.

And, while I'm not surprised, the depth of the ciscentric, gender-conforming point-of-view within this scenario really concerns me. So much privilege is taking place here.

I just wanted to point out that some of us women do have those above stated "men" experiences. But ultimately i agree with you and like that you point to the ciscentricity of the situation.

He should have told people he was single or considering having an abortion: Get the "First Hand experience" in being haggled by the Pro-Life idiots..
I'm more concerned about the suit: What the fuck?!
How did he even find the right people in Japan to construct a High-Tech pregnancy suit for some half assed experiment? Couldn't the money/technology better serve {oh, I dunno} creating a fully efficient, healthy measure of contraception?!
Do they just sell these things on a Tokyo street corner to every bumbling American tourist or something?

i'd like to think this is satiric, but I'm not sure it is. It's very possible the writer is just a sexist caveman who can't write:

This thing is big. Its Cummins turbodiesel -- normally relegated to commercial rigs -- has 610 pound-feet of torque and can tow 16,900 pounds. Look at it -- a civilian tank waxed to a sexy gleam -- and you think of Arnold firing assault rifles.

Before climbing in, I cop a feel, run my hands along her tow hooks, mount her eight-foot bed, peer under her running boards as if they were a skirt.

When I start her up, she lets out a sharp snarl that settles into a steady growl. I mash the gas, expecting a slow moaning acceleration, but this pickup has pickup. Within a few seconds, I'm gunning along at eighty, scaring cars to the side of the road, throwing up rooster tails of slush and mud. I pick up my buddy Jeremy, who shakes his head at the sight of the Ram and whistles, "That's one big truck." I feel a ridiculous sort of pride, as if we're in the locker room.

roseline
england
even since i was 25 i have been
sick of dyspnea there is no medical
attention i have not taking hevery
week i do go to hospital i use to
buy montelukast and then evterytime
one hour after meal i take
phenoxymethylpenicillin i have been living
like this for years until my year of restoration
came this was on june 20th 2014 i met dr
akpoba i did not see him face to face but
i read some testimonies about him and then
i contacted him for help with tear i couldn't
for mail i called him i explained everything about
me to him and he prayed for me encourage me talked
some sense into me just in that mood i fell inlove
with him because i already notice that my time is now
after contact his oracle he told me what to do for the
spell and i did 12 hrs later he called me on my phone
and told me that the spell has been casted that there
is no problem at all and that everything i ha ve using
both the drugs i should threw them alway at first i was
afraid because the things involve really cost a lot of
money but because i trust him and i did after then i called
he just said my daughter it is all over now all your sorrows
are gone just then i don't really know what to do i wanted to
see things for myself i bought cigarret i was told not to smoke
at the hospital but to be very sure i smoked first i took one
i finish that one finish another nothing bad happen that was how
i screamed i am healed til now i have not be going to the hospital
i smoke the way i use to and i am completely healed i promise him that
everybody in holland is going to hear about his good hand work so dear
akpoba is the man the physical and spirtual dr you need don't go looking
for another contact him he is here for you send your mail and your telling
your problems to him at akpobaspell@gmail.com or call +2347055484719 and
i promise you that you will be a happy ending person once again thank you sir