Hardee's: No One Wants You to Dip Your Balls in It | Bitch Media

Hardee's: No One Wants You to Dip Your Balls in It

When Hardee’s (known to us West Coast-ers as Carl’s Jr.) launched a new dessert last month and called it biscuit holes, no one was shocked that the product inspired yet another offensive ad campaign. After all, Hardee’s has made a name for itself by shilling gross food with even grosser commercials (usually complete with a bikini-clad woman covered in ketchup). However, apparently this most recent campaign-o’-unbelievable-bad-taste has gone too far for Hardee’s largest franchisee. But why on earth could that be?

Creamy sweet holes? Hole munchers? Hmmm… Could these phrases be construed as somewhat sexual? (Yes.) Of course, it’s interesting that the franchisee that is calling for a ban on the Name Our Holes campaign didn’t bat an eyelash when Paris Hilton lathered up her breasts in the name of the Spicy BBQ Burger. Remember this?

Yeah, apparently that type of ad is A-OK, but the biscuit holes are totally off-limits. Now, no one in their right mind would defend this Name Our Holes campaign, with its so-wrong-it’s-right ad copy, but it does seem a bit strange that the franchisees would put their fast-food loving feet down now of all times. Could it be that the holes campaign conjures up images of more taboo sex? You know, like sex that involves orifices otherwise known as A-holes? 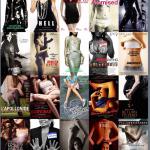 by Natalie Baker
“It’s a truly amazing time to be a headless female body part in Hollywood!”