Fed up with catcalls, street harassment awareness group Hollaback Philly has raised $7,000 to write, draw, and print a comic book about how all those daily “hey, good lookin”s add up to a major problem.

Creator Erin Filson wrote and illustrated the book that follows three main characters, each of whom has their own color that’s used only on their pages of the story. Two girls who get harassed are red and yellow, and the comic also follows a boy in blue who learns how to be a proactive bystander. Hollaback is printing 2,000 copies of the comic which you can buy here and will also be sold at San Diego’s Comic-Con in 2014.

“The significance of an all-female crew creating a comic book featuring women’s issues and realities is magnified when the comic is then used to break down the glass ceiling of the boys’ club of the comic and gaming worlds,” says Hollaback Philly’s media coordinator Anna Kegler, who has been advising on the project along with Hollaback organizer Rochelle Keyhan. “There have been lots of issues with harassment at comic cons.”

Check out two final pages from the comic as well as an in-progress page below. Cuz what we need to end street harassment is another group of arty white girls demonizing men of color and stereotyping women of color. Not cute.

Could you explain what you mean by that? In the second comic, it looks like the blue guy who is a man of color, isn't joining in and regrets speaking up, which could eventually lead to him speaking up. And when you say it's stereotyping women of color, what do you mean by that? Are you saying that most women of color would stand up and speak up for themselves instead of walking by two guys calling out to her and just silently ignoring them? Also, the red girl looks like she might not be of color, but does that really matter? Just trying to understand your perspective.

Either way, I think it's good to bring awareness of these issues, because I've been catcalled and made to fear walking around the streets of New York, and regardless of whether I am considered "of color" or not, regardless of being Asian, regardless of even being a girl, I DO NOT appreciate being spoken to that way and made to feel threatened or endangered by anyone.

Also, forget just streets of New York. This has happened to me in multiple places, in my hometown city included, which is near New York, and it's not okay.

Ditto. Experience this all the time in Edinburgh, Scotland!

Also, what do you think WOULD work to end street harassment? Because I don't think there's any one answer, and it'd be great to hear other ideas.

I'm a man of color and I don't feel demonized. I know what its like for someone to look at me and just see my race, so I understand what someone feels like when someone looks at them and only sees their gender. Stay focused on the issue this comic book is trying to raise - instead of dissing the people who have made this effort. I think they've been very conscious to not perpetuate stereotypes. If you read the book, you'll see. 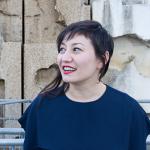