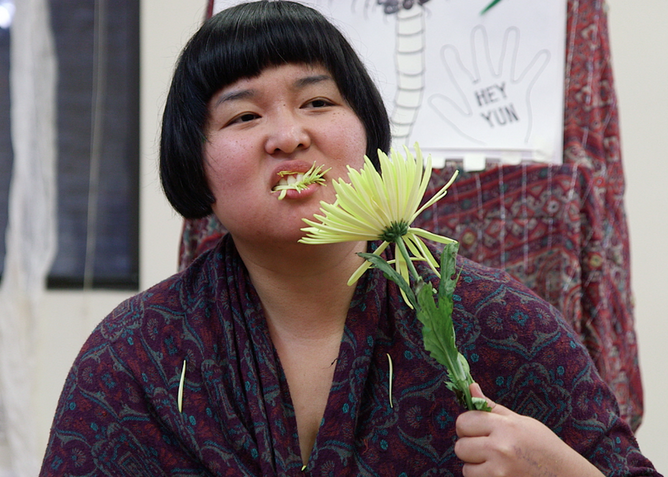 Hye Yun Park is real. She’s three-dimensional—smart, funny, confused, angry—and she writes, directs, and stars in her own web series, Hey Yun.  The series follows a fictional Hye Yun (the title of the series flips the first two letters of her first name, which is pronounced, as she told me, “Hye Yun, rhymes with ‘hey fun’”) as a struggling artist in NYC. The show is a nuanced look into her experiences and deals with race, gender, and juggling a “survival job” while pursuing one’s passion. It's a great series—even Janet Mock is obsessed with the show.

Park talked to us about playing a fictional version of herself, sitting with her Korean parents when they watched her show for the first time, and how she discusses depression in her work.

AMY LAM: You’ve described your show as a comedy about an “angry, whimsical, and ambitious Korean woman.” After I watching your show, I felt like your description was actually really accurate. How did you decide to use those specific words to describe your show?

HYE YUN: “Angry” and “whimsical” came out of just of thinking of ways to describe my sensibilities. My anger and frustration about things often drive me to make a statement or make something out of it. The “whimsical” comes from feeling the most free when I give myself permission to be like a kid. “Whimsical” is a better than saying “childlike” or “immature.” “Ambitious” came about because when I was trying to develop season two, even in my real life, I was trying to become more ambitious in my career and as an artist. I was trying to embrace it and I wanted to bring that side of my real life into it.

I had read somewhere that the reason you changed the title of the show to “Hey Yun” to be  a different spelling to your actual name is to signify that the show isn't autobiographical.

I was joking, because a lot of it is autobiographical. The first reason is, because of the way it's spelled, people often mispronounce it. So one reason was for practicality, so if it's Hey Yun, it’s easier to pronounce. Also swapping out the letters gave me a little more protection, in a way, that this is not a documentary. It is fiction.

With season two, I felt it exaggerated my own ambition. But just the notion of making a documentary of my own life is something I would never do. But under the mask of the fictional character, Hey Yun, I was able to go out all out on that.

What are some things that fictional you are able to do?

In the first episode [of the second season], when the shaman called me “fat,” I think the real me, even if I didn't feel like, would thank him for the advice and try to pretend like I can totally take it. But in the episode, I was able to turn really mean and kick him out of there.

The clown performance was really interesting. We filmed me doing a live show at a this burlesque event. It was hard, a little tight-rope. It is a part of me, but it's a clown version of me. It gave me more permission to be more fearless about it.

I do have a funny story about the clown episode. My parents are in Korea and they're pretty conservative. They've become more supportive of my path, but they're not quite there yet. They know to not watch my stuff. I was visiting Korea a couple weeks after I launched season two for my brother's wedding. Long story short, I met my brother's in-laws and it prompted them to Google me and watch that clown episode. It got around to my parents attention and I had to watch it with my mom. 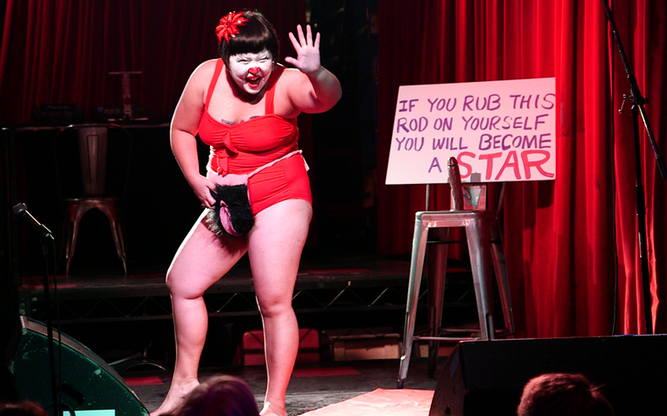 It was horrifying. [Laughs] They were so upset. It was a whole, silly naked clown scandal that I caused in Korea. In hindsight, it was hilarious. And I have a friend who joked that this would be a cool way to open season three.

Of all the episodes to be an entry point to your show, the clown episode is the weirdest way to get into your show.

Yes, completely. There's this stereotype, and it's true in many cases of Asian American parents, of not being so supportive of their children's artistic paths. And this situation was stretched all the ways to the extreme where they literally have to watch their daughter simulate sex onstage as a half-naked clown.

Yes. I had to really take care of my mom. She was viscerally feeling ill from watching it. [Laughs]

In terms of your family background, did your parents used to live in the States and they moved back to Korea?

I grew up moving back and forth a lot. I spent most of my childhood in Korea. But we were in Maryland for my first and second grade, and middle school. My parents were here as immigrants and about five years ago they relocated back to the Motherland.

It must have been really bizarre to see their daughter doing this. And you're like, “This is my work. This is my job.”

They keep thinking I’m acting out from rebellion. They're saying that I'm too old to have teenage rebellious angst. It's my work and it's the way that I express myself. In a way, I'm glad it happened that they saw my show.

Your show is so interesting because it runs the gamut of the human experience. From “Calling Card” where you're rehearsing the show you want to put on, a very specific type of show, like an off-Broadway production—

More like off-off-off-off-Broadway in some basement of a bar. [Laughs]

—and the clown episode we were just talking about is like another realm. And then there are some down-to-earth, real-talk episodes like “Mercy” and “Sisters.” How do you decide what kinds of topics your show will cover?

In season two, under the guise of Hey Yun's rise to success and ambition, I was actually able to share my bundles of shame. Shame of being fat, depressed, working a crappy survival job, not living a grown-up, responsible lifestyle. Shame around the joy I feel about being vulgar and crass with my sexuality at times. Being able to share my dark sides fully with hilarity was the best thing ever.

When I conceive of something, the starting point is never like, “Oh, I want to make a point about racism or sexism.” It starts with just personal stories that stick with me. It starts with experiences that I have a hard time shaking off from anger from it and I make it into a story. And often times I make it into hilarious stories. Finding the hilarity in darkness or uncomfortable pain helps me to overcome it.

For example, with the “Mercy” episode, I'm not a mother and I've never given birth. But that was more of a personal story for me, because I was speaking out about my struggles with depression through that episode. It was really satisfying to tell my own personal secret story and parallel it with post-partum depression. I had a lot of new mothers respond to it, thanking me for the episode and talking about how it was so hard to be open about the dark parts of motherhood because people don’t really talk about it. There’s always focus about the wonders and amazing joys of motherhood. It was cool to have this thread on Facebook about their crazy hallucinations or feeling like they were losing it the first year with the baby. Just to give them that space to talk about it was cool.

That episode was really intense. It started off really light-hearted, with you and a friend chatting because you thought that she was trying to hire you to be a nanny. When I watched it, I definitely thought it was only about post-partum depression. But to hear now that it was more an exercise to talk about your own depression, it's interesting to learn that you were able to funnel toward talking about another issue of depression as well.

I've had my spurts of being obsessed with suicidal impulses and stuff. And I knew that these are feelings that I have and I'll never actually have the guts to do it. I used to fantasize about having a friend do it for me, in a pleasant, safe way. That was the basic thought.

And I've had close friends become new mothers and observing them struggle through it was also an inspiration for it.

I really loved the first episode of first season with the casual racism. People think that micro-aggressions are benign when they're not.

Everybody has blind spots, even if they're not homophobic or racist. Progress can be made when we can own up to it instead of being defensive about it. But that episode was something that actually happened to me. I was at a brunch gathering and a boyfriend of a friend called me an au pair. In real life, how it panned out was that I didn't even know what au pair meant. This is where my upbringing of mostly growing up in Korea comes out. I honestly thought he called me a “Korean old pal.” And I thought, “That's a weird thing to say. Okay, I'll take it.” When they left, my friend said, “That was weird that he called you that.” And I was looking it up on Wikipedia and it was something that stuck with me. Add I wanted to talk to that person and talk through it and express how I felt.

It stuck with me. That whole fantasizing of somebody standing up for me was a fantasy version of that situation.

It was so good. There was a food fight in the middle of it. I need to have a food fight whenever there is casual “benign” racism happening. I just want to throw a pie in someone's face.

HYE YUN: It was therapeutic to make it happen. 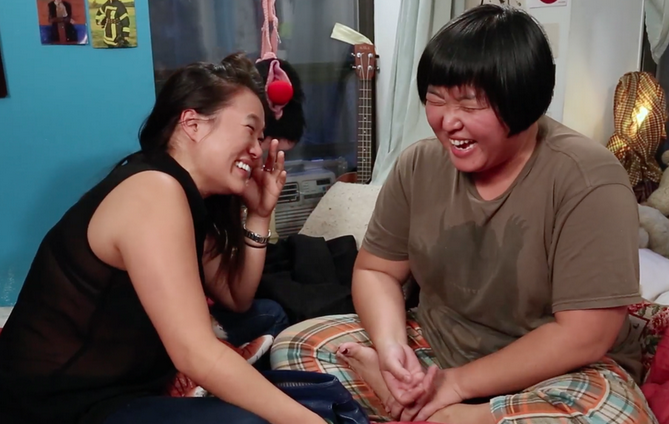 In season two, the “Sisters” episode was something I'd never seen. Two Asian women being so real onscreen. I saw that episode and I wanted it to be a series on its own. Just you and Diana Oh, who I thought was your actual sister, because your rapport is so good.

I did get a kick out of doing that. One of my goals and plans is to get a show with Asian American women on the forefront. Diana Oh is also an amazing artist, actor, singer/songwriter. The song that comes on at the end credits is actually one of her songs. We connected last year and it was meant to be. I knew that we would have good chemistry because of the friendship we have.

In the show, we're not somebody's friend. It felt really empowering to do that.

In the episode, you're trying to tell your sister that you're kind of depressed. You end up crying and it felt so real and my heart broke for you. But then there are parts where you are cracking up. I loved it because this is real life. And to see two Asian women doing this, I need a whole series of this on HBO! I want to see you two up there navigating your lives in New York City.

Thank you for saying that. It means a lot. I'm just going to keep pushing out the show and sharing it. I'm just flabbergasted when people connect to it.

Related Reading: New Web Series “You're So Talented” Gives Us a Black Female Protagonist to Root For