It’s a tale as old as…well, the modern action movie. Boy meets girl, boy and girl kick some ass together, boy delivers snarky line that elicits an audience laugh, girl stares at boy like he just announced that maybe the bad guys were right all along. Sound familiar? While contemporary action heroines often have a sparkling arsenal of skills, humor—that most pointed weapon—is frequently left out of the mix.

I felt this absence particularly in this summer’s booming blockbuster Guardians of the Galaxy, which features Zoe Saldana as Gamora, a tough-as-nails assassin who responds to her fellow Guardians’ jokes with eye roles and stern requests that they get down to business. But she’s hardly the only one. Humorless “strong female characters” abound, not only in Marvel’s canon, but in dozens of movies and television shows of similar bent.

While they have gotten bigger roles in recent films, female action heroines often are left playing the “straight man” to funny male leads. Jocular, swaggering, and always finding the dry humor in even the most dire of situations, these type of men have dominated action and adventure movies. Think of Star-Lord, Han Solo, Indiana Joneses (really, a lot of characters played by Harrison Ford), Tony Stark and at least a couple other male Avengers, or Spider-Man, that web-slinging jokester. Even gritty characters like Wolverine, as played by Hugh Jackman, have a colorful sense of timing and wit. It’s actually harder to think of a beloved male action hero who doesn’t fit this idea than one who’s a complete blank firing a gun.

For their female companions, however, humor seems to have taken a grand and permanent holiday. Our green-skinned Guardians of the Galaxy killer joins fellow Marvel women Maria Hill and Sharon Carter, who are both competent, ass-kicking S.H.I.E.LD. agents; Mystique from the X-Men; Trinity from The Matrix; Katniss from The Hunger Games; Pacific Rim’s Mako Mori; and, arguably, semi-Action Girl Princess Leia, in representing a prickly personage that lacks in humor and tends to get defensive about snide remarks rather than firing back. Katniss and Peeta: She’s tough, but he gets all the good jokes.

There are ample counter-examples, of course: Starbuck from Battlestar Galactica, the classically quippy Xena, the dry Zoe on Firefly, and, in another Joss Whedon creation, Buffy the Vampire Slayer, who flung one-liners and wooden stakes in equal measure. Generally, however, when film and TV writers manage to wring a tough female hero from Hollywood’s sexist narrative strains, she’s almost guaranteed to be a stone-faced sadsack, and almost never a charming fighter with wit to spare. So, why so stoic, women warriors, while male heroes get dashing jokes aplenty? And why does it matter?

It certainly comes down in part to the misplaced perception of strong women as humorless, an assertion so deep-rooted it’s become nearly inextricable from the word “feminist.” As long as feminism has existed, there have been accusations that we feminists lack any sense of levity. It would be easier to ignore such outlandish and obviously sexist claims, if only it weren’t so important to assert that, yes, we do have a sense of humor, and it is, by necessity, sharp.

Humorlessness is serious. Joking around, tossing back insults tit-for-tat, is a way to show strength of character. It’s why writers use it so often to beef up their tough males’ banter. Humor isn’t just an essential method of survival in a hostile world that’s out to blow you away in fifty different totally PG-13 rated ways, it denotes confidence and a command of the situation. If you can’t take it, and whip up some of your own, then you’re less powerful. You’re seen as more self-righteous, inflexible, and flat. It is this flatness of character, both in an inability to tell jokes, as well as an inability to be in on them, that Hollywood is content to use over and over in lieu of representing them as complete people. It’s hard to name a personality trait for Gamora, Trinity, and Mystique other than tough. They’re badasses, but they’re still one-dimensional. 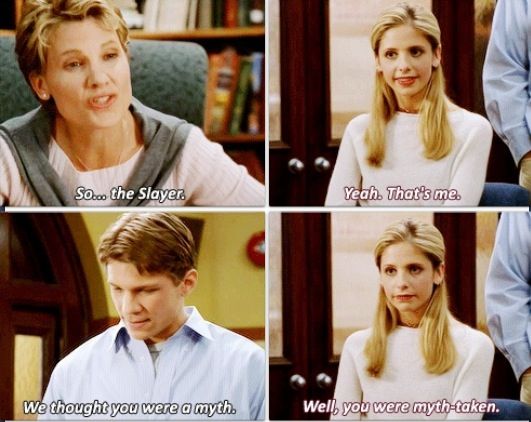 Buffy’s puns don’t always qualify as “funny,” but they show she has a sense of humor.

Lacking humor means lack something essential, something that makes a full picture of a human being. To not “get” or be able to produce a joke is to lack a full range of emotion, to fail to register social cues, or to lack the intellectual capacity required to successfully carry it off. Often, women who don’t laugh at offensive jokes in real life—like, say, the rape jokes—are dismissed as just being ol’ stick in the muds. We’re viewed as irrational and incomplete, refusing to keel over in hilarity as our life-or-death real world situation is made light of by brosef mansplainer at the bar over there, sipping on his Bud. It’s enough to make any self-respecting woman bunker down in her lady cave, mainlining reruns of everybody’s favorite warrior princess.

Most screenwriters, and the producers that control content, aren’t interested in tearing down tired notions and presenting us with complete, complex women to identify with. If a warrior woman has managed to squeeze through the editing cracks, it feels like a certainty that her role as a rounded, functioning person will be downplayed as much as possible. Yet, it is in these characters who do so much to further our society’s view of women’s place in action movies, beyond murdered wives and endangered girlfriends, that complexity is both strongly needed and clearly absent. When women are the doomed straight men, isolated from fun, forever grimacing behind their camo paint, the joke, it seems, is still on us.

Related Reading: ‘Tis the Season of Macho Summer Blockbusters, With No Superheroines in Sight.

Zoe Chevat is a writer, animator, and illustrator who attended the CalArts MFA Program in Film and Animation. In addition to writing for Bitch, she also contributes to TheMarySue.com. Follow her on Twitter @zchevat.

While I feel most of these examples are extremely relevant I'd just like to raise the point (and in doing so, I'm not defending anybody) that a lot of Gamora's straight man persona, and the eyerolls, stem from the fact that GOTG often uses culture shock as a point to make jokes from. But yes, the fact that she's so stern is still there and there are a million better ways she could have been written.

Meh. Honestly those are the characters relating to their comic counterparts, as far as Gamora and especially Maria Hill. Don't know why you added Agent 13 because there is no point in the movie where a joke is told and she is cold. Black Widow is actually the opposite of all you described and she's arguably the most reckognised female superhero out there. She has a great sense of humour.

Here are some strong female characters that don't allow disrespect or leave one-liners unanswered. I am sure there are others I don't recall right now.

Painkiller Jane:
Painkiller Jane is an American-Canadian science fiction and action television series based on the comic book character of the same name. Airing on the Sci Fi Channel (now SyFy) in the US and Global in Canada, it starred Kristanna Loken as the main character. Jane is a type of peace officer in a special program to deal with people that have abnormal abilities. She uses smiling wise-cracks, stage-whispers, taunting, complaining, and voice-over narration to express her frustrations and hide her ability which is less fun than everyone elses and requires her to chew painkillers to recover.

Farscape:
Claudia Black as Officer Aeryn Sun who starts out rule-book stiff, but loosens up in time. She uses humor in its many forms; cynical, ironic, disparaging, arrogance, and dooms-day, then warms to genuine happiness and even silliness. She and Ben Browder (Astronaut John Crichton) bounce jokes off of each other.

Gigi Edgely as Chiana; she asks impolite questions and jokes about people with "asides," snickers at people and freely offers comments and riddles.

Melissa Jaffer as the "witch" Utu-Noranti; she is like the crazy aunt that moves in and can do potion magic. She talks about people as if they aren't standing there, and rarely takes things seriously. Everybody else is the 'straight man' when she gets going.

Raelee Hill as Sikozu. Once she joins the crew, she hangs out with Chiana and follows her example.

In Plain Sight:
In Plain Sight is an American dramatic television series on USA Network. The series revolves around Mary Shannon (Mary McCormack), a Deputy United States Marshal attached to the Albuquerque, NM, office of (WITSEC), the Federal Witness Protection Program. Shannon must find ways to balance her professional life of protecting witnesses, her professional relationship with her partner, Marshall Mann, and her problematic personal life. Mary is cynical, ironic, disparaging, and makes snide comments when she isn't pulling stunts to show disapproval of individuals with an un-Mary attitude.

Traditionally, humor and wit have been considered masculine traits and abilities. Men make jokes and women laugh at them = traditional formula. As Christopher Hitchens (someone sexistly) explained, women don't need to be funny, men will want them anyway, but men work at getting a woman's attention by being funny. So I credit Joss Whedon doubly for his feminist portrayal of Buffy having wit and humore, and being a strong female lead.

Personally, even as a kid I thought Princess Leia had a few good sarcastic and witty moments. I remember that when she ends up having to rescue herself (plus the boys) when they botch her rescue operation, she said something snarky and Buffy-worthy,

Also, practically no one in the Matrix trilogy is funny. It is an uber-serious movie. In fact, the only character who seems to have somewhat sense of humor is the Oracle, who is a woman. If Trinity is a straight man type, well...so is Neo for sure!

One exception I thought of to the patriarchal tradition of humor as masculine was that in the French upper classes for several centuries, clever witicisms, wordplay, puns, etc. were the way for both men and women to be respected and "get ahead" - but that was because it showed a woman's intelligence, as well as amusing others, and was part of being seen as polished, refined, and ladylike. Very different from America's English roots. The movie "Wit" shows this exemplarly well.. But that was a sort of particular subculture in Western society. In general, female stand up comedians still tend to be masculinized - not a lot of girly-girl types in that industry yet, and still pretty much a male purvue. Look at how much resistance Lucille Ball faced - being told that beautiful women won't get laughs or have credibility in comedy. Luckily there are women are changing that, but it is a stubborn gendered norm that still gives women in comedy a hard time and leaves us with lots of roles written as humorless leading ladies, especially in action flicks. Thanks to the above commenters listing some funny women of sci-fi, I will have to check those out!! Especially Stargate and Farscape I've heard great things.