Hooray for "The Fosters," the Show About a Dynamic Family With Two Moms. | Bitch Media

Hooray for “The Fosters,” the Show About a Dynamic Family With Two Moms.

Women, and especially lesbian women, have historically not had the luxury of seeing ourselves portrayed realistically or positively on the small screen.  According to GLAAD’s annual study, only 40 percent of series regulars on scripted primetime broadcast television series were women, and only 3.9 percent of these same series regulars were gay, lesbian, or bisexual characters.

One of the few shows that puts lesbian characters front and center is ABC Family Channel drama The Fosters, which centers around the family lives of Lena (Sherri Saum) and Stef (Teri Polo), a lesbian couple with five children. This month, The Fosters was renewed for its third season. I, for one, rejoiced at the news.

Far too often on TV, lesbian characters are over-the-top sexy, one-dimensional characters who are just used as plot devices to garner viewer attention. Instead of having their sexuality normalized, it is used as a fashionable commodity that is an “add on” to an otherwise entirely or almost entirely heterosexual cast.  Take Two and a Half Men, for example. On that show, Charlie Harper’s daughter Jenny (Amber Tamblyn) is a lesbian who shows up out of nowhere in Season 11 and is on-screen for a few minutes per episode talking about recent girls she’s hooked up with, or girls she would like to hook up with.

Compared to that, The Fosters is gold. Throughout the series, Stef and Lena’s sexuality is never shyed away from, but they are also allowed to be multi-dimensional and complex characters who are not entirely defined by their sexuality.  The show explores the various dynamics in their home as the family deals with events such as the fostering and eventual adoption of two extra kids, Stef and Lena’s marriage, and the kids interacting with their birth parents. 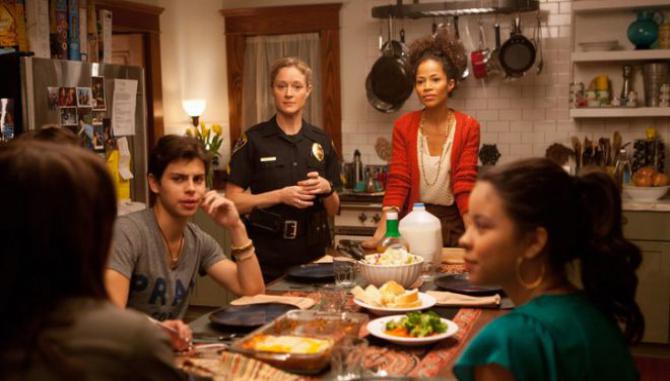 Lesbian women on TV often fall into one of two tropes: that of the hyper-sexualized “lipstick lesbian” or that of the man-hating and entirely un-feminine “butch.” Fortunately, neither Stef nor Lena falls into these categories.  Lena is conventionally attractive as well as extremely smart; she has a Ph.D. and works as a vice-principal at a charter school that all of her kids attend. She is very calm and often the voice of reason in the home. Stef is also conventionally attractive and works as a police officer alongside her ex-husband. She is a bit more impulsive and rash than Lena, but also shows a soft side on occasion.

Just the fact that Stef and Lena are allowed to display these various layers of their personalities illustrates the progressive nature of the show. It is practically revolutionary that they are able to be defined by labels such as “mom,” “vice-principal,” “cop,” “smart,” and “impulsive” rather than just “lesbian” or “woman.”

While The Fosters doesn’t define its leading ladies by their sexuality, it does explore how their queerness affects their relationships and their views of the world. We see flashbacks of Stef coming out to her Dad, and the casual homophobia that he displays throughout the show. We see adopted daughted Mariana getting fitted for a dress to wear to her Quincanera and being asked where her Dad is. We see it when Mariana is then too embarrassed of her Moms to dance with them during the traditional father-daughter dance, so she asks Stef’s ex-husband to dance with her instead. 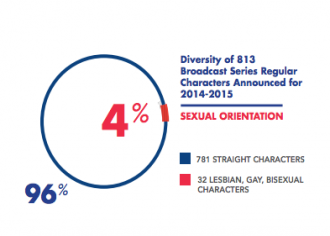 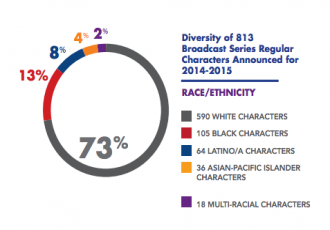 Research shows that prejudice is best combated by exposure, so it’s great to see The Fosters airing nationwide on ABC Family. Without much representation on television, audiences hungry for genuine lesbian characters have recently turned their attention to the growing world of webseries and online streaming services like Netflix, where lesbian women are easier to spot in both original shows (like Orange is the New Black) and once-hard-to-find movies. Webseries allow their creators maximum creativity, but it’s great to see a positive, realistic lesbian couple beamed onto the TV sets of millions of Americans, too.  I’m glad ABC gave the show a vote of confidence with its decision to renew it for another season.

Although The Fosters is a great start, it is just that: a start. In order to affect positive change we need to increase the number of gay characters on TV from a tiny four percent, we need a slew of more shows like it. 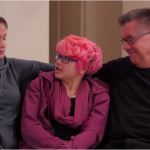