How Big of a Problem is Harassment at Comic Conventions? Very Big. | Bitch Media

How Big of a Problem is Harassment at Comic Conventions? Very Big. 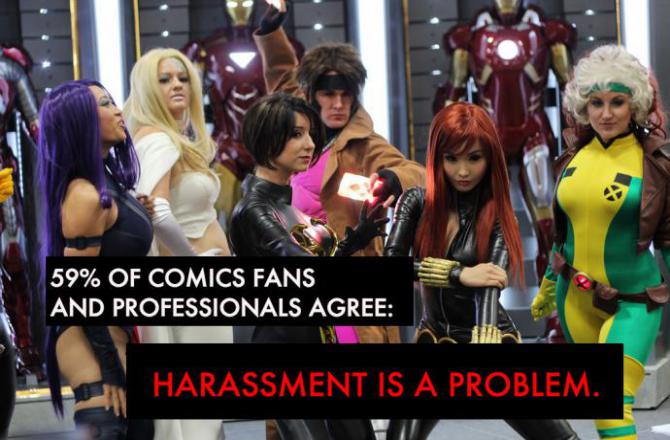 It’s hard for comic conventions to shake the idea that they’re the sole domain of people who look like the Simpsons’ Comic Book Guy. In reality, comic conventions are attended by an ever-growing number of female fans: Female attendance at New York Comic-Con has grown 62 percent over the last three years alone, making women to 41 percent of total attendees. As the number of female fans attending cons has grown, so have conversations about harassment in the comics industry and at conventions specifically.

As 130,000 people head to San Diego Comic-Con (SDCC) this week, it’s important to recognize that while harassment can occur in comic shops and elsewhere, the bulk of complaints regarding gender harassment in comics happen at conventions. Yet SDCC has failed to put an emphasis on their harassment policy by not publicly posting signs about harassment or having a clear and well-publicized reporting process for incidents.

As a comics editor, writer, and fan myself, I got interested in how often people at conventions experience harassment. So earlier this year I conducted a survey on sexual harassment in comics, receiving 3,600 responses from people that varied from fans to professionals. The survey was distributed and conducted online, with people sharing it via Twitter, Facebook, and especially Tumblr and self-reporting all information. Of the people taking the survey, 55 percent of respondents were female, 39 percent were male, and six percent were non-binary (see the raw survey data here).

Out of all respondents, 59 percent said they felt sexual harassment was a problem in comics and 25 percent said they had been sexually harassed in the industry. The harassment varied: while in the workplace or at work events, respondents were more likely to suffer disparaging comments about their gender, sexual orientation, or race. At conventions, respondents were more likely to be photographed against their wishes. Thirteen percent reported having unwanted comments of a sexual nature made about them at conventions—and eight percent of people of all genders reported they had been groped, assaulted, or raped at a comic convention. 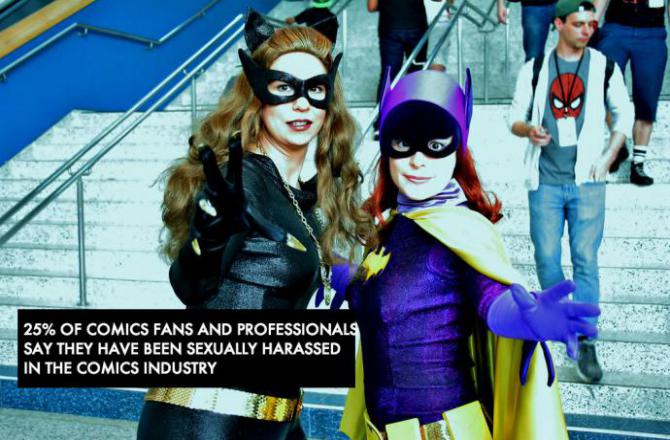 Photo of classic Catwoman and Batgirl cosplayers by Ryan C, via Creative Commons.

To put these percentages into perspective, if 13 percent of San Diego Comic-Con attendees have unwanted comments of a sexual nature made about them this week, that would be around 17,000 people. And if eight percent of SDCC attendees are groped, assaulted, or raped, that’s over 10,000 attendees suffering harassment.

It’s not difficult to see why conventions can be rife with harassment. People in my survey report being harassed by fans, journalists, publishing employees, and comics creators, so there are issues at every level of the industry. Conventions involve cramming a lot of people into one space where ideally everyone gets to move around. This means there are a lot of brush-by maneuvers, awkward running into people, and a lot of general closeness. It can be difficult to tell in a crowd who is accidentally touching you and who is groping you. Even if you know for sure someone groped or assaulted you, it can be hard to figure out who they were when they can just disappear into a crowd. While many people never publicly named their harasser because they are worried about their career or the power of their harassers, 20 percent of survey respondents who experienced harassment said they did not name their harasser because they don’t know the harasser’s name.

There’s also the cosplay factor—many comics fans, anime fans, video game fans, and the like who attend comic conventions like to dress up as their favorite character. Cosplay is an impressive art that takes a great deal of time and often money. Unfortunately for many fans, their cosplay results in creeps following them around, trying to take up-skirt or ass photos, and thinking they can generally harass them, especially if they wear a costume that seems sexy. Plus, unfortunately there is still a small contingent of geek men who want to make women feel unwelcome at conventions so they will harass, berate, and belittle them. And after the convention ends for the day, the party moves to the bar. BarCon, as many call it, is a time for people to relax and chat after a long day at the convention. But it’s also another crowded venue now with intoxication added into the mix.

To combat harassment, an increasing number of conventions have rolled out anti-harassment rules that they make sure have a central role in the convention. In April, for example, Seattle’s Emerald City Comic Con put up impossible-to-miss posters about the convention’s “zero tolerance policy” toward harassment. Information about how “Cosplay is Not Consent!” was all over their venue, website, and event guide and the convention hosted a panel on preventing harassment (of which I was a participant). 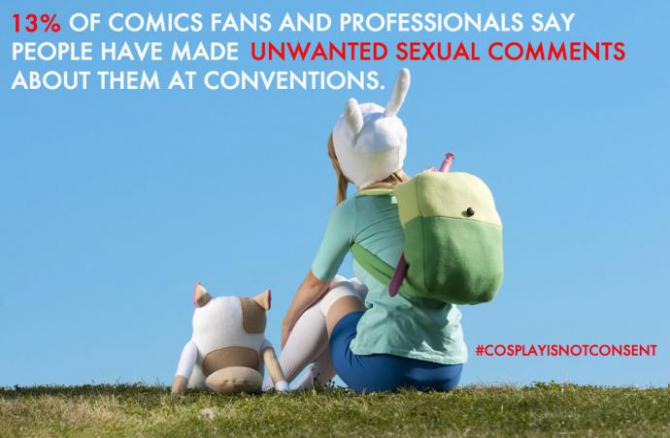 Photo of Fiona (from Adventure Time) cosplay by Josh, via Creative Commons.

Meanwhile, after a group called Geeks for CONsent began a petition calling on SDCC to create a formal anti-harassment policy, the con’s Marketing and Public Relations Director David Glanzer told a reporter that publicizing an anti-harassment policy might be bad for the image of conventions: “I think the news media, might look at this as, ‘Why would you, if this wasn’t such a bad issue, why do you feel the need to single out this one issue and put signs up about it?’ I think that’s a concern.” Glanzer certainly has a very different idea of what’s “concerning” about harassment at conventions—and pretending it doesn’t exist isn’t going to protect anyone.

This past week, SDCC finally took a step in the right direction, sending an email to all ticket holders that included a note about how harassing someone could lead to being banned from the con:

“Harassing or offensive behavior will not be tolerated. Comic-Con reserves the right to revoke, without refund, the membership and badge of any attendee not in compliance with this policy.

Persons finding themselves in a situation where they feel their safety is at risk or who become aware of an attendee not in compliance with this policy should immediately locate a member of security, or a Comic-Con staff member, so that the matter can be handled in an expeditious manner. If your safety is at risk and you need immediate assistance you may also use a white house phone and dial 5911.”

This is the first time ever that SDCC has made a specific anti-harassment policy so prominent and offered a clear course of action for fans who are harassed.

There are lots of comics people of all genders who know perfectly well how to behave properly at conventions. Unfortunately, just like anywhere else, there are always jerks ready to pounce when there is an opportunity. Readers might feel concerned about attending a comic convention, and it’s understandable. The good news is that as these issues have grown in prominence and conventions can curb bad behavior if they listen to their fans and take responsible steps.

The data supports that there is a problem—and now it’s time for comic conventions to make sure fans feel safe and know how to act.

Related Reading: A Look Behind the Scenes at Gender and Comics Distribution.

Janelle Asselin has a BA in English Language and Literature and an MS in Publishing. She uses those degrees as a feminist geek who edits, writes, and writes about comics obsessively.