How Do We Get Beyond Talking About Women as Either Sexy or Sex-Less? | Bitch Media

How Do We Get Beyond Talking About Women as Either Sexy or Sex-Less?

Feminist forums have been abuzz recently about the editor of Esquire UK’s comments regarding the objectification of women in magazines.  More than the content of these discussions, however, what is most notable to me is how  mainstream conversation about sexuality uses a black-and-white framework: women’s bodies can only be a sex object or a not a sex object.  Thanks to the term “objectification,” bodies are seen as either objects or non-objects—it feels like there’s no wiggle room. As someone who works as a model, I think we should instead focus rather than the conversation around women possessing their own sexuality.

His comments have been acknowledged in a variety of ways, with some people appreciating his honesty and some people reacting with outrage.  Noah Berlatsky at The Atlantic offered a historical analysis, going as far back to Victorian England to provide societal rationalizations on the objectification of women by women.

As valid as these arguments are, I still have issues completely accepting them. When I work on fashion shoots, I’m someone who might be considered an object by these writers. By pointing out any display of sexuality as being sexist or objectifying, instead of an affirmation of a woman’s femininity, these writers may be doing more harm than they intend.

This categorical view creates the perception that women are two-dimensional: an oversexed doll or a non-sexual being.  There is little room on this scale for a woman who flaunts her curves out of pride or for a regular geek who likes to be femme.  For example, when I do a shoot, I’m proud of my feminine body—I’ve worked hard to get in shape and look the way I like.  As an artist, I like the fact that the viewer (depending on whether or not s/he finds my image beautiful) might feel an intrinsic emotion by looking at me.  I’m using my body to create an idea, a story.  Whatever that idea or story is is up to the viewer, and all cries of objectification is to me a failure of the imagination and appreciation of the feminine form. It’s gotten to a point where apparently any images of women in the media are subject to an objectification analysis.  Take the aforementioned Berlatsky’s analysis in The Atlantic, where he dissects an image at right from the Amazon.com/Fashion advertisement in Vogue based on historical contexts.  He says that the image invites “the reader to see herself as a woman seeing/appreciating/enjoying other women,” like the model on the right.

To me, the model on the right seems like she is gazing off into the distance, perhaps to show off her handsome profile, perhaps because the photographer directed her to for some differentiation from the other model, perhaps both.

This notion of an empowered female body is nothing new. However, today’s age of scantily-clad celebrities has tarnished the idea of a respectable sexuality.  Our society’s obsession with sex scandals and body image has pushed sexuality into a corner in which the only two options are along the lines of “slut” and “prude,” or, objectively speaking (pun intended), object or non-object.

What all feminists, chauvinists, and folks in between need to remember is that a woman is neither a sexual object nor a chaste being.  A woman possesses sexuality and exhibits sexiness.  We are not sex reincarnated, but we have bodies we can be proud of and embrace, regardless of who is watching.

"I'm using my body to create an idea, a story. Whatever that idea or story is is up to the viewer, and all cries of objectification is to me a failure of the imagination and appreciation of the feminine form."

Isn't it really the fashion editor, client and photographer who dictates the narrative/story of a given fashion shoot? Perhaps the model's ideas or opinions are occasionally asked or utilized in an advertising campaign, but ultimately and primarily the client and fashion editor are the decision makers holding the power.

really?! ALL cries of objectification show a lack of imagination and appreciation of the female form.

I am an amateur photographer and I promise you I thoroughly enjoy the female and male physical form. The objectification points I read about understand this...but attempt to interpret to the larger point about what these messages and images say as they bombard our visual culture. They frequently seem to say--this is where women's worth begins and ends, how sexy she rates to men.(or women)

Also if you think the media images are there just to appreciate the female form--why is there such a lack of diversity in body types, shapes and colors in the media like the Esquire photo above, or the fashion ad above,, Most of the images we have in the Media of the female form are like the ones on this post. We all know that Most women don't look like that. So if the Victoria's Secret and Sport Illustrated and the fashion world and the Esquire babes are just merely about appreciating the female form--why the incredibly narrow definitions of female beauty and sexuality and sexiness? Does all female sexuality reside in how our bodies look? What about how are bodies feel and how they function? Is there anything sexy in that?

Hi Aitch Cee S,
Thanks for your comment. I say "cries" of objectification to distinguish between measured applications and token accusations. You're right about the editorial decisions regarding the story, but the individual model also brings to the image what s/he makes of it. Much like the way different actors can create variations of the same character, even as directors and writers control the narrative.

I'm not saying all studies of objectification are baseless or unfounded. My point is to highlight the lack -- or dismissal -- of other ways of looking at a woman in the media. Media images are there to tell a story, sell a product, make a statement, etc. The limited variations of the female form and definitions of sexuality in these mainstream images are also issues I plan to discuss in this series, so kudos for bringing that up already.

thanks for the response Yoonj! 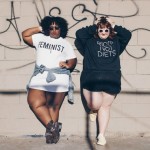