How Do We Solve Publishing's Gender Gap? | Bitch Media

How Do We Solve Publishing's Gender Gap? The VIDA count is a staggering annual statistical breakdown showing the rates of publication between women and men in several respected literary outlets. This year, the count reveals that men continue to have 70 percent of bylines in mainstream media. VIDA, a burgeoning organization of women in literary arts, conducted the first count in 2011, hoping to initiate a long overdue conversation about gender discrimination in the publishing world.

“We did not go into this thinking we knew the answer to something and this was going to illustrate it, because this is a complicated issue,” VIDA co-founder, Erin Belieu, told Mother Jones last April. “But you can’t deny the starkness of such an incredibly wide discrepancy.”

“I should point out that we didn’t set out to publish an all-women essay section,” writes Gutkind. “As we read for this issue, we were drawn to a number of essays about, in some way, ‘the senses’—hearing, sight. Or maybe it’s more accurate to say they’re about ‘perception.’ It just so happened that all of them were by women.”

Whether or not this women-only issue was a beautiful accident matters less than the message it sends. “Female Form” is an indirect response to the VIDA count, which has forced literary venues to be aware of these discrepancies and begin to brainstorm possible solutions.

Katha Pollitt at Slate believes the obvious solution to these discrepancies is to hire more women editors, writing, “It’s naive to think that the fact that most top editors are men isn’t part of the story.”

But even women editors, like Claire Armitstaid at The Guardian, struggle sometimes to find women writers. “We always try to keep an even balance but many more men offer themselves to review books than women, so we have to go out and find them,” she writes. “My own feeling is that there is an issue of confidence among women writers.”

Creative Nonfiction doesn’t seem to have this problem. Gutkind mentioned in his forward that CNF “consistently receives more submissions from women than from men.” CNF wasn’t part of the official VIDA count, but I counted up the bylines in last year’s issues and found a fairly even gender distribution of writers with a slight lean toward the ladies.

The point of “Female Form” is not for CNF to prove they publish women, which they have already; it’s to drive the point that women are writing significant nonfiction.

“It’s not true that women write only memoir or that they don’t write about ‘serious’ topics,” writes Gutkind. “There are a lot of women writing serious nonfiction; they’re just not getting the serious attention they deserve.” “Female Form” opens with a conversation between The Rumpus’s “Funny Women” editor, Elissa Bassist, and Cheryl Strayed. These two women have a history, namely that Strayed initially coined Rumpus slogan “Write Like a Motherfucker,” in a 2010 Dear Sugar exchange with Bassist. The slogan—which has become a mantra for many young writers—emerged as a response to a gender dilemma: Bassist’s concern that she “wrote like a girl” and, being at the mercy of gendered disadvantage, would be taken less seriously than a man. To this, Strayed advised her to “write so blazingly good that you can’t be framed…you have to tell us what you have to say.”

In conversation with Bassist, Strayed reveals that men have generally responded to her bestselling memoir Wild with surprise, stunned they could relate to a personal narrative written by a woman: “The fact that they were surprised that they loved a book by and about a woman is an indication of the sexism women writers are up against every time they write. It tells me that women writers are still perceived as less capable than men writers of telling the big universal human story.”

This perception is exactly what CNF sets out to disprove with “Female Form,” whose essays cover topics like genetics, molecular biology, entomology, archaeology, and ophthalmology. They range from essayistic to personal, and both ends of that spectrum speak to the “big universal human story” because the writers are engaged with their subject matter. This engagement is what makes good writing relatable, regardless of who is doing the writing.

An obvious criticism of special “all-women” issues is that they’re sort of a BandAid on the rather large gash that is gender discrimination in the publishing world. CNF already features women on a more regular basis, but if other publications hop on this trend, women writers may end up just getting siphoned off into all-women’s issues—a temporary solution that could slightly sway VIDA’s forthcoming counts but that doesn’t really change anything.

VIDA’s Erin Belieu believes the real solution is integration. “I know there’s a part of the feminist world that is like, ‘Hey, screw ‘em, we’ll do our own thing over here,’ and I can see there’s a value in that,” she says. “But a kind of nudgy part of me thinks: No. I want access, and I want my daughters to have access to the exact same thing, because we all know there’s no such thing as separate but equal.”

“Female Form” is a step in the right direction, if only a small one. But I wonder what would happen if CNF didn’t call attention to their all-women issue. What if they just happened to publish an issue with all women writers? Larger forces like “marketing” would prevent such oblivious happenstance, but I look forward to a futuristic world in which an all-women issue could truly happen by accident. 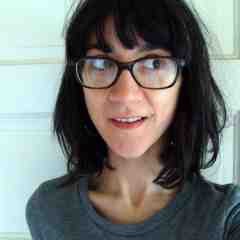 Candace Opper is a writer, a painter, a dinosaur enthusiast, and an aspiring suicidologist. She is currently at work on a manuscript about suicide and the ways we give it meaning.

by Sarah Mirk
Today we're reading about a "pharma bro," Black cosplay, and queering your taxes.