How "Mad Men" is a Call to Arms | Bitch Media

How “Mad Men” is a Call to Arms

Joan got herself a seat at the table… but equality was a long way off.

If you’re an active Democrat, you’ve probably gotten the emails: “No More Mad Men.” In the past year, the AFL-CIO used the line to protest the lack of equal pay, Mad Men showed up in Obama’s 2014 State of the Union, and a senator used Mad Men as a hook to push for birth control coverage. As the show prepares to air its final episodes starting April 5, political organizers are harnessing the hypnotic power of the show to represent how far women’s rights have come since the 1960s—and how much we still need to accomplish on issues like the wage gap.

Mad Men is the rare show that has been both a current political and cultural touchstone, a show about the past that gets us all talking about the present. Since its debut in 2007, the show has hooked viewers not just with excellent writing and spot-on costumes, but with its frank depiction of the reality of many women’s lives in the 1960s. Mad Men has been better than any number of traditional history lessons at immersing us in a world that, though superficially elegant and sexy, is ultimately not desirable for anyone who, you know, believes in equality.

An AFL-CIO graphic linking Obama’s State of the Union to Mad Men.

From its very first episode, Mad Men addressed the issue of women’s sexuality and reproductive rights. It’s 1960, and the birth control pill has recently been approved for general use. On her first day at work, Peggy Olson is sent by office manager Joan Holloway to her doctor, and prescribed the pill. The doctor, taking note of her single state, gives her a brief, patronizing lecture about not being “the town pump,” has a few laughs at the alluring Joan’s expense, and gives Peggy her prescription. Joan’s intent is clear—a secretary has to expect to be prepared for anything in the advertising business, and at least now, she can keep herself safe.

Meanwhile, here in the present, Americans were immersed in the newest incarnation of the War on Women. The debates over birth control and abortion heard Republican rhetoric was eerily echoed by the lives of characters on Mad Men. During Mad Men’s sixth season, women in North Carolina dressed up in Mad Men costumes to attend a hearing about a state bill that would allow employers and pharmacists to refuse to cover or dispense contraception for moral reasons. “We love a good vintage look—but not when it’s running the state legislature,” said Melissa Reed, Vice President of Public Policy for Planned Parenthood Health Systems. 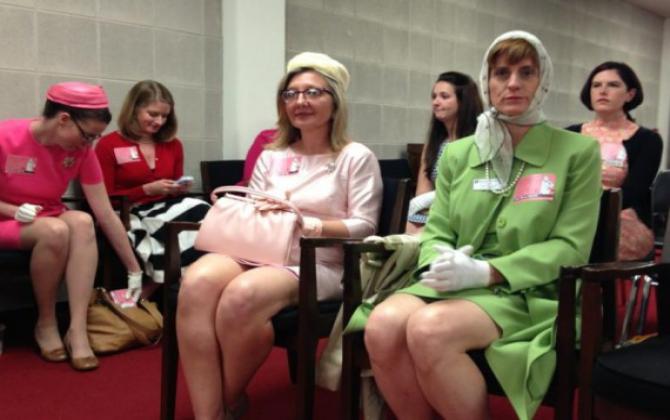 Protesters at a North Carolina hearing on anti-reproductive rights legislation. Photo by PPACNC.

The current pushback against reproductive rights has included such indignities as mandatory trans-vaginal ultrasounds and waiting periods, Mad Men-ifying women’s medical treatment by subjecting them to procedures they don’t want. These kinds of bills treat women seeking birth control and abortion as patients who are incapable of making their own decisions, and forcing them to “think” about what they are doing, when all they are doing is seeking a legal medical procedure.

Abortion has come up in Mad Men more than once, as well. New York was the first state to legalize the procedure and create abortion on demand, but that was not until 1970, the year the show is about to reach. Abortion is discussed in the show in coded language. It’s mentioned by a woman who refers to “knowing someone”—a reality for a lot of women prior to Roe v. Wade, when you couldn’t always rely on birth control but needed an option in case of an unwanted pregnancy. On the second season of Mad Men, Betty Draper tentatively brings up the question of abortion with her doctor, but he quickly chides her and assumes she’s only worried about “losing her figure.” An abortion could be expensive, dangerous, even fatal, but these were risks many women took when having a baby was simply not an option.

The women of Mad Men are not very overtly political. Actress Elisabeth Moss described the politics of her character, Peggy, by saying, “She doesn’t care about politics unless it relates to her job. She’s not going to be a hippie.  She’s a professional woman.”  But pragmatic Peggy pays enough attention to what’s going on in the world to be able to cite the Equal Pay Act when she tries to advocate for a raise. Last month, the ACLU used this scene to note that in a call to action last month, saying that Peggy is still waiting for equal pay, half a century later.  None of the female characters on the show have advocated much for political activism and the actresses who play them are reluctant to describe the characters as “feminist,” but the show paints a stark political reality for viewers by immersing them in the recent past. Audiences experienced a visceral reaction to scenes of women smoking during pregnancy and Betty Draper’s blasé response to her daughter wearing a dry cleaning bag over her head, but we’re also hit hard by by the casual sexism that proliferated in the workplace, the scenes of marital rape, and the expectation than women are happy taking care of kids in suburban homes. By beginning the series in 1960 and then spinning forward through the decade, creator Matthew Weiner depicts the beginning of women nationwide saying,  “Wait, why is this accepted? Why is this the way it is?” And, more potently, “It can be different. It should be different. It will be different.”

Peggy fought her way to better pay—even when it meant talking Roger Sterling out of his pocket money.

Both this burgeoning realization and the clear depiction of women’s largely unquestioned second-class status have helped galvanize Mad Men as a political tool. When she and two other senators introduced the 21st Century Women’s Health Act in March, Washington Senator Patty Murray name-checked the show, saying:

”As we continue to fight back against those who miss the Mad Men era, the 21st Century Women’s Health Act lays out important ways we can and should move forward on women’s health, from maternity care, to preventive health services, to continuing to expand access to birth control, to ensuring survivors of rape have access to emergency contraception in every hospital. Period.”

Mad Men should be a cautionary tale to women who insist they don’t need to be feminists and that the battles we waged in the 1960s are now won. By throwing a light on the past and showing us who we were, Mad Men asks us to also consider who we are now. We can’t feel smug relief about the bad ol’ past when we’re sliding back into it. We can’t congratulate ourselves on progress if poor women are still just as stymied by lack of options for reproductive health care now as they were fifty years ago. As abortion restriction laws leave some states with only a few functioning abortion clinics, we don’t want to be in a position where we hope someone “knows a doctor.”  Mad Men uses entertainment to deliver a stinging history lesson, and ultimately, a warning. However beautiful this world looked, we have to keep up the fight to avoid going back to it.

Sarah-Jane Stratford is currently writing a novel about women in the early days of radio, to be published in Spring 2016. You can follow her on Twitter.