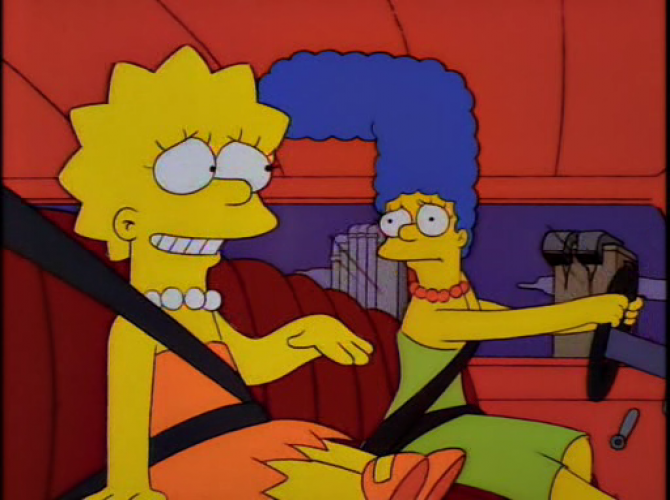 “Lisa refuses to play dodgeball because she is sad.” This simultaneously hilarious and heartbreaking line is ripped from the wonkily drawn first season of The Simpsons, in the episode “Moaning Lisa,” where the 8-year-old wunderkind suffers from a bout of depression. During a painfully silent car ride, Marge remembers how her own mother urged to her to smile even when she was sad, and states Lisa to do the same. “And then you’ll fit in, and you’ll be invited to parties, and boys will like you,” she promises.

There are a lot of gems in the older Simpsons episodes that reaired in chronological order last week on FXX’s Every Simpsons Ever marathon this past week—the channel purchased the right to the entire Simpsons canon for a reported $1 to $2 million per episode—but that moment lured me in. It’s not only identical to many, many car rides I’ve had with my own mother, it’s a crashing of two different waves of feminism.

Even at her lowest moments, we shouldn’t devalue the gift to postmodern media that is Lisa Simpson. She’s an intellectual, a jazz prodigy, a voice of justice and reason within the confines of a small town and often-apathetic family. This is a character that was so incensed by hearing the sexist platitudes spewing out of her talking Malibu Stacy doll that she created her own a doll with the “wisdom of Gertrude Stein and the wit of Cathy Guisewite.”

She’s a second grader. I was still chewing the fingers off my Barbies at that age. Point being, Lisa Simpson is the shining example of third-wave feminism that many of us looked to growing up.

And then there’s Marge. Hmmm…

In second season episode “The Way We Was,” we get a peek at teenage Marge. She’s active on the debate team, seemingly proficient in French, and casually experimenting with feminism. In fact, she meets Homer after landing in detention for burning her bra at a rally (which, just a reminder, was not a thing feminists actually did). 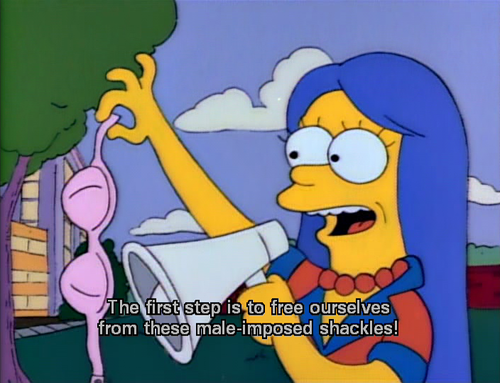 Cut to the present, and Marge, for all her intelligence, has primarily become the no-nonsense housewife archetype to Homer’s bumbling buffoon.

For what it’s worth, Marge chooses the life of a homemaker. Sure, she’ll get a one-episode job every few seasons and she has a sublimated frustration about her family’s lack of appreciation for her workload, but most of the time, she contently owns the domestic sphere. “It must be exciting to make a different set of beds,” Lisa deadpans in “Summer of 4 Ft. 2,” when the family goes on vacation to a summer home. “I know you’re joking, but it is!” Marge replies, chipper as ever. 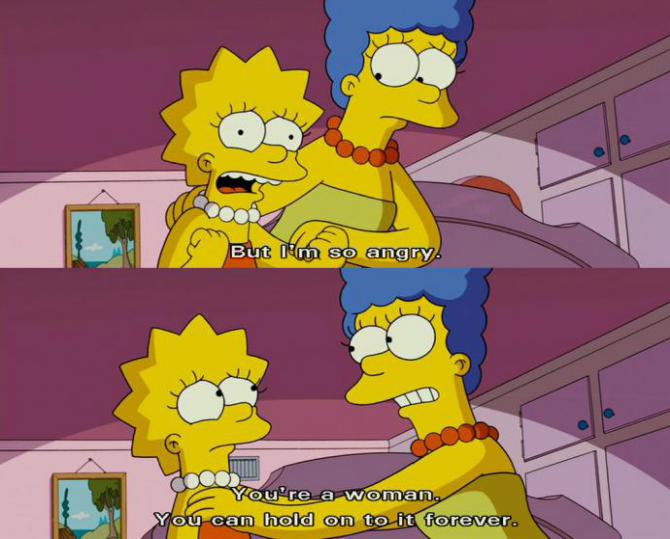 There are times where she still fights the good fight. In “Homer’s Night Out,” she sees an image of Homer with an exotic dancer, Princess Kashmir, after it spreads around Springfield as a pre-Internet meme. Even in her rage, her primary concern is to educate her husband and son on how to treat women with respect, and she pushes the two to get to know Princess Kashmir, to humanize her.

Then there are times where Marge is decidedly less progressive. Sometimes it’s within subtle nuances: in “Lisa on Ice” she urges Lisa to play sports, yet thinks hockey is too dangerous for her, although it’s entirely fine for Bart. Other times it’s more glaring, like how in “There’s Something About Marrying,” she’s deeply uncomfortable about her sister marrying another woman. While Lisa is out campaigning for equality, Marge is decidedly more conservative.

Lisa—who due to the floating timeline could be construed as a Gen Xer or a Millennial—is a casual ambassador of third-wave feminism. She fights for the rights of all living creatures, from animals to trees. She’s well-informed, hyper-ambitious, and shows a willingness to learn about different cultures. Moreover, Lisa’s so politically correct that she once told a stuffed animal Bart was the black sheep on the family, and immediately followed with, “Not that black sheep are in any way inferior to white sheep.” Lisa is indicative of that hand-in-many-jars thing we tend to strive for: we’re attempting to be to be ultra-inclusive, to strive for large personal accomplishments, and to, for lack of a better term, have it all.

Marge, however, is an emblem of what happened to a portion of baby boomer second-wavers. She isn’t preoccupied with a lot of political issues and while she does openly acknowledge the inequality between the sexes on a basic level, it’s simply not a priority for her. Plus, while her generation fought so hard to get into the work place and establish their independence from men, something fell by the wayside (i.e. getting pregnant with Bart) and she spends most of her time making beds and cleaning up after Homer’s mess.

I’m not trying to pigeonhole baby boomers or second-wave feminists as quitters to the cause—I say this as the daughter of a Marge. My own mother, who attended those same rallies in the 70’s, unofficially retired from political activism under the exhausting crush of motherhood. Currently stuck with the double shift of work all day and chores all night, she tends to find my views as impractical concerns. She’s progressive to a point, but too settled into her current identity to attend a protest or join up with a political campaign.

And I think it’s fair to say that the Lisas of the world sometimes fear being regulated to that kind of conventional role. We struggle to be characters rich with activities, causes, hobbies, we want to be well-educated. We don’t want to become a frustrated sitcom housewife.

Luckily, the Simpsons writers made Lisa develop very early on in the show into a character who is beyond a trope. Her intelligence both celebrated and harnessed as a comedic force. This is especially rare, especially when you consider contemporaries like Meg Griffin of “Family Guy,” who feels like she’s developed by a group of writers who are unwilling to understand the mindset of a teenage girl. Half of Lisa’s strength is credited to writers who choose to treat her as a human being.

The other half is credited to Marge. Let’s go back to that scene in “Moaning Lisa.”

After Marge witnesses Lisa receiving some generalized scummy male treatment from her forced-smiling—one little douchelord offers to let Lisa do his homework—she immediately recants her previous statement. “Always be yourself,” she says, “If you want to be sad, honey, be sad. We’ll ride it out with you. And when you get finished feeling sad, we’ll still be there. From now on, let me do the smiling for both of us.”

There’s a definite negotiation of understanding between these two waves of feminism. It’s not aggressive, not the focal point of the series, but it’s important, because along with the heavy weight of being an activist, Lisa is a lonely young girl seeking out compassion. It’s Marge alone that meets her halfway.

Lisa is our feminist peer, but we shouldn’t devalue the importance of someone who’ll support you through the depression you’re suffering, your refusal to eat meat, and whatever cause-of-the-week you’re fighting for. Even if she doesn’t always understand, Marge is capable of rooting enough empathy from her own experiences to relate to Lisa. She encourages Lisa to be true to herself, and that’s huge.

Sometimes a brilliant spark of human empathy is all that’s needed to move forward. The Simpsons is still relevant because they keep bringing that spark for the past 25 years now. And it’s because of the realistic and respectable Simpson women that I’ll gladly stick around for the next 25.

Mary Grace Garis is a writer and ex-Goth kid who likes Joseph Gordon-Levitt, mozzarella sticks, and, you know, satirical pieces about postmodern pop culture. Follow her at @MaryGraceGaris.

Mary Grace Garis is a goth kid success story who fingerprints all over Elle.com, Bust.com, Hellogiggles, Bustle, and other corners of the Internet. You can follow her on Twitter at @MaryGraceGaris, where she posts about her love of Morrissey and mozzarella sticks...also sometimes writing.

Relevant: How TV Finally Got Realistic About Abortions