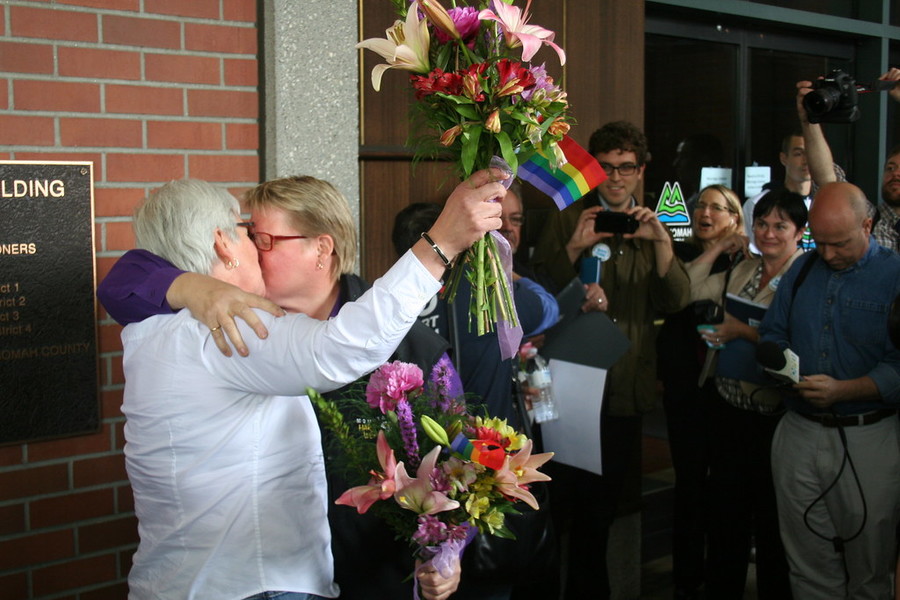 Excitement was running high at the marriage license office in Portland, Oregon on Monday, May 19. A crowd counted down the minutes until the final ruling in a case challenging Oregon’s ban on same-sex marriage. But the feeling in the air was giddiness, not anxiety. Everyone seemed pretty sure that Judge Michael McShane would rule in favor of the gay and lesbian couples who filed the suit. After all, there had been no one defending the state law in court; Oregon’s attorney general declined to support the ban and Judge McShane shot down the National Organization for Marriage’s last-minute bid to defend the law.

When the expected ruling arrived at noon, the crowd struck up a gleeful chant of “Equality! Equality!” County workers quickly went about the job of signing up couples for the legal marriages they had long deserved. This is what legalizing same-sex marriage looks like these days. While California’s anti-Prop 8 plaintiffs spent four years sweating through nasty arguments in appeals court, Judge McShane wrote in his Oregon ruling that, “The case presents itself to this court as something akin to a friendly tennis match rather than a contested and robust proceeding between adversaries.”

Since the Supreme Court overturned Prop 8 and shot down DOMA last year, marriage equality advocates have served up all aces. Within just the past two weeks, federal judges overturned constitutional bans on same-sex marriage in Pennsylvania, Idaho, and Arkansas, in addition to Oregon. That is a mind-blowing shift from a decade ago. In 2004 when Oregon voters passed their state’s constitutional ban on same-sex marriage, Utah, Oklahoma, Michigan, Arkansas, Ohio, North Dakota, Louisiana, Kentucky, Georgia, Montana, and Mississippi all passed similar measures. It was enough to make many marriage equality advocates (well, me, at least) lose hope for swift reform.

Now, everyone is marveling at how fast our country has grown to support same-sex marriage. How did we go from a majority of Americans opposing marriage equality, with a Supreme Court Justice comparing laws against same-sex marriage to laws against bestiality, to federal discussion of the topic being a jovial game of tennis? Studies on the question have, rightly, pinned some of the cultural shift on the “friends and family effect” of people getting to personally know an LGBT friend or family member, declining rates of involvement with organized religion, and, in a bit of morbid reality, on the death of conservative older voters. 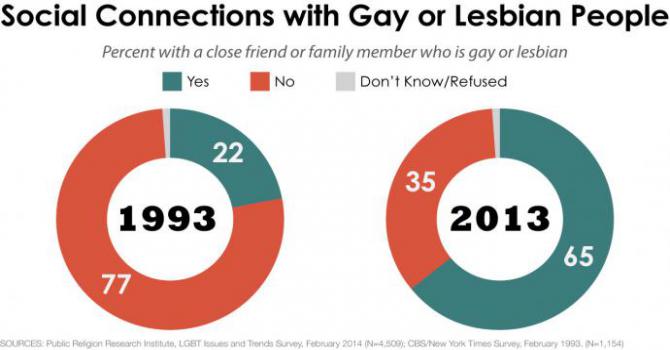 But one major factor in shifting our national culture that the flood of recent think-pieces seems to have mostly overlooked is how American pop culture has changed. In addition to getting to know LGBT people in real life, straight Americans have gotten to know LGBT people in TV shows, films, books, and news media over the past 20 years. Increasingly, our pop culture has actually talked about same-sex marriage, which helps change the way Americans think (and vote).

While there are still certainly not enough LGBT people on-screen or in our literature, there are more out folks in mainstream American pop culture than there were 20 years ago. GLAAD tracks the diversity of characters on broadcast TV and has found that while queer characters make up only two to four percent characters on scripted shows, their number is trending upward. “Last season marked a significant benchmark for LGBT representations on primetime television. The sheer number and prominence of the characters the networks brought to small screens across the country coincided with a stellar year of advances for the LGBT movement,” said GLAAD’s Wilson Cruz in the 2013 report. “Networks can lead the way in affecting culture change when it comes to LGBT equality.” 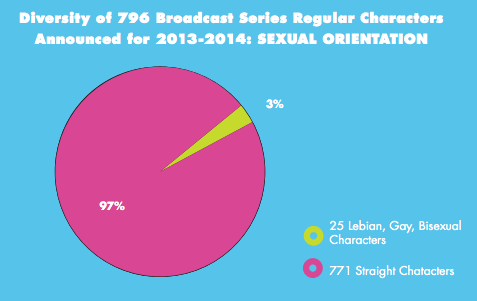 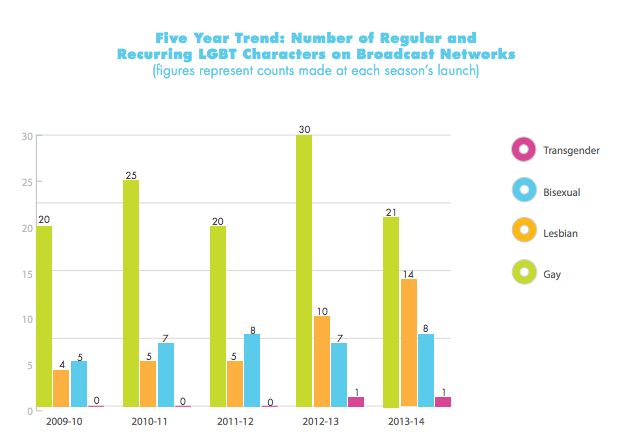 Getting 40-or-so queer characters on network TV is clearly not enough, but those numbers are just from scripted network TV shows—the GLAAD study notes that cable TV (like Bravo), streaming networks (like Netflix), and reality shows (like RuPaul’s Drag Race) are far more likely to have LGBT cast members that the network mainstays. Even with the low numbers, having recurring LGBT characters on popular shows ranging from Glee to Game of Thrones certainly has a powerful effect. From Ellen to Rachel Maddow, there are now several high-profile and successful out individuals who have a powerful platform on TV. Also, LGBT people are now more able than ever to make their own queer-centric shows online, as evidenced by the proliferation of queer webseries. Meanwhile, for all its other faults, mainstream news coverage has been overwhelmingly supportive of same-sex marriage, according to an analysis by the Pew Research Center. In March through May of last year, stories with more statements supporting same-sex marriage outweighed those with more statements opposing it by a margin of roughly 5-to-1.

As part of that shift, the rise of social media has meant that casual homophobia tossed off in sitcoms, advertising, and news shows will now certainly be met with a vocal online backlash. All in all, we’ve created a pop culture landscape where even Archie comics feature a gay wedding.

On the flip side, thinking of marriage as a holy and perfect union seems ridiculous in the age of reality television. It’s impossible to argue that same-sex unions would sully the institution of marriage more than, say, the 72-day marriage of Kris Humphries and Kim Kardashian, whose lavishly televised ceremony earned the couple $17.9 million. It seems all the more absurd to deny stable, loving same-sex couples the full civil rights of marriage when straight celebrities are very publicly burning through weddings like they’re Virginia Slims.  Judge McShane specifically points this out in his Oregon ruling, writing, “Oregon recognizes a marriage of love with the same equal eye that it recognizes a marriage of convenience. It affords the same set of rights and privileges to Tristan and Isolde that it affords to a Hollywood celebrity waking up in Las Vegas with a blurry memory and a ringed finger. It does not, however, afford these very same rights to gay and lesbian couples.”

While the current legal battle may have seemed like a friendly tennis match, this culture change has not been a cheerful sporting match full of lemonade breaks. Pop culture didn’t just change on its own. Creating a mainstream conversation that includes marriage equality was essentially the strategy of LGBT-rights group Basic Rights Oregon in its years-long campaign to move the needle of support in its state. In 2009, the group began canvassing statewide on marriage equality. The idea behind the campaign was not to convince voters of the political merits of the issue, but to start a conversation.  Other groups seeking to reverse the same-sex marriage bans agreed. “People don’t view this as a political issue, they view it as a cultural issue,” said the director of Equality California in 2009. “It takes more than one conversation.” Over the past ten years, we’ve been having a lot more of those conversations. Individuals and political advocates alike have worked with media to reframe same-sex marriage as a mainstream, basic value.

As Al Jazeera summed up in a report this week, “Support for same-sex marriage is surging as older generations die off and are replaced by younger Americans—who, unlike their elders, have grown up at a time when gay marriage has always been an actively debated issue.” The political strategy among equality advocates has not been to simply wait around until older voters keel over—young people have grown up having conversation after conversation about queerness and same-sex marriage. When even Forbes and Sports Illustrated run positive profiles of a gay NFL player, it’s clear our culture has evolved.

I remember going to a protest at the Colorado Springs headquarters of Focus on the Family in 2006 and staying with a lesbian couple who had recently turned down an invitation to debate same-sex marriage on local TV. “We’re done debating,” one of them told me. It seems like people who make and discuss pop culture have largely come to share that sentiment—we’re sick of debating whether equality is right or wrong. We’d rather have a conversation about all the reasons why it’s right.

I can think of few sweeter words than those uttered this week Brian Camenker, the head of the anti-gay marriage group Mass Resistance. “The media has closed ranks on the pro-family movement,” he told Al Jazeera (let’s take a minute to recognize how absurd the “pro-family” framing sounds). “They’ve basically decided that the case is closed, and that anybody who differs on the issue at all is an extremist.” Even though it’s not true that anti-same-sex-marriage folks are considered extremists (anti-gay arguments still get airtime, as the Pew study shows), what Camenker is expressing is surprise and frustration that the tide of American media seems to have shifted unstoppably against him. LGBT individuals, organizations, and allies have made conscious and concerted efforts to change the way our pop culture treats queer issues. All this conversation has come at a price—in every state where a court case has overturned a ban on same-sex marriage, keeping the issue in the headlines has required couples to put their safety on the line and private lives in the spotlight as they become the faces of a movement. Lawyers have poured their time and money into filing the complicated cases. But the couples and legal team celebrating their win on Monday in Portland seemed certain that gaining equal rights was worth the hassle.

What I’m worried about now is that as our pop culture embraces same-sex marriage as the norm, we’ll think that America has moved beyond discrimination against LGBT folks. While photos of loving gay and lesbian now find space on the front pages of newspapers from Oregon to Arkansas, 42 percent of Americans still oppose allowing gay and lesbian couples to adopt kids. Transgender people still face high rates of violence and discrimination. Over the next decade, I hope Hollywood and news media’s acceptance of equality as a mainstream value should will extend to these issues that often get left out of the limelight.

Related Reading: Do Gay TV Shows Have to Appeal to Straight Audiences to Survive? 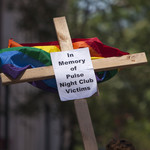