How Should We Remember Joan Rivers? | Bitch Media

How Should We Remember Joan Rivers? 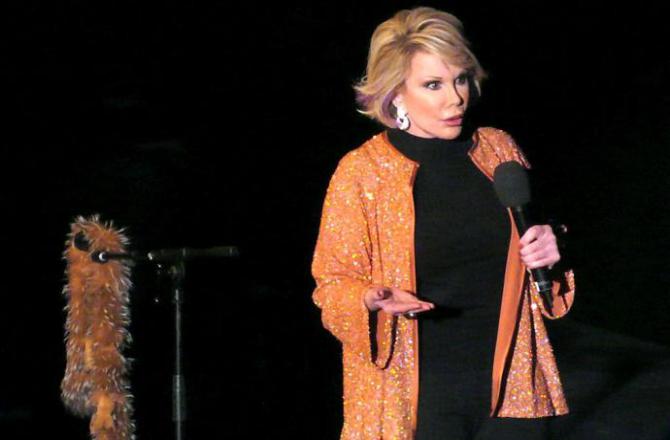 Joan Rivers hasn’t even been gone a week, and the question of what kind of legacy she leaves behind is already proving to be as confusing and full of conflicting narratives as her life was. Was she an overlooked feminist icon, who opened the door for every pull-no-punches female comedian who came after her? Was she a groundbreaker who lost the thread, and ended up going for cheap shocks instead of real laughs? Was she a powerful supporter of gay rights? Was she a dyed-in-the-wool Reagan supporter? Was she a kind, devoted mother, and best friend who volunteered and gave freely to charity? Was she a pointless provocateur, who told cruel non-jokes about Palestinian civilians’ deaths and refused to let her writing staff earn a living wage? Was she a survivor? Was she a frequent victimizer? Was she even funny?

The punch line is that, obviously, the answer to each of these questions is “yes.” Rivers’s real personality and beliefs seem nearly impossible to parse through an examination of her jokes, albums, books, and public appearances; to even try to do such a thing seems like a fool’s errand, ending in cowardly, reductive moves like saying that she “told uncomfortable truths.” Really? Is calling Obama “gay” really a brave, truth-telling stance? Does dismissing the First Lady with a transphobic slur really challenge society? Does saying that Lena Dunham is fat really require a bold ability to confront the status quo?

Rushing to dress up Rivers’s legacy in the familiar robes of the “truth teller we weren’t ready to handle” doesn’t just gloss over Rivers’ real highs and frequent, genuine lows, it misses an opportunity to examine the real lasting legacy of her greatest passion: the question of whether we should respect the concept of “shock” humor.

The idea of an equal-opportunity offender is heavily flawed from the get-go. Simply having the power and platform to get in front of a crowd and tell jokes means that you already have privilege and an advantage over some of the people you’re going to take aim at if you want to engage in what comedians refer to as “punching down“—telling jokes at the expense of those with less societal power than you.

“Punching down” is a practice frowned upon by a lot of today’s most beloved and acclaimed comedians, though it still shows up, most often as part of “equal-opportunity offender” comedy like that of the Comedy Central roasts or Anthony Jeselnik. Rivers was part of an old-school mentality that embraced the impossible ideal of the EOO, which is how Rivers reasoned away using the same kind of barbs to skewer, say, both Renee Zellwegger and the women who were held captive by Ariel Castro.

That sounds shitty, and it is shitty. But it is that same animating urge towards shock that led Rivers to her groundbreaking jokes about double standards in dating and abortion in the ‘60s, or her jokes about aging and anger in recent years. Is it possible to honor the transgressive potential of shock comedy without honoring everything that the shock comedian has to say?

It’s easy to grimace at the idea of offense for offense’s sake—most of the time, shock humor works by taking aim at folks who are are already societally disadvantaged. But sometimes, the practice of offense for offense’s sake gives performers the space to push transgressive, pioneering ideas (like trying to go on TV in the 1960s and tell jokes about abortion—something comedians have a difficult time doing to this very day), not because they’re necessarily part of their political agenda, but simply because they shock another contingent of listeners.

The Joan Rivers jokes that people are holding up as feminist breakthroughs didn’t come from a political place, though I think they served an important political purpose. Rather, those edgy jokes came from an urge to say whatever was considered too impolite to speak about in front of company, the same urge that made Rivers joke about her gynecological exams or the Holocaust.

Rivers’s potshots seemed to take a turn towards punching down as she aged, and I think in part that’s because the world at large became more interested in comedy that punched up and Rivers always seemed energized by doing the opposite of what everyone expected (or hoped) of her. But that urge toward confronting  the status quo as she saw it sometimes gave us some phenomenal jokes—jokes that weren’t only funny, but expanded the world’s ideas of what women could say and do, on TV, on stage, in the world. They also gave us some profoundly unfunny jokes that played into well-hardened stereotypes.

Not every world-changing political impulse comes from a sharp-eyed cultural critic working from a specific political agenda; sometimes they come from smart, talented people who are simply obsessed with making people sit up and listen. Just as a stopped clock is right twice a day, sometimes a shock comic like Rivers can, too, be right. But acknowledging her occasional right-on jokes doesn’t mean we have to pretend that she was always good at telling the time, so to speak.

We don’t need to celebrate everything Rivers ever did in order to respect her legacy; in fact, to do so would whitewash a career that’s only real visible throughline was a desire to push any and all envelopes. Rivers was sometimes hateful and sometimes wonderful. A more truthful memorial would be to not paint her as a feminist icon or as a cultural warrior, but as a legendary button-pusher. That’s who Rivers was—not someone whose beliefs seemed consistent, but someone whose greatest belief was simply in saying whatever made the most people the most uncomfortable.

Related Reading: Here is What’s Scary About Being a Female Stand-Up Comic.

i think it has been interesting to observe the difference in how the press views Rivers and how the public views her since her death. the general press has been overwhelmingly positive or neutral while the majority of the public has been negative. the only sorrowful or positive posts i saw in my news feed on social media were from other public figures and from major news outlets. nearly everyone else was indifferent or less-than-sorrowful.

i feel that it's important to consider why there is such a peculiar rift. it is almost like the press is either clueless or trying to convince the public to have sympathy and positive thoughts about someone who may have hurt them deeply. i think the press needs to listen to what people are saying rather than trying to talk over us and tell us how to feel.

Thank you so much for this! You've nicely articulated everything I've felt about the passing of Joan Rivers. I can understand why people are hesitant to label her as a feminist heroine, because, well, she really isn't one. Feminist heroine, no. Feminist, yes. She was a woman trying to earn a living and starting out in a time when the idea of a "working-wife" still rubbed a fair amount of people the wrong way. She not only survived, but thrived in an industry that is and always has been notoriously unkind and unfair to women and she did it on her own terms -- and by only using her razor-sharp wit and savvy business sense.

What really shocked and upset me was reading those super angry comments from Bitch subscribers who were so quick to vilify and spit on her legacy. I dunno, maybe these angry comments came from younger people who only remember the aging, desperate, no-filter, Fashion Police Joan and not the Joan who left Johnny Carson to host her own show and got so much shit for it, because she was a woman.