“Humor": The Ultimate Cop Out

By now, I've imagine that most folks have seen the controversial Sean Delonas cartoon from yesterday's New York Post. For those of you new to this story, the New York Post claims that comic is supposed to be a play on both the current economic situation and a reference to a woman who was attacked by a chimpanzee recently. 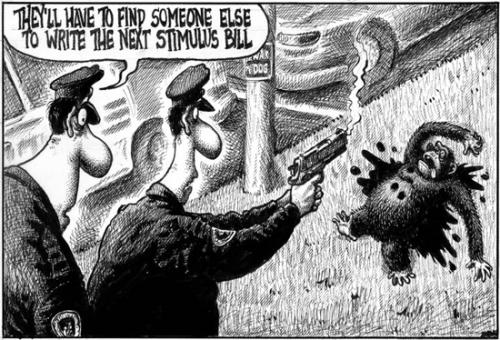 The comments section of numerous blogs are filled with debates over whether or not this cartoon is racist. I think at best, this is an example of internalized racism. At worst, it is evidence of incredibly overt and historically reoccuring racism. While the New York Post denies that the cartoon is racist, I don't think it coincidental that Obama has been portrayed as a monkey at least once before.

In light of this particular cartoon's debut, Gawker has compiled a top ten list chronicling Sean Delonas' less than stellar cartooning past. This "greatest hits" of sorts makes light of racism, sexism, homophobia, and sizeism, proving that Sean Delonas is more than deserving of the Douchebag Decree.

Personally, I am pretty tired of folks pulling out the "it's just a joke" card in instances like this. My personal belief is that joking about issues like the ones that Delonas has touched on only takes away from the seriousness at hand (in addition to demonstrating the privilege Delonas has in not being part of the groups he mocks). What do you all think? Are there times when jokes that feed into preexisting stereotypes are appropriate? Are there topics that should always be avoided? Do folks need to lighten up?

I would say that some of these cartoons are absolutely detestable - the man is clearly a stinking homophobe - but some of them are acceptable. The one about "straying wives" raised a smile for me, for example, and I don't think one need extrapolate that a joke about a woman who cheats implies that all women are promiscuous or unfaithful. However, I am in no way arguing that humour is any kind of excuse for bigotry or narrow-mindedness, merely that I didn't think that specific joke was actually offensive. I found the "gay pride parade" cartoon particularly distasteful, and have no desire to "lighten up" about it - it's foul. Several others are similarly reprehensible.

On the other hand, "the right to offend" is an interesting issue. While we might disagree with Delonas' views, he does have the right to express them.

As for the chimpanzee cartoon, my immediate reaction was to read it as racist, but I hadn't heard the chimpanzee story (I'm from the UK), and that does put it in a different context. I think that it's misguided (and as far as I'm aware the problems with the stimulus bill are due to Republican meddling more than anything else), but I couldn't say for sure that it was deliberately racist, unfortunate though its implications are.

While there is much that can be said about whether or not this cartoon is racist, whether or not this cartoonist is a racist, and a whole raft of issues surrounding the hotly debated right to be as racist, ignorant, biggoted and misogynistic as one wants to be in the USA, the only fact here that seems (to me) to be completely indisputable is the utter lack of sound judgement on the part of the New York Post editors. How could they possibly think that this wouldn't come back to bite them?

As an American living in New England (the region where the chimp attack took place) I have seen extensive news coverage of this horrific attack and its tragic and as-of-yet unresolved conclusion (the chimp is dead and doctors don't know if his victim will survive). The cartoonist's sophmoric take on this disturbing incident (which brings up the eternal issue of wild animal-as-pet, among others) reveals him as a shallow frat-humourist with a talent for sketching.

Without understanding the context of the animal attack, this joke is overtly racist; with knowledge of the attack it is a weak "joke" in extremely poor taste. It's lose-lose.

I agree that it is time for people to stop using the "just a joke" card to justify bigoted statements and images. Once again it's another issue of where to draw the line. Just the other night I was having a discussion about the use of sexist and sometimes sexually violent phrases in product naming. The Sweetwater Brewery, located in my hometown of Atlanta, has several beers with alarmingly sexist and obviously sexual names. Hummer and Motorboat are among the mildly objectifying of beer names, but Donkeypunch is definitely crossing the line. Those of you that aren't aware (I wasn't until my feminist boyfriend brought this all to my attention), a "donkeypunch" is when a man comes, he punches his partner in the face. Funny is it Sweetwater?
Although a bit off topic maybe, I could really relate to feeling like it's time people stop using sexually objectifying, violent, racist, homophobic, etc...humor. The fact that people don't recognize the true implications of these words and images, really does prove that it is a form of internalized hatred.

I've exhausted my energy trying to enlighten folks on other blogs about what "racism" means, so I can't say more then, I think it should be clear that the cartoon is obviously racist (even if it wasn't consciously intended). 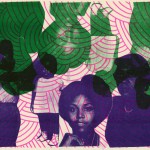