I know it's Election Day, but Blair masturbated on last night's episode of Gossip Girl!

This perfectly took the edge off of today.

I watch the show each week because it is on right before one tree hill, allthough addicting, i was still sort of iffy about whether i liked the show or not, after seeing that scene i decided..DEFINITELY, i was like shocked and amazed.This post is the second thing to completely make my day, after Obama winning<3

... but hearing about this did indeed made me smile. Perhaps it will repeat??

Note: Obama supporters and celebrants need to be mindful that there were other candidates <i>Bitch</i> readers and site visitors voted for yesterday. Respect, please. Let's move on to make a better, more diverse, honest, kinder, equal, respectful, inclusive, and such, country and planet that doesn't feature corporate advertising messages and celebrity "gossip" (pardon the pun) encroach our every waking second. Thanks. :)

I definitely think this is a good thing, especially since it seems like all we see nowadays is who got pregnant. I'd rather see someone on TV exploring and appreciating their own body rather than what celebrity is "knocked-up." Granted, both are part of our sexual nature, but it's just so refreshingly scandalous to see someone go that far on their <i>own</i> on television ;) 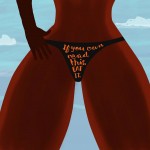