It's time to head back to the nineteenth century, and one Miss Charlotte Brontë. Jane Eyre (1847) is, of course, one of the most widely-read books in the English language. But I wonder about the kinds of readings that are to be had here. And I wonder what I'm getting out of this book that would have gone over the head of Brontë, as a white woman from a colonising nation. These are sensibilities supplied by Jean Rhys' parallel novel Wide Sargasso Sea (1966), as we will see.

Jane Eyre is the focus of a lot of adoration. It's full of a haunting gothic atmosphere—the red-room scene will stick in your mind, all right—and a romance surviving across divides of age, wealth and status. Jane is the orphan who becomes a teenage governess in an isolated English country home, Thornfield. She falls in love with her employer, Mr. Rochester, only to discover on their wedding day that he's married already. His wife is a madwoman locked in the attic, whom he was tricked into marrying by his father and brother. Jane runs away, and the wife, Bertha, starts a fire which maims Rochester and destroys Thornfield before she kills herself. Jane returns, marries Rochester, nurses him into somewhat better health and we have our happy ending.

No, no we don't. For a start, miracle cures and disability as a plot device make me rage. Rochester might love Jane, but he's also manipulative and overbearing. Jane's a gorgeously strong heroine ("women feel just as men feel"), and there are some lovely moments of examining class and charity. But the novel is peppered with negative references to non-white people and features, and I am always suspicious of the silencing of women characters, through, well, the madwoman in the attic figure, which is after all named for Bertha Rochester.

When I was in high school, a member of the English department walked up to me one day and pressed Wide Sargasso Sea into my hands. She had a glassy agony of love in her eye which I immediately recognized as that of a booklover communicating how very extraordinary a book is. I had a free period later that day and, by the time the bell rang for my next class, I had trouble rejoining the world for this masterwork in my grasp. It's the perspective so painfully missing in Jane Eyre, that of Bertha Rochester. Rather, it's the life story of Antoinette, the Creole woman who Mr. Rochester renames and reshapes in his desired image.

The thing is, Jane Eyre is an excellent novel in its way, but Charlotte Brontë wasn't writing for people like me. That's a constant experience for this disabled, non-white lady, a slow, othering slide of a knife in the chest. This is why Wide Sargasso Sea has been so important to me in filling in those aching gaps that usually never get addressed. Here is a character to whom I can relate in ways in which I cannot relate to Jane—a character who is buffeted about by attempts to control her and her racial experience. It's a book in which the humanity of non-white people, and people with mental illnesses, is acknowledged in some really visceral ways. It's full of associations and experiences and images with no sugarcoating, life on the edge of life. You should be warned that Antoinette drugs and rapes Mr. Rochester; it's certainly not a pleasant novel. It's certainly not a case of positioning Antoinette as a blameless victim, but as a character among full and often despicable characters, with the circumstantial blanks inscribed upon.

It's telling that Jane Eyre is such a popular story; where are the stories of nineteenth century women of color falling in love and living happily ever after? Why do stories about the beneficiaries of colonialism last through the ages, where the stories of the colonized fall by the wayside, if they're ever published? Why is the madwoman usually the plot device or an object of pity, not a person? What is so striking about the imaginations of white women, the stories of sane women, that everyone else must be silent? The world is full of Jane Eyres, and Wide Sargasso Sea is an astounding exercise as to the wealth of experience missing in the literature held up as iconic, as embodying the experiences of women.

I was wondering if you've ever read (or heard of) The Eyre Affair by Jasper Fforde. It's a science fiction novel, the first of a series, that takes place in an alternate future where all aspects of life are based on literature, and special police forces are capable of going into the universes of various stories. In The Eyre Affair's own universe, Jane Eyre originally has a completely different ending, with Jane leaving Rochester for good and traveling to India to accompany her cousin, a missionary, an ending which no one really likes. Through various fantastical plot twists, however, the story becomes irreversibly changed to the narrative we all know, although Bertha's death is now murder, not suicide. It's a pretty silly book, really, very action-oriented, but it's a lot of fun, and brings up concepts like plot devices and deus ex machina, and why certain storytelling elements are so popular despite their social or even logistical problems.

I have read it! Jasper Fforde is quite a talent.

why would you write that Antoinette drugs and rapes Rochester? Jeez. Did your glassy-eyed mentor give you the same caveat? Let the reader reach startling plot points without any spoilers, please.

I would write that in order to prepare <em>survivors of rape</em> for that fact, so that they don't sustain <em>psychological trauma</em>. She was not my mentor. This is a book analysis; obviously there are spoilers. For goodness' sake.

Anonymous, in order to analyze the book and provide her thoughts, Chally clearly needs to reveal key plot points. Also, as she pointed out, rape and trauma survivors might want to know that a rape occurs before reading the book.

Thanks to the author and to wrappedupinbooks for the reminders of books I need to read or re-read in 2011. Jane Eyre is fantastic for an anglophile like me. But I'm also a non-white anglophile which makes the Jamaica Kincaid suggestion awesome.

I've also shared the link with other literary criticism types, some of whom are MY mentors. Anyhow, on the subject of spoilers, real literary fiction resists paraphrase so knowing some plot points isn't going to ruin it for anyone experiencing the book. It's not Twilight, after all. :-) And now, the Twihards hurl Kindles my way.

What a great phrase, and so true!

Oh, brilliant, thank you so much for that recommendation!!

I adore Wide Sargasso Sea! One of my courses in college was "Twice Told Tales" where we read a "classic" like Jane Eyre and then read a "retold" post-colonial lit version of the story (Wide Sargasso Sea in this case). It was so interesting to really see and discuss the juxtopositon of two very different novels.

If you like Wide Sargasso Sea, try reading Robinson Crusoe and then Foe directly afterwards. Foe is another favorite of mine about the woman who is deleted from the history of Robinson Crusoe's published narrative.

I taught Foe (which I LOVE) last semester, and my students hated it! So disappointing...

It's very trouble-free to find out any topic on web as compared to books, as I found this article at this web site. 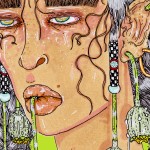 by Diane Shipley
After decades of erasure, the tide is turning.